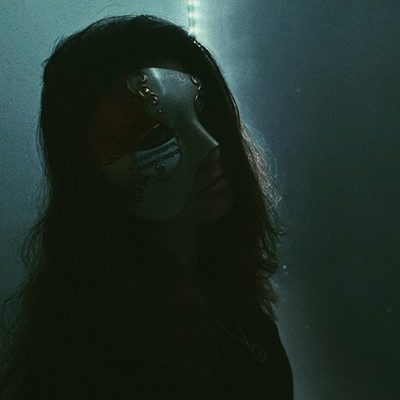 The track is Sade-smooth with JoJo-dreamy vocals that curl inside your earbuds and nest. Charming harmonies add velvety layers to this already evocative ballad about loving and losing.

Chased with soothing synth, “Phantom” is a bop that exposes ANLIL in her rawest, most vulnerable self. Prepared to leave it all on the lyrics, she delivers on relating and resonating with the pieces each of us are desperate to put back together.

“The intention behind writing ‘Phantom’ was being as vulnerable as possible,” ANLIL explains. “I had just closed a chapter of hardships in my life, and struggling to keep steady; to see eye-to-eye and tolerate those closest to me. I didn’t have any intent for what I was about to create.”

The Toronto/Vaughan-area artist is making her mark with her newly minted trademark dark, romantic pop-infused storytelling. Finding herself deep in the roots of songwriting and creative processing, ANLIL has nabbed working with producer Sunny Diamonds (Toronto), the mastermind behind mixing and cutting her records.

“Phantom” marks ANLIL’s highest streaming single to date. A track that was birthed of the ability to overcome struggle and what it feels like to pursue the world through the lens of sorrow was a track that essentially built itself.

“It started with synth chords, a bass line, and I then slowly began to sculpt the skeleton of ‘Phantom’ in the basement of my parent’s home,” she says. “I wanted to write about how I felt, the built-up tension from my pain.

“‘Phantom’ tells a story of a lonesome soul roaming from city to city, desperately trying to grasp onto a feeling of “home.” The feeling of being alone, like a ghost and the struggle of abandonment was what influenced the words and held the structure of the story for ‘Phantom’.”

ANLIL once again teamed with Sunny Diamonds to mix and record the track and enlisted Mike Bozzi for mastering. Unabashedly laying it all on the line, ANLIL has also released “Phantom’s” subsequent follow-up, “Scars”; another near-diary entry that draws the listener even further into her alluring story of life and living through the ebbs and flows of it.

Check out the lyric video for “Phantom” below, and find out more about ANLIL via our mini-interview.

My name is Anlil, I’m a singer/songwriter, musician and producer out of Toronto. I’ve gone through a long and hard journey and have always used my music as an outlet to open up and to be vulnerable with my audience. Music has always been a big part of my life since I was a kid. The latest music I’ve released have captured the last 7 years of my life. There is definitely a lot more to come and I’m so excited to share more.

Tell us about the recording process behind “Phantom”?

Phantom was a freestyle originally on my guitar. I didn’t have any plan of what I was going to create, I just knew what emotion I wanted to put into it and words I wanted to use. I started with a simple bass, synth and started to just play over with a select few sounds while on loop to catch the right chimes. I wanted to focus on the vocals more than anything on this project, it’s the lyrics that matter most to me. I even kept the drum pattern having an “off-beat” feel on purpose to compliment the brokenness of the meaning behind the record.

Definitely working and being mentored by Che Pope. His advice on marketing and production as well as personal advice he’s shared helped me develop as an artist. I released my single Disaster under Che Pope’s “WRKSHP Media.” Another highlight was working with Grammy Award Winning Engineer, Dacota G on my record Villain. It was my first self-produced single. Dacota G is so talented and knew exactly how to bring the magic into mixing Villain.

I’ve been focusing on getting to know my fans more. My goal is to grow my fan base and get in front of them, all over the world. Regardless of how big my fan base is, I want to be able to know who’s listening to my records, why they prefer one song over the other, or what makes them relate to my music. So far I have met some of the most amazing fans with very similar yet unique stories to my own and why they’re drawn to certain songs. I love my fans and I just want to get closer to them.

I would love to collaborate with one of my favourite producers Pharrell. I think he’s absolutely genius. The way he creates is so inspiring. I would also love to also work with Kanye, he’s just so different. I’ve been a fan since Graduation days. If I could open up for anyone I would love to go on tour with Khalid someday and Billie Eilish, too!\