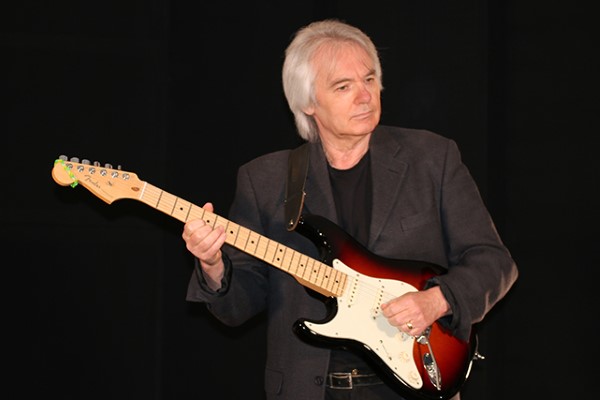 Co-written with Cyril Rawson, “Moments” is a quick and powerful, classical-inspired folk ballad which contains a myriad of beautiful acoustic guitar arrangements; it features a haunting, Led Zeppelin-esque flute melody, and endlessly visceral vocal harmonies by not just Haggarty, but backup singer Kate Suhr as well.

Because the music itself is so emotionally enticing and speaks for itself, its accompanying music video is simple and stripped back — all it really needs to be. The two-and-a-half minute short sees the Peterborough, Ontario-based musician, in all black and white, singing along in a studio, as he stares pensively into the camera’s eye.

Though Haggarty has yet to disclose exactly what inspired him to write “Moments,” his lyrics are telling and vulnerable enough to give at least a vague idea. It’s all about love, and a reflection on it — whether that be all the good times shared with a lover or the bad; many of the branches and intricacies that, over time, managed to keep an intimate bond so strong.

Throughout the video, shots of candlesticks and old family portraits — as well as the typed-out lyrics to “Moments” — are interlaced with footage of Haggarty and the magnificent Suhr performing their hearts out in respective recording rooms of the veteran musician’s home studio: Haggarty Sound Studio.

Check out the video below, and find out more about Barry via our mini-interview.

My Name is Barry Haggarty.

I’m a guitar player, and singer-songwriter from Peterborough, Ontario.

I’ve worked in music my whole life….playing in bands, writing, and recording.

My latest project is called …Consider Me Undecided… which includes my new single…Moments.

I also have my own recording studio…Haggarty Sound Studio.

Tell us about the recording process behind ” Moments”?

Recording Moments was a lot of fun.

I wanted to keep it fairly acoustic sounding but with a certain amount of energy.

I started with acoustic guitars and then figured out where I wanted to take it musically.

I ended up having Gary Craig on drums and Andrew Affleck on bass which certainly added that energy.

I then programmed some orchestral lines and added Kate Suhr on background vocals, which took it to another level for me.

The pan flute was a bit of an afterthought.

I originally was going to use a guitar to play the signature lick of the song…once I heard the pan flute I felt that was the sound.

The highlight of 2020 was finishing my album…Consider Me Undecided.

As bad as Covid was and is, it gave me a chance to get more work done on my project.

I’d like to carry on releasing more singles and videos.

Playing live shows is a must!

I really miss playing on stage with other musicians.

Hopefully, I can book some shows in the near future.

For me, that person would be …Paul McCartney. I dream big!

After all, he was a Beatle!!