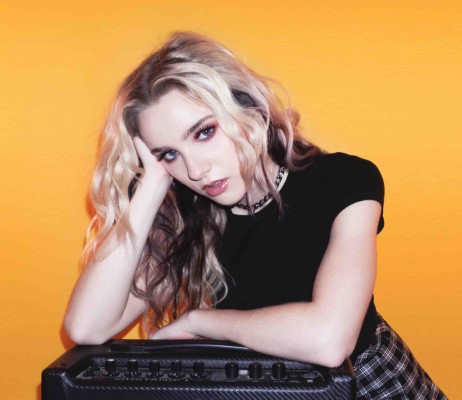 Rayne is exploring the darker side of love and relationships with her debut EP False Love. The Vancouver songstress released the first single “Envious” in 2020 and now has over one million radio impressions nationwide.

Her career trajectory has been steadily rising since she began co-writing in 2018. After submitting demos across Toronto, she caught the ear of an executive at Live Nation Toronto and secured a spot playing the 2019 River Rock Stage Pre-Show for GRAMMY winner Billie Eilish. Her demos reached Timbaland Productions / Mosley Music Group in Los Angeles where she was asked to write lyrics for Zurich-based producer MilliBeatz (Kehlani, Rihanna, Bryson Tiller). Her second single “The Low” emerged from those sessions and has earned more than 350,000 streams on Spotify.

With the release of her six-track EP, Rayne is delivering her signature soaring choruses and melodic pop gems. We caught up with the budding pop songstress to learn more about her journey as a songwriter, conveying her emotions through her music, and her dreams for the future.

As someone who’s been performing and entertaining since childhood, was a career as an artist always the dream, or did it evolve as you got older?

It’s been my lifelong dream and passion to be a performer! I think watching Hannah Montana as a kid was what really made me want to pursue music, minus the secret identity. I was very driven from a young age to be successful with my music, and I never really deviated from that plan.

When you really began to take those steps to pursue a career in music, did you have a clear idea of the type of songwriter you wanted to be? Or did you have to discover your style as you progressed?

When I was 10 and first started songwriting it was frustrating for me. I couldn’t write the type of music I wanted to release as a pop musician. Everything was either too folksy or indie sounding. I always had a general idea of what my style was, I just struggled to create it as I didn’t yet understand the discipline of pop songwriting. Now that I know the rules, I’m a lot more comfortable breaking them in my music and redefining what ‘pop’ means to me in every song I write.

When you started writing for MilliBeatz, were you brought in to write potential songs for other artists? Or were these always your songs from the get-go? How did that process work?

I wrote ‘The Low’ with the intention of it going to another artist. After Anthem heard the song and my vocal performance on the track, they decided that they wanted to sign me for a single deal, and have me release ‘The Low’. Something I haven’t mentioned before is that ‘Sour Candy’ was originally also written for someone else! After hearing the demo, I decided that I wanted to be the one to perform the song, so we rescinded our pitch to the artist we had originally written it for.

How were you feeling in those early moments of writing the songs that would then become a part of False Love? Were you feeling any anxiety around finally putting your own music into the world? Or were you more eager and ready to showcase your talents?

I was really excited! I’ve been a musician for ten years now, and have only been releasing music for a year and a half of that time. This is something I’ve been wanting to do for what feels like forever, so I’m past any point of anxiety that I might have had five years ago if I were releasing an EP then.

This EP really explores the harder parts of a relationship, but each track has its own unique melody and overall vibe. What was the process like diving into the type of emotions you’re going through on this EP?

It was a lot more fun than people would think. Being a songwriter isn’t all crying about some terrible breakup and then creating a song out of those emotions (or at least it isn’t for me)! It’s very collaborative, with all of us drawing from our own experiences and shooting out random ideas until we find something that sticks. I like to keep it lighthearted and fun in the studio, even when we’re writing about tough subjects because that way you don’t ruin good ideas by overthinking them.

As the EP begins to resonate with current and new fans, are you already thinking of what’s next? Or are you the type of artist who prefers to really soak in a release before jumping into another project?

I’ve spent so long waiting to release music over the past couple of years and I’m tired of it! Just sitting on finished songs never made sense to me, I’m very much a person who wants to keep the ball rolling, especially without live performance to support my releases. So yes, I am already planning my next moves and have some really cool stuff planned for later this year!

Once touring becomes an option for artists, are you planning on getting out onto the road and playing the EP live?

I definitely hope to! Unfortunately, we don’t have any live performances lined up right now, but I’m really excited for things to fully go back to normal so I can get back up on stage!