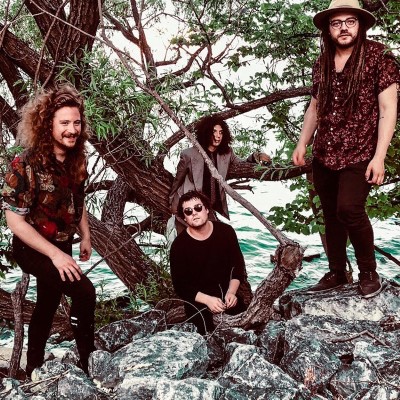 Toronto-based rock band Harm & Ease just released their new single “Cut Me Loose” on July 16 via all streaming platforms. “Cut Me Loose” is an upbeat modern rock anthem that showcases the band’s unique sound and dueling lead singers in a track that puts the subjects of love and betrayal into play through a dramatic yet action-driven storyline.

Discovered by Multi-Platinum and JUNO Award-winning artist Gianni Luminati of Walk Off The Earth, they’ve already gained the attention of fans worldwide, accumulating over 2.2 million views on TikTok for their “Cut Me Loose” acoustic performance in Trinity Bellwoods Park in Toronto.

“I first saw the band in a small club in downtown Hamilton ON in the summer of 2019. I was immediately enamoured by their playing and their ability to have the whole club up dancing and rockin’ out. After meeting the band after the show I was very intrigued by their story and how the members from 3 different countries were brought together by friendship and a love for music. I offered to represent the band as their manager and they were very happy to oblige. We’ve been working hard over the pandemic on all facets of the Harm & Ease project and are ready to take the rock world by storm,” said Gianni Luminati.

The band recorded and debuted their first two albums “Wonderful Changes” and “Black Magic Gold” in Buenos Aires, and found themselves reaching an international following as they took over the South American rock scene. They then relocated their home base in Toronto to record their third album Midnight Crisis. The band recently recorded a single with Grammy award-winning producer Joe Cicarelli (Elton John, TheFoo Fighters, Morrissey, The Raconteurs) entitled “Nothing More Than Love”.

The band has also sold-out shows across Argentina and toured around Ontario, playing the Sound of Music Festival, Ontario Place, and the OLG Stage. They have performed with incredible artists such as Walk off The Earth, illScarlet, Monster Truck, and Tom Wilson.

How did you write such an energetic song during a time like a pandemic?

Alex: Well fortunately throughout the pandemic the band has been living together. We really help bring each other’s best selves out charismatically and especially as songwriters and musicians. One of our goals over the pandemic has been to write and record our best possible work yet. We’re definitely hungry to be back on stage performing live again and I think a lot of that anticipation has been put into creating the most highly energetic music that resonates with people for whenever we perform next. “Cut Me Loose” is a perfect example of that fiery rock energy that we can’t wait to unleash during our live performances.

Do you hope your sound in the song will resonate with the first crowd that dug your music back in Buenos Aires?

Alex: Absolutely! I believe this song has lots of the same energy that comes from the performance lifestyle the band experienced in Argentina. I would say Argentina is known for their amazing rock music as well as their absolute love for the genre, the spirit of rock and roll is definitely alive down there. I believe our fans in Argentina will be ecstatic to hear the powerfully rocking energy in this new single with fresh ears. It’s a change from what they may have been used to hearing, but in a really good way. Our friends there have been going through tough times during the pandemic and we hope this release brings them the uplifting energy they deserve.

Fans heard the song before it was released on TikTok. Was that part of your strategy to promote the song?

Alex: It was definitely something out of the ordinary for us. We posted a video of us performing “Cut Me Loose” in the park and overnight it reached 2 million views on TikTok. It was such a cool experience seeing so many people duet the song and use the sound in their own videos. The lyrics in the chorus “What happened to the girl I knew” really resonated with a lot of people, and it was powerful and inspiring to watch the song blow up. We knew we needed to release the song straight away. So, we recorded the song at Cosmo Cat Records Studio, and it was then further produced and mixed by Tawgs Salter.

How has the band grown since Gianni Luminati first discovered you?

Alex: The band started making music originally in Burlington, Ontario back when we were in high school, and we always thought it would be amazing to meet Walk Off The Earth (who are from the same town) and maybe one day make music with them. After our years in Argentina, we got signed by Cosmo Cat Records here in Canada and Gianni happened to be in the audience at one of our shows. Shortly after, he approached us about working together, and ever since then we’ve progressed in a lot of ways under his mentorship. Gianni has a very strong ear and he’s pushed us to dig deeper into melody and lyricism in a way we never have before.

Anything else to add for fans to know?

Alex: We want our audience to know that we couldn’t have gotten through this pandemic without them. The absence of live shows was a huge challenge, but we didn’t let it stop us from doing the best we could and from staying in touch with our fans. The fact “Cut Me Loose” did so well online is a testament to our fans and to the love of Rock & Roll. It’s just the beginning of the new chapter Harm & Ease has entered and we want all of you along for the ride.