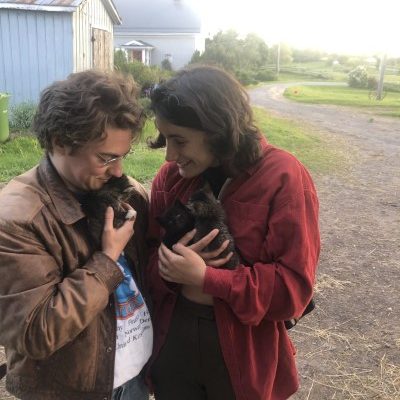 When the going gets tough, quite often, the creativity flows even faster. That was definitely the case for Director Katie Clarke & artist T. Thomason when they teamed up for two-part project, “Lovers in a Dangerous Time”. In Katie’s words,

“first, a sweet, messy, and intimate music video featuring someone I love very much, and second, a short film sharing stories of different queer folks’ love stories in pandemic times. Queer love contains multitudes, and this project is a small snippet of queerness. Lovers attempts to translate a transformative kind of intimacy that is both domestic and wild, with a visual focus on the natural world. For me, nature has always felt like the easiest place to be queer—without definition, certainty, or solidity, but rather, with a willingness to change and grow.”

The concept of the documentary seems to have come from a very personal place to start. Was there a moment or instance that you thought “welp, we have the time. Let’s do this!”

Katie: When T. first suggested this project, neither of us really knew where it would lead. We made a call for queer pandemic love stories on socials and received so many beautiful, heart-warming, tender submissions from friends, acquaintances, and strangers alike. After that it grew into a much bigger, more generative and exciting opportunity for both of us to create and collaborate—beyond the music video, which felt very personal. I think we were both too excited to let it be just one thing, or only reflective of our personal pandemic experience.

T.: I remember sitting in the kitchen with Katie and watching a video submission we had received. Initially, we thought we would use people’s video clips as part of the Lovers in a Dangerous Time music video, which we did, and then maybe in some social media content to promote it. When we saw how vulnerable and candid the videos people shared with us were, we knew the project had to be bigger to honour those stories. That was a really exciting moment.

What was your favourite part of the creation process for the music video as well as the documentary? The most challenging? The one you couldn’t wait to be done with?

Katie: My favourite part of creating the music video was filming little snippets of T. One of the things I love most about T. is the way he sees the world, especially nature; there is so much elation and awe in him. His whole being lights up when he watches eagles overhead or sees a deer at the edge of the woods. I love being in nature, and feel my best outside, but I’m often caught up in my own world, moving a million miles an hour. T.’s wonder makes me slow down. His moments of genuine joy and unaffected admiration for the world around him were so special to catch on film.

With the documentary/short film, there was so much joy in watching everyone’s stories—especially their little fumbles, blushes, and giddiness. Nonetheless, crafting a comprehensible flow for the storyline was really difficult. It took many drafts and lots of input from a whole host of viewers (to whom I am very grateful!).

Overall, working with a partner (even one as tender as T.) is definitely tough! It can be hard to work with such a narrow focus for so long—I think we’re both really excited to have a break and just enjoy each other’s company for the next little while.

T.: My favourite part was watching back the videos people sent us. It was such a thrill when Katie’s email would ping and it was a new submission. It was exciting to get such an intimate look at how the last year and a half affected people, many of them total strangers. It felt like such a privilege to be trusted like that and emotional to recognize parts of my own pandemic experience, which had felt so isolated as I was living it, in other people’s stories.

I’d echo Katie on the challenge! Haha. I loved working with Katie on this project, and I’m honestly really impressed by how well we communicated through it all. I think we learned a lot as partners as well as collaborators. That being said, I am definitely looking forward to us being able to just chill and put our screens away!

What inspired you to name the documentary after Bruce Cockburn’s “Lovers in a Dangerous Time” and, in turn, cover the song? Was the cover based more on the original or the Barenaked Ladies’ version?

T.: Lovers in a Dangerous Time came back to me when Katie and I were stuck in lockdown together by surprise in April. It just seemed so relevant to our situation and I’d had such a blast playing it live with my band over the years, especially at Pride festivals. Everything I had planned was being cancelled as COVID in Nova Scotia got worse, so doing a cover seemed like something that could just be a lot of fun and kind of off the cuff. At almost the same moment, I realized I was in lockdown with one of the most creative people I know and it just seemed like it made sense to turn it into a collaborative project with a video element. Katie has made some really sweet short films documenting previous summers and I loved the feel of those little guys. I knew Katie could make something really gorgeous in that same spirit and lean into the DIY/home video vibe, which was all we had available to us in the circumstances! The doc was part of the whole LIADT project so it made sense to tie them together by name.

In terms of the cover itself – my favourite version is the original by Bruce Cockburn, but I tried really hard not to listen to any other versions in the process of making my rendition so that we could approach it as a totally new thing. I know Cassie Mann and Joel Waddell (the two other producers on the track) are big fans of the 80s so I have to think they would have been inspired primarily by Bruce’s version.

Katie: This was T.’s genius! The whole project started with his cover of Lovers—which he’s done at Pride Festivals for years. He proposed this project & sang Bruce Cockburn’s Lovers In A Dangerous Time to me on his acoustic guitar while I lay curled around him on the couch. T. reclaimed the song as a queer anthem with his stunning voice & intricate harmonies. I wanted to capture how it made me feel—and the tenderness and joy we are so lucky to share.

How did you choose who to feature out of your fans/friends?

T.: This was the hard part and I left it up to Katie!

Katie: We got so many submissions, and we tried to feature everyone we could fit (although not all of them did, unfortunately). I mostly selected clips and stories based on the flow of the overall narrative—trying to highlight commonalities or contrasts between folks’ experiences.

What are your plans for the documentary over the next few months?

Katie: I’m mainly just excited to share it with people, and hoping that it brings joy and levity to those who watch it! It’s a fairly untraditional (and unpolished) style, so I’m intrigued to see the response it’ll get. We’re also submitting to a few queer film festivals!

Related ItemsDocumentaryKatie ClarkeLovers In A Dangerous TimeT. ThomasonWhat's The Story PR
← Previous Story Interview – Niz Wiz
Next Story → Harm & Ease are easing into the summer with their new single “Cut Me Loose”