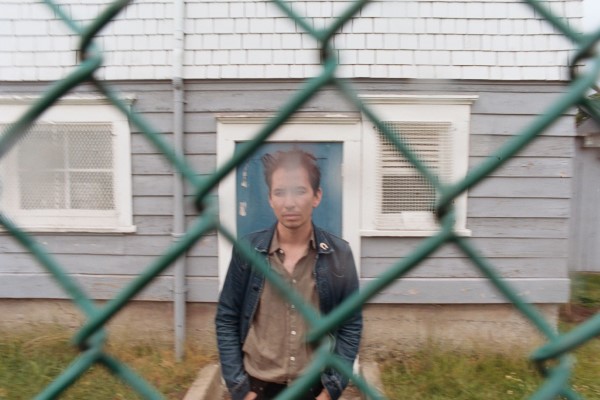 When he set out to record Strange Calm in early 2020, Yip was trying to say goodbye.

“I was dealing with a lot of climate dread, and at the same time, I could feel my musical life being pulled apart by different but equally powerful forces,” says Yip. “The songs on Strange Calm reflected these anxieties, and somehow helped me make peace with them too. It’s a meditation on learning to live with the death process.”

Just as the recording session for Strange Calm wrapped, the pandemic had reached the shores of B.C. By the summer, Yip decided to record a second short collection of songs to release with Strange Calm, a decision that coincided with the start of a new chapter in his life: fatherhood.

“I committed myself to recording more music, booking time at the studio before writing a single song. Almost immediately after doing that I learned that I was going to be a dad.”

The result is the second EP, Blushing Autumn.

Now, Yip is sharing the first two tracks from the double EP, “Gin Fizz”, which arrives with a video from director Lester Lyons-Hookham, and “Halcyon Dream”.

The catalyst for “Gin Fizz” arrived for Yip while on a beach during his honeymoon.

“We arrived on a grey and wet day and spent the afternoon avoiding flash storms in beach bars. Towards the evening the weather cleared, and we sat drinking on the beach just taking it in. The last drink she ordered was a Gin Fizz. Up to that point in the trip, I had been unable to leave my anxieties behind. I’d been fretting about all of it: money, work, music, family – you name it – until we landed on the beach. The island was strangely empty and the weather was terrible, but none of that mattered. I felt light and free in a way that had eluded me for a long time. It’s a rare thing to feel that kind of happiness, the kind that you know you’ll remember acutely, long after it has passed. But that was one of those days.”

“Halcyon Dream” is a song about

“endings, big and small; a lament for my 20s and our carbonized atmosphere,” says Yip. “It looks backwards and wonders if the past was as lovely as you remember it, while quietly acknowledging that it probably wasn’t.” The song arrived fairly quickly, after a writing inspiration exchange with Yip’s good friend Wallgrin. “They came over on a rainy weekend afternoon and we sat side by side at my piano and traded ideas for a few hours. From there we started sharing voice memo ideas with each other on a regular basis, and in a way, it gave me a reason to start writing again. I’ve always made music out of an urge to feel closer to other people, and in this case, I suppose I started writing again to feel closer to them.  One morning soon after, I sat at my piano and wrote the chords for ‘Halcyon Dream’ and the opening lines appeared; ‘Where to begin? / It’s all starting to end’. I sent it to Wallgrin and finished the lyrics quickly while texting with them at the piano. It happened so fast, I suppose it had been there for a while.”

Jasper Sloan Yip and his band arrived at The Noise Floor on Gabriola Island to record their Strange Calm with producer Jordan Koop (Orville Peck, Wolf Parade, Rae Spoon) on March 14th, 2020, just as life on the west coast shut down.

“It was surreal. On one hand, it felt like an isolated recording studio was the perfect place to make an album about the end of the world, but on the other, we also understood that at any moment one of us might start showing symptoms, or we may be ordered by the province to pack up and go home. This tension was infused into everything we did.”

ly, the band left the studio the following week healthy and joined the rest of the world in lockdown with six completed songs. Their tentative plans to return to the Noise Floor the following month to complete the album were canceled, and Jasper, like everyone else, started to wait.

With the album ostensibly finished and nothing else to do, Jasper began work on a six-episode liner-notes podcast titled ‘Strange Commentary’ to accompany the album. Spanning over 100 minutes, these audio liner notes paint an intimate picture that completes the songs on Strange Calm while extending far beyond them.

“Strange Calm is shaped by its incompleteness. When I listen to these songs, I hear the music that isn’t there, and that’s ok. The podcast helped me let it be by giving me another way to finish the story,” says Yip.

Exactly one year after arriving on Gabriola Island to make a record about the end of the world, Jasper and his band were setting up at Afterlife Studio in Vancouver with producer John Raham (Destroyer, Tanya Tagaq, Frazey Ford) to record Blushing Autumn, four songs about Yip’s upcoming fatherhood and the promise of new life.

“We all spent a year inside. Not just in our homes, but inside of ourselves,” says Yip. “For me, it began with the surreal experience of life imitating art in a scary way. I was ready to accept certain fates… But it didn’t go the way that I expected, and now, the strange calm that I was struggling with for so long is gone, and the world feels new again.”