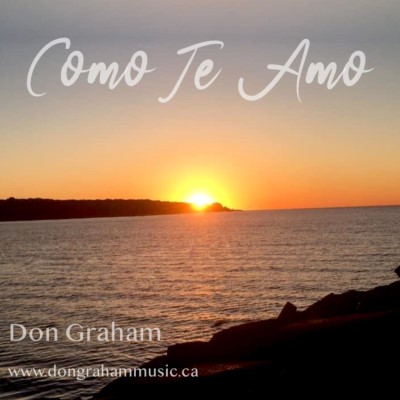 Canadian singer-songwriter Don Graham has set out to turn your summer day into a romantic tropical getaway with his new single, “Como Te Amo”.

Inspired by a last-minute holiday Graham took to Guyabitos, Mexico, “Come Te Amo” recalls a beautiful but bittersweet moment in time in an equally beautiful place set to a rollicking country-rock soundscape.

“It’s easy to fall in love in Mexico with the sun, the sand, the magical moonlight and the warm ocean waters,” Graham says. “Unfortunately, the week ends and you come back to reality…

“But, always have those beautiful memories and the hope to someday return.”

“Como Te Amo” translates to “how I love you” and, whether they’re spoken in Spanish or English, these are words that everyone longs to hear. “If you don’t speak the language your Spanish phrase book becomes your best friend,” Graham explains. “When a lovely senorita catches your eye, the little book allows you to convey your feelings.”

Check out the video for “Como Te Amo” below, and find out more about Don via our mini-interview.

I’m Don Graham, born and raised in that hotbed of country music, Montreal, Quebec. Seriously though I get asked that a lot, how a kid from a big urban city like Montreal got into country music. It wasn’t a natural thing because Montreal had no country station back then. On a clear night, I could get the radio station WWVA out of Wheeling West Virginia. On Saturday night they had the Wheeling Jamboree with live acts, Merle Haggard, Buck Owens, Johnny Cash, and all the top names. I was drawn to the songs, and the sound, and the southern accent. The only accent I heard in Montreal was French Canadian. When I was 12 or 13 I bought a Stella guitar from a pal of mine for 50 cents and a pair of hockey shin pads. The action was so high I could fit my Dad’s Zippo lighter between the strings and the fretboard. Then the “Great Folk Scare of the 60s” happened and I got into folk, which was acoustic country music to my ears. My North Star was a singer/songwriter named Eric Andersen who was taking the folk world and the Village in New York City by storm. Ironically many years later not only did I get to meet Eric but I got to open for him at the iconic Hugh’s Room in Toronto. And this year he asked me to record a song of his called The Hustler to be included in a tribute album to him “A Tribute To A Songpoet, The Songs of Eric Andersen” that will feature artists Linda Ronstadt, Jackson Browne, Mary Chapin Carpenter, Bob Dylan and many more.

I put together a band in 1970 called Graham County to support a record we had out and we toured the country playing a mix of country, electric folk, old rock, and roll. We toured extensively and when the band broke up I continued as a solo performer.  This year a song of mine I recorded in 1972, “Colorado” on the Kapp label was picked to be included on a compilation disc called Still Sad on Mexican Summer Records out of New York City. There will be a vinyl record available of this collection shortly.  In 1980, I was signed to A&M’s publishing arm, Irving Almo as a staff writer, the same year as Bryan Adams and Eddie Schwartz. I have been fortunate lately to tour in the 2000s to places like Norway, Sweden, Austria and showcasing at the prestigious MIDEM in Cannes, France, playing festivals and meeting great people. In 2017, I wrote a song called “I Just Called Him Dad” that I sent to my friend and producer Norbert Putnam (Kris Kristofferson, Joan Baez, Jimmy Buffet, and Dan Fogleberg) in Muscle Shoals, Alabama and I went to the Shoals to record it with Norbert producing, It was a star-studded band on the tracks with James Leblanc on guitar, Milton Sledge, who is one the original G Men in Nashville and has played on every Garth Brooks record since 1989. On keys was Randy McCormick, a Nashville/ Muscle Shoals session man who is most famous for playing the opening piano lick on Bob Seger’s Old Time Rock & Roll. And on bass, Norbert Putnam, who has played on over 2,000 sessions and on 120 Elvis tracks. That leads me to now and the new single video release of ‘Como Te Amo.’

Tell us about the recording process behind “Como Te Amo”?

We recorded ‘Como Te Amo’ in Montreal with Bill Hill producing. Bill produced April Wine’s debut album and a string of Gold and Platinum French records as well as my first single with Graham County. When we recorded our Willing Heart album, ‘Como Te Amo’ was chosen as one of the 11 songs to be included on the album. The songs were picked by a process of elimination, with some songs having to be played a few times to be sure if they were strong enough to be included. Out of about 25 songs, only 11 would make the album. ‘Como Te Amo was one of those that was an instant pick to include on the record. The boys in the band got the feel and message immediately and I am beyond thrilled with the way it turned out; the layered guitars, the marimbas and the feel are exactly what I envisioned when I wrote the song. I wrote ‘Como Te Amo’ after a last-minute trip to Guyabitos, Mexico that I booked on a cold snowy, winters day when I knew I had to get away. The song is about that feeling of falling for someone local while on holiday and the magic of the sun the moon and ocean air, silver sand and golden tans just sweep you into a romantic mood. When you don’t speak the language, the Spanish phrasebook is your lifeline. For seven days you are swept away and the parting is such sweet sorrow when the weekends.  The track was so uplifting to me and so authentic to the way I felt that I did the vocal in one take.  I hope you all enjoy it as much as I enjoyed recording it.

At the very beginning of 2020, I had visions of it being an incredible year. In 2019 we had laid the groundwork and built momentum that ensured us that 2020 would be a bumper year.  We had a major Showcase in Cannes, France at the international gathering of music folks at MIDEM where we got to be part of the Cashbox Caravan, a talented group of performers from all different genres. We played at different venues and got to show our music to people from around the world as they had gathered for the MIDEM conference. From there we went to Örebro, Sweden to Live At Heart to do the same thing. We made many new friends and contacts and were making plans for 2020. I also had studio time booked in Muscle Shoals, Alabama for the end of March. And then on March 17, 2020, everything changed and the wheels ground to a halt. The deadly COVID pandemic forced the world into lockdown. Festivals and all live performances were cancelled or postponed as a period of isolation enveloped the globe. Travel outside the country was not possible and for a while even travel outside the home was prohibited. This sudden change was daunting and challenging but musicians and performers are a resilient breed so we had to make the most of our situation. I used the time to write songs, and do virtual shows and make music videos to stay in touch with my fans and friends. And we officially released our Willing Heart album, although the restrictions watered down the release and it was made available digitally.  So all in all, although 2020 wasn’t the best year it wasn’t the worst and I used the year to work on areas of my career that needed work.  Onward to 2021.

I looked forward to 2021. The year 2020 was like a long rain delay in a baseball game. The field is covered in a tarp but the players have to keep sharp and ready the minute the game resumes. At this point of 2021, the skies are starting to clear and the tarp is being removed and we’re getting ready to resume the game. We have released our new single ‘Como Te Amo’ and we’re pleased with the reaction so far. It’s an upbeat summery song and hopefully, it will get people smiling again. We are back on track for live performances and are scheduled to return to Sweden in September to be a part of Peter Astedt’s new festival, Future Echoes. Last year Sandy Graham at Entertainment Music Group (EMG) produced a hugely successful Earth Day celebration, ‘Heal The Earth’ that I got to be part of with my song ‘You Can Count On Me’. The video concert featured amazing talent like Tommy James, David Pomeranz, Murray McLauchlan, Alan Frew, Larry Gowan, Paul Saunders, Marshall Potts and  Tom Jackson to name a few and a follow up for 2022 is in the works, with live performances both in Toronto and Montreal. I have a version of an Eric Andersen song ‘The Hustler’ that I recorded with the talented John Dawson that will be on the ‘Tribute To A Songpoet: The Songs of Eric Andersen featuring artists like Linda Ronstadt, Jackson Browne and Bob Dylan. And I look forward to getting back out on the road playing for the people again.

That’s an interesting question. I’ve got to share stages with some super talented performers in the past but I guess there are a few I would like to open for. I’d love to open a show for Gordon Lightfoot at some point. Vince Gill would be a treat and Rodney Crowell an honour. There are so many talented people that I admire and respect but in all honesty, I just love to perform so I’m happy to share a stage with anyone, well-known or “not yet famous”. It is just a thrill to be part of a live music event and I love sharing my music and stories with a live audience.