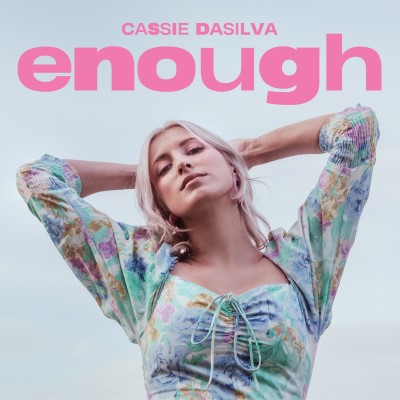 The six-track EP comes on the heels of her 2021 single “I Don’t Trust Anyone Anymore” which has already surpassed 250 thousand streams on Spotify.

When it came to creating her debut, Dasilva set out with a goal — to craft her EP using an all-female production team. She worked with multi-award-winning Canadian songwriter/producers Robyn Dell’Unto and Hill Kourkoutis. At the helm of the mastering ship was Grammy award-winner Emily Lazar.

Dasilva first stepped onto the Canadian pop music scene in 2018 with her Universal Music Canada debut “Welcome to My Castle” and saw the single peak at #8 on Spotify’s Canada Viral 50 chart.

Now, in 2021, Dasilva is releasing music independently and not looking back. We caught up with one of our favourite women in pop to dig a little deeper into her debut EP and what her future in music looks like.

We’re so excited you’ve finally dropped your EP, Cassie! How are you feeling initially now that it’s all out in the world?

I’m beyond excited to finally be able to share this with everyone! I’ve held it so close for the last couple of years– my whole life has revolved around the creative process, and now I get to set it free. It feels like the end of a chapter and the beginning of a really exciting new one.

When you started putting together the EP, what was your thought process behind how you wanted it to sound both melodically and lyrically?

I didn’t have a specific direction in mind at first– I just knew I wanted the songwriting to be more vulnerable and detailed than it has been for my previous releases. I also decided early on that above all, I wanted to have fun making this EP, and I didn’t want to play it safe. I love experimenting with phrasing– taking clunkier words and twisting them to fit together as though they were always meant to, so for most of the writing process I wrote my thoughts down first and then decided how to make everything fit together later. It was fun to experiment with a darker, angstier side of myself for this. I’ve always loved punk-pop and dark songwriting, so it was exciting to build off some of those influences and incorporate them into pop songs– using heavy guitars, big shouty vocals.

We’ve heard a handful of the tracks over the last few months, but there are three brand new songs, “I Don’t Hang Out with My Exes”, “Darkside” and “Enough” that fans are getting to listen to for the first time. What was the process like behind writing and developing those three songs?

Each song came about pretty differently. “DHOWME” was written after I ran into an old friend and her ex-boyfriend. I accidentally assumed they were still together and said something to that effect. The conversation turned awkward pretty quickly (my bad for assuming), but when I walked away I thought to myself, “well I don’t hang out with my exes”. I wrote it down on my phone, wrote most of the chorus in the shower the next day, and finished it off with Frazer Mac and Nick Henriques that week.   “Darkside” was written in the studio with Hill Kourkoutis. The lyrics spilled out pretty quickly and I kind of interpreted them after the fact. It’s about coming to terms with the end of a relationship, at a point where you’re no longer growing in the same direction. “Enough” is the only love song on the EP. I wrote it with Robyn Dell’Unto in Nashville about being broke and in love with my long-term boyfriend (who is also a musician).  I wanted to include it because I thought it was important to show that even though I’ve experienced a lot of heartbreak, there’s a light on the other side of all of that.

You’ve said that, in your experience, “love and heartbreak aren’t sequential.” What has that meant to you in your own relationships and how did that translate into your music?

As a songwriter, I’m constantly pulling from past experiences, and therefore working through a lot of emotions that I maybe hadn’t let myself before. I’ve processed a lot of my heartbreak and frustration while all the while completely happy and in love with someone new. I think there’s this notion that once a relationship ends, your feelings should, too. For me, that’s just not the case, and I have always found it odd that people do that. I’ve tried to be open about that for others who have been in similar situations, even though I know it might present weirdly to some. I’m confident and happy enough in my current relationship to do that.

Do you have a personal favourite from Enough? Or a particular track that you hold closest to you?

They’re all my little song babies– special for their own reasons. I think “Unsolicited Contact” will always be a standout for me because it is the first song I’ve released that really felt like I’d figured out who I was an artist. It’s a pretty cheeky and daring song, and it’s uncomfortably honest– I didn’t change names or specific details when writing it. The outside of the box production on this song really set a precedent for the EP as a whole, and I’m proud of how everything from the song, to the visuals came together. We shot the video with an all female/enby crew, and I hand-made most of the props myself, styled everyone, and even learned choreography for the first time (with my talented choreographer sister at the helm).  The cherry on top was that after all of that hard work and planning, a clip of the music video ended up going viral on TikTok!

Have you started to think about touring now that the world is slowly opening up for artists? What are you most looking forward to when you’re able to perform your EP in person?

I am itching to play these songs live– if someone will take me on tour…(yes, this is a call-out for someone… anyone…  to PLEASE TAKE ME ON TOUR WITH YOU)!! Specifically, I can’t wait to absolutely rock out to “Unsolicited Contact” and “I Don’t Trust Anyone Anymore” and feel the energy of a crowd during that song. Going to have to up the cardio training for those ones.