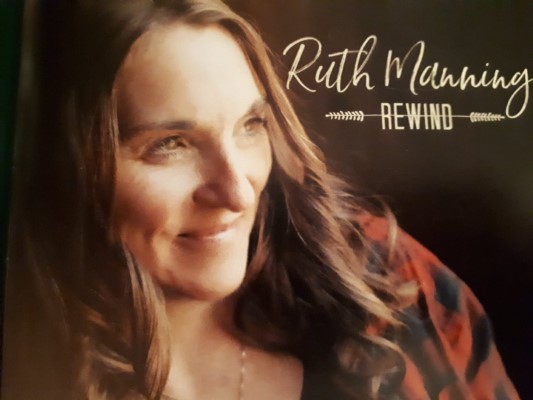 Ruth has been singing for her entire life, performing with many groups including 18 years with the band Triple Time, as well as a maritime tour with Ryan Cook and the Valley Singers.

Check out Rewind below, and find out more about Ruth via our Five Questions With segment.

My name is Ruth Manning and I’m from a very small community in the Annapolis Valley of Nova Scotia, called Prospect.  I’ve been singing from the time that I was about 2 years old when I started joining in with my older sisters.  The three of them performed together as a group called the “Best Girls”.  (Best was our last name.)  For a number of years, we travelled around the Annapolis Valley singing at variety shows, weddings, and festivals.

By the time I was in my late teens, I was the only one still singing.  I sang on my own and with a variety of different groups over the next 25 years.  I have had the privilege to be a part of many festivals and concerts large and small all across the Maritime Provinces.

In 2016, I formed my own band called “Ruth Manning and the Prospectors”.  We have been playing together ever since and have played in many venues around Nova Scotia for a wide variety of events.

Since 2016, I have had several nominations and won a few music awards including a Josie Music Award in Tennessee and a World Songwriting Award both in 2019.

I have recorded 5 full-length CDs including the most recent called Rewind in December of 2020.  The single “Rewind” was just released to radio across Canada in June of 2021.

The songs that I have written are true to the country genre and lean more toward the traditional country sound.  I think it’s important to have a story to tell in a song and I like to share many stories through my music.  I always hope to write songs that will touch people and that they can relate to.  If I can connect with them emotionally, I feel I’ve been successful as a writer.

When the Pandemic hit in March of 2020, I was in the middle of recording my latest album.  It should have been completed that month, however, like many things, it was put on hold.  I was able to complete the recording in the summer of 2020 and followed that with the production of a new video for my song “Angel Wings” in the fall.

In the time since the release of the album in December of 2020, my focus has been the promotion of the new music.  The single “Rewind” was released across Canada in June of 2021 and the band and I are getting ready to get back out there with to play live music in July.

This summer, I also plan to continue writing.  I will be working on some new Christmas material as well as new songs for the next country project.

It’s very hard to choose just one song due to the fact that my songs are written about many things that I am passionate about like family, country life, important people and events in life.  With the release of my latest project, however, I would suggest the title cut “Rewind” which is a fun song about stepping back from the fast pace of today’s life to go back in time and slow down a bit.  It’s an upbeat and fun song that will get your toes tapping.

I really admire the music and songwriting of Dean Brody.  In a day where country music can be far from what I consider to be country, Dean Brody has created music that tells a story and also has a contemporary, popular sound.  His songwriting is definitely an inspiration for me along with the fact that he writes most of his songs on his own, something we have in common.