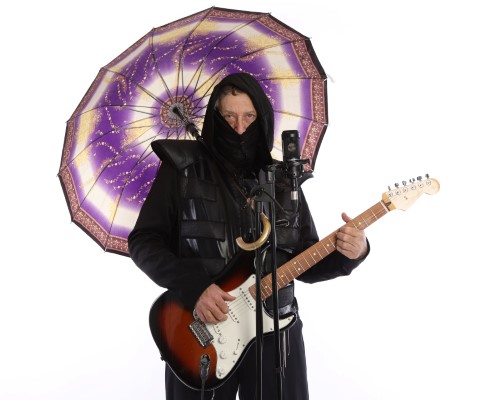 More than a decade after the release of his sophomore album, Ancient Futures (2010), Toronto-based musician Daniel Greenwood has released his highly-anticipated third record, My Blue Beat, under a brand-new moniker: JJ’s Music Retaliation.

Even with the name JJ’s Music Retaliation, it’s quite clear that My Blue Beat could undoubtedly be Greenwood’s most ambitious musical project to date. The experimental sonic mastermind has received great acclaim over the years and after much time away, began brewing an unstoppable wave of rampant inspiration and experimentation. With that, he decided it was time to make a bold comeback to the scene.

First and foremost, the self-titled single of this rollercoaster of a record, sticks out as one of the most experimental pieces Greenwood has ever written. It hones an intensely electronic sound in comparison to the other nine originals. The droning instrumentals and wacky lyrical dynamics leaves the listener in a bit of a dark and mysterious atmosphere, but because it works so well and feels completely different from anything else you have probably ever heard, it really works.

Check out “My Blue Beat” below, and find out more about JJ’s Music Retaliation via our mini-interview.

My name is Daniel Greenwood. I have formed my Band,  JJ’S Music Retaliation, about 5 years ago. I was born in Toronto. It has always been my goal to be original and be as creative as I can. I have been encouraged over the years by the likes of Steely Dan’s Elliot Randal and other well know Artists. I have been told my music is mesmerizing and hooks and draws you into it. A lot of my music has strong drum presence. We are Alt Rock. I naturally write songs Multi Genre where not only different musical influences swirl around you but even different music eras naturally flow. As a Music Supervisor for Major Movies wrote “It shouldn’t work, but it does work and  amazingly!”

I have seen that my music reaches across a huge spectrum of age groups. The most listened to are 35 – 40 years old, but I have also seen 24- year olds up to well over 45  loving the songs. This gives me great satisfaction. I believe in adding humour to my lyrics. We Artists are here to entertain people, not to depress them and feed potentially negative and destructive values to them. My Band members are Daniel G on Keyboards, Daniel G on Bass, JJ aka Daniel G on Guitar, and vocals. JJ’s Music Retaliation is played on Major Internet Radio Stations in The UK, Canada, USA, and  Australia. Now with our new Album out, you will hear for yourselves what everyone is raving about. Yes, even at a Rave the songs can be played, as Jeran told me. Man, your songs are really danceable.

Tell us about the recording process  Behind “My Blue Beat”?

Most of my songs are composed starting with the drums. The drums inspire me and when I feel the fire, the song flows. My Blue Beat is no exception. It has a very funky drum beat which reminds me of those great Soul Singers from a few Generations ago.  I love Electronic and EDM  Music. Analogue Synthesizers always accent my songs and I give them prominent places in my recordings. My next love is a strong Bass to compliment the drums and of course ripping guitar rhythms and appropriate solos. My instruments are part of my family. The other day my Studio was being renovated and in order to protect my Synthesizers, I placed them on a bed in their own room. Famous Artists don’t play guitar or Bass. The instrument becomes an inseparable part of them. That’s why when Jimi Hendrix, BB King played their guitar, it became an extension of who they were. Their musical electricity flowed through the instrument into the amp and into your ears. You could not help but feel it because it was their raw emotions coming out in a musical, rhythmic manner. I try to do the same.

I record multitracks. Sometimes 11 or 12 tracks. It could take maybe 2-3 days or more to finish it. I keep going back to make sure everything makes musical sense and will play the mix on multiple playback devices.  I will then send it out for mastering. I  repeat these processes many times for the same song. Sometimes the song is put on hold until I look at it in a fresh way. That’s why what you hear in my songs has been inspected and listened to so many times until my original concept shines through. My Blue Beat is similar to a lot of songs I write. You will be sweetly delighted at all the changes that happen within one song. They are 3 1/2 minutes of an exhilarating Roller Coaster that you wish just kept going. It does. Just listen to the next completely different song!

My recording of the album My Blue Beat.

Hopefully to tour. To have people purchase my songs. To make people happy through my music, and of course to compose and record many more new songs.