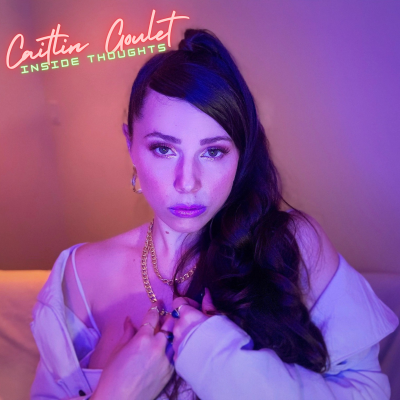 “This project has been a long time coming,” Caitlin says. “A lot of lessons, growth, pain, joy, and fun went into it. I started facing my trauma from past experiences while creating this album. It helped me move through it. I also got actual therapy.”

“In sharing my experience through these songs,” states Caitlin. “I want my listeners to feel seen and know that they are not alone. We all get messed up sometimes. And that’s okay.”

This theme runs its course of discovery, turmoil, acceptance, and celebration throughout “Inside Thoughts.” It is the intimate confessional of a sad-girl gone bad-girl who’s bossing up and healing.

Check out the album below, and find out more about Caitlin via our Five Questions With segment.

My name is Caitlin Goulet, I’m a dream-pop, alternative R&B, and alt-pop artist. My debut album, “Inside Thoughts,” came out on July 9th and is available on all online platforms.

I grew up performing theatre and music from a young age and graduated from Randolph College for the Performing Arts. I then spent some time working in theatre and film, casually jamming with other musicians, singing classics with a big band, and fronting a cover band, before turning my focus towards songwriting. After many years of exploring the genres of jazz, blues, pop, R&B, and rock, I have found a sound that allows me to express myself in a way that feels true to who I am.

I’m based on the traditional, ancestral, and unceded territory of the Coast Salish peoples–-Squamish, Tsleil-Waututh & Musqueam First Nations, known as Vancouver Canada. I grew up in Calgary on the territories of the Blackfoot Confederacy (Siksika, Kainai, Piikani), the Tsuut’ina, the Îyâxe Nakoda Nations, the Métis Nation. I am of mixed heritage: Metis, Welsh, Irish, French and Scottish.

My lyrics are direct and honest. Conversational and vulnerable. And I’m pretty dramatic to be totally honest. A lot of my ideas start with a lyrical spark or melodic hook, the best is when they emerge together. Often it’s something I catch myself saying or thinking off the cuff, or something I hear someone else say. Or things I know we all think and feel, but are too afraid to say because someone might not like it. I write to take ownership of the truth, some people are about it and some aren’t. I reflect on the many lessons I have learned the hard way, the changes I’ve been through, and have found acceptance and healing in this music. That is what I want to share with my fans, that they can also find that for themselves.

I like to take risks with melodies and harmonies, test different possibilities, and bend the rules a bit. The best collaborators I’ve worked with have had the patience and faith to run with me on these ideas and build on them. While my sound is dominated by pop and r&b, the jazz influence from my past finds its way into the mix as well.

I love to build harmonies and weave different sounds together. I write with my voice a lot and often sing parts I want for instruments when I’m figuring them out. I envision my songs as scenes from movies, or montages. Then try to find what that picture would sound like, to create a sonic landscape to tell that story. This was a big part of collaborating with Van Ber, the producer of “Inside Thoughts,” it took a lot of communication. The way he was able to interpret these ideas and infuse them into the composition and production is pretty amazing. The final product came together as something real and unique and is something I am very thankful for and proud of.

My fiancé, who goes by Marzzybaby and I started recording at home last year when he got sick of seeing me wallow in self-pity hahah. It was a great way for us to stay productive and spend time together in a meaningful way. I’m really thankful for how he has supported me and my music, and he continuously amazes me with his drive and creativity. We wrote and demoed a lot of songs between summer and the end of 2020. We released two singles together, “Easy On Me” and “I Need You” while my album project was on hiatus, and have more in the vault for future release. At the end of last year, we embarked on the life-changing creative collaboration of creating a child together. We are expecting our baby at the end of this summer!

This is a tough question for a couple of reasons. Every song on my album, “Inside Thoughts,” is someone’s favourite, each one resonates with different people in different ways. They all show different sides of my perspective, sound, and artistry as well. That being said I would say listen to 86 Hope first. It’s the most unique title and expresses a turning point in the narrative of the album.

The Weeknd is one of my favourite artists, period. I love the creativity in the music and production style, and the honesty in his lyrics. Great vocal craft too. Jessie Reyez is another favourite. I love her fearless expression, and it’s really cool to watch her evolve as an artist. Other faves I have in heavy rotation are DVSN, Majid Jordan, Katraynada, and Daniel Caesar.

I also want to shout out some rising stars from the West Coast – Nimkish (who was one of the co-writers on my opening track, “Dive Deep”), Snotty Nose Rez Kids, Tissa Rahim, and Sade Awele.