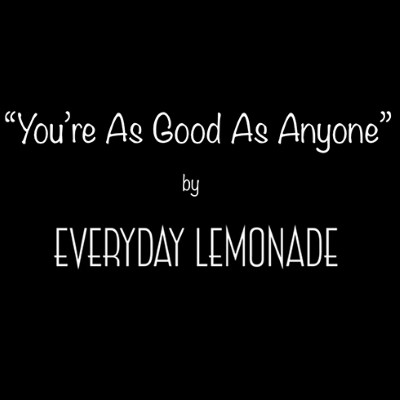 With the pandemic highlighting the importance of taking care of each other as much as ourselves, one man’s selfless effort to express gratitude to health care heroes has also inspired a group of top-class Canadian musicians. Calling themselves Everyday Lemonade, the all-star collective is honouring him with the new single, “You’re as Good as Anyone (Jordan’s Song)”.

It all starts with a 38-year-old autistic gentleman named Jordan Power. In Spring 2020, Power’s mom fell ill, and was hospitalized; she made a full recovery, thanks to the incredible healthcare workers who took great care of her.

With his mom on the mend, and his June 19th birthday approaching, Power’s wish was to supply lunch to the hospital workers to thank them. With the help of his friend Donnie Blais, owner of Toronto’s Rancho Relaxo restaurant, the wish came true, feeding 400 healthcare workers in one day from Blais’ food truck.

As much as Power and the healthcare workers he and Blais fed would have liked to share hugs, COVID restrictions made that impossible. But Power didn’t know for sure if the wonderful gesture he had orchestrated with Blais was good enough, and so…

Jordan Power’s birthday wish and act of gratitude has also given one very talented, aspiring singer something to be very grateful for. 23-year-old Deacon Wayne was working as a fry cook in a London, Ontario Arby’s, and posting YouTube videos featuring his exceptional vocal talents. While Kelly and Kramer were looking for the right singer to take on the lead vocals for “You’re as Good as Anyone,” Kelly happened upon Wayne’s YouTube videos and was suitably impressed.

“He has a four-octave range and no formal training,” says Kelly. “Ironically, the song was shopped to many famous singers for eight months…

“But (we) decided to go with Deacon because he is also ‘As Good As Anyone’.”

“This is a dream come true for myself,” Wayne says in a recent CityTV News report. “You know, you would never think that you would have this opportunity.”

In the same report, Kramer endorses choosing Wayne to sing.

“This young kid. He has the power. He really does,” Kramer says. “The range of emotion. The four octaves. I mean, he’s a complete unknown but I think, after this, he’s got a career.”

The music video for “You’re as Good as Anyone” features a heartwarming look back at Jordan’s lunch delivery to the health care workers, as well as 23 Canadian celebrities thanking Jordan personally — including Toronto Mayor John Tory, Lawrence Gowan, comedian Ron James and Goddo (Greg Godovitz). The video is also in memory of Patrick Kelly’s dear friend Paul Humphrey, lead singer for Blue Peter, who died during the making of the video.

Check out the video below, and find out more about Deacon Wayne and Everyday Lemonade in our mini-interview.

Yes absolutely, My name Is James Deacon A.K.A Deacon Wayne, I am 23 years old, from London, Ontario. I have been singing my entire life since I can remember and it has always been such a passion until I started High School and wanted to pursue it on the business side. I entered into numerous competitions, always taking home the highest possible honours! Trying to get recognized being from London has been a challenge, to say the least, With no formal vocal training and being told I have a 4 and a half octave range, I have wanted to share my gift with the world and with this amazing cause, I finally had that chance!

Tell us about the recording process behind “You’re As Good”?

This process has been invigorating, I was at Arby’s one day and now my new job is singing. Patrick Kelly discovered me on Youtube, I remember waking up one morning with a message from him stating what was going on. Then my life changed. The recording process was incredible, the entire process took 8 months, 6 different studios were used with musicians from 2 different countries. I happen to record my lead vocals at a studio in downtown Toronto. Having been discovered for such an amazing cause and finding out the company who I was going to be working alongside me was pretty darn cool. The process was truly mesmerizing and so rewarding to see how one man’s actions can move the world to create such an amazing story and to be the lead vocals on this song for this, was incredible!!

My highlight of 2020 personally was being able to continue working on my music career through a global pandemic. It was incredibly frustrating at times, with restrictions and closures, etc, but I, along with I’m sure so many others, pushed through and made the best of what we had for that year! I was so thankful to have the support system that I had, to be able to continue working on becoming a better musician and continuously strive to dedicate myself to my music.

There are many artists and industry greats that I would absolutely love to have the chance to sing with. However, my dream is to be able to sing with Elton John, Micheal Buble, Josh Groban and also do a duet with Celine Dion. These 4 have been idols to me, I have been so moved by them and I look up to them trying to pursue my career in the music industry. This would be a dream come true for me, to be able to share a stage with them and to share my gift with them and the world!