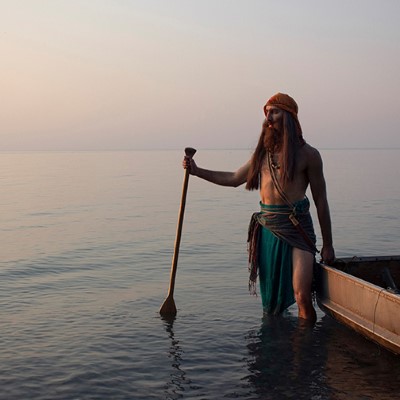 “the song was conceived when I was meditating in an urban woodlot off the Don Valley Parkway in Toronto,” BT explains — sharing that he began to cry with the release of processing his feelings. “I began singing to myself through my tears.”

For BT, the song revealed itself like a gift from the Universe.

“I found a talented producer to help me turn it into a gift that can be shared,” he shares. “The result is a cathartic baroque-pop ode to taking time for mental health, with a roguish lilt and notes of my Romani heritage.”

Clocking in at just over four minutes, “Decompress” works as a chant as it does a subtle reminder to simply “be.” The song plucks its way through tightly woven melodies, charming accordion, and mesmerizing harmonies. What Borrowed Thoughts has been able to produce is a track that finds its niche in folk-pop while daring you to slip it on while you’re looking for the right alternative rock song to explain exactly what’s going on inside your head.

“The song has been described by listeners as ‘a quarantine anthem’,” BT remarks. Other commentators have suggested “Decompress” is a “really sweet reminder to take time to love myself,” and it’s been described as “fun and whimsical, but then with this real sincerity and melancholy underneath.”

The song asks you to stop thinking but rather lean into what you’re feeling. And there are no wrong answers to the questions. Toss a rug on the floor. Light a candle. Inhale. Exhale. “Decompress.”

Check out the video for “Decompress” below, and find out more about Borrowed Thoughts via his mini-interview.

My name is Michael Masurkevitch. I live in my parents’ basement so I can work on acting, screenwriting, and music, I have a 15-year-old son who lives with us (upstairs), I am incredibly grateful (especially to my parents) to get to spend time on what I love, and I cry in the bathtub frequently.

Tell us about the recording process behind “Decompress”?

I was meditating in the woods and started crying with the release of it all, and singing to myself through my tears about how badly I had needed the time to decompress and destress, and the song was born. Julian Cassia – a great dude, my friend from film events who produces music and composes for films – helped me refine the tune and lyrics and then got started on the instruments. I did a web series called “Pirate Mike” and Julian still sees me as a bit of a Pirate, so he leaned into the swashbuckle feel, especially when he found out that I resonate strongly with my Romanian and (a little bit of never-discussed) Romani heritage, and it inspired him for the flavour of the song.  Then for the music video, we kept the team going and got together the original “Pirate Mike” team and costume, using clips from that and a feature I did a couple of years ago (“Beyond the Veil”) to create what we hope is a cathartic journey.

2020, wow… The pandemic wasn’t fun – but it led to having the mental-health time for more yoga, meditation, self-knowledge, and this song.  This song – and creating the music video to go with it – were definitely big highlights. I also got to wrap a feature film (horror-thriller) “Snow Blind” during the third winter of production – so after two winters running around filming in the winter snow, the third year we did the ending scenes with the prosthetics where my character runs around naked in the snow-covered in (fake) blood… I literally had to learn “Wim Hof” breathing, just to survive.

So I had a lot of fun creative experiences, but the biggest highlight was spending more time with my son, and also with my internal self, and getting to know this human that I have become.

Julian and I are working on two songs I’m really excited for – one is about cutting through the voices in my head to be present and in the moment and it’s earthy and raw, the other is a fun pop-tune designed to change the masculine-oriented approach we have to sexuality. I can’t wait for them to drop, and to film the (we hope) edgy and hilarious, respectively, music videos for them.  Pending the world’s response, I have a slew of other songs waiting on the deck.

My biggest desire – when I let go of all my fears and self-doubts and worries about someday making money from doing what I love and all that – my biggest desire is to bring people value with my songs, to make them think or feel differently because of the music.  So I’m hoping that’s what the next couple of songs – and Decompress too – will do.

In particular – and this would be amazing – we are hoping to get an artist like Brooke Candy, or God-Des and She, who are so ground breaking and epic, to be part of our provocative song (we haven’t asked them yet as we are working on producing it first, but that would be the dream!!!!)

Fever Ray and M83 are amazing, I’d be insanely excited to open for or be near them. But same with Lady Gaga, MGMT, Devon the Dude, London Grammar, Sol Seppy, Agnes Obel – and frankly dozens more, any of them would be amazing to work with.