Home / Interviews / BROS is back with their sophomore project Vol.2

BROS is back with their sophomore project Vol.2 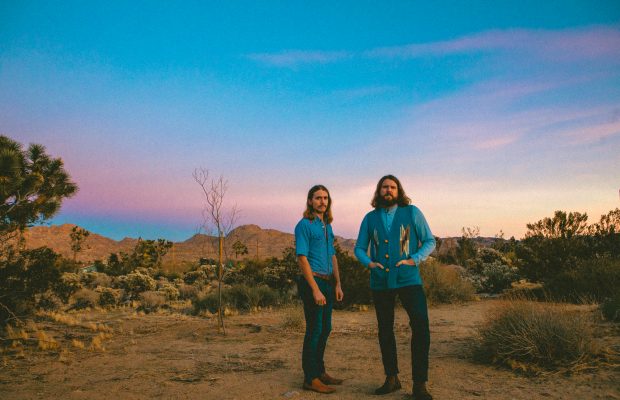 BROS, made up of brothers Ewan and Shamus Currie of the platinum-selling Canadian band The Sheepdogs, just released their sophomore record Vol. 2 out today via Dine Alone Records.

BROS blends a wide range of musical genres, from gospel, Tropicalia, and smooth jazz to funky, cop drama-inspired jams and vintage AM radio pop. They’re influenced by artists like Badfinger and Latin music legends such as Gilberto Gil and Os Mutantes.

The project features several accomplished musicians, such as their musician father Neil Currie on the piano, marking the first time they’d ever recorded together. The Sheepdogs’ guitarist is also included on some tracks to play only instruments he wouldn’t normally pick up, like fiddle and sitar.

Their song “Never Gonna Stop” was directed by highly sought after Justin Broadbent and Josh Raskin from Don’t Die who have created videos for Shad, Dragonette, Metric, and Corey Hart.

Their song “Tell Me” was adopted as the theme song for CBC Radio’s daily arts program ‘q’. To date, it has racked up a combined 11 million streams. Their music has also synced through ESPN US, SportsNet, Hockey Night in Canada, Toronto Blue Jays, and in-arena with the Denver Broncos, Minnesota Timberwolves, New Orleans Pelicans, Minnesota Wild, Colorado Avalanche, and Minnesota Twins.

Here’s what BROS had to say about their latest release:

Give us some background. How did BROS emerge from The Sheepdogs?

Shamus and I moved to Toronto in 2014, we had just finished recording a Sheepdogs record (Future Nostalgia), and Shamus started showing me some demos he’d been working on. They were really good, but kind of outside the Sheepdogs style of rock ’n’ roll. We had a few months off before we had to hit the road with the dogs again, so we started doing studio days and working on a new sound. It was initially more groove and pop melody-based. Eventually, it grew to kind of include any musical style we wanted to do, outside of straight-up rock.

What inspired you to feature your musician father on this record?

We needed some hot piano licks and our old man is a bit of a piano maestro. He was visiting us in Toronto for a weekend, so one morning we brought him with us to the studio and had him throw down. Outside of jamming at family BBQs when we were teenagers, it’s the first time we’ve really jammed with the old man.

How does this project differ from your previous releases?

It takes all the things Vol. 1 was and goes further. We get a little more far out with all the different instruments: trumpet, sax, trombone, tabla, shamisen, kazoo, etc. We tried to inject more humour and fun into things. We stole musical elements from the 40s and 80s, not just the 60s and 70s.

Your music spans across multiple genres. What would you say is the dominating genre for this record?

I guess we’re “pop”. That word probably makes people think of Lady Gaga or Bieber or something, but to us, it always meant the Beatles. They were the greatest pop musicians ever, and they never let genre boundaries get in the way of making music. They chased whatever sounds interested them, mashing up styles and textures. That is true freedom. To just follow whatever creative whim hits you. Playing in this band is so damn fun and satisfying.