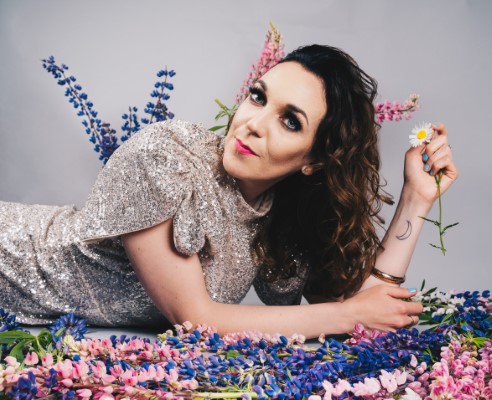 KINLEY is an award-winning songwriter, educator, and multi-instrumentalist from Charlottetown, PEI who has just released her newest single “We All Take Turns To Grow”.

This release will be the new theme song for the NuWelcom app’s video series, NuToc. NuWelcom is an app that sends notifications from government sources in PEI to your smartphone in 12 different languages. NuToc– Talks About Organizations in your Community–  highlights leaders from organizations all across PEI.

NuWelcom also invites everyone to attend the song release party and BIPOC USHR fundraiser on Sunday, July 11 from 4-8 PM at the HopYard in Charlottetown. There will be a full lineup of delicious food and beverages and admission is free.

“I really love the NuWelcom app! I use it all the time! I love the idea of bringing the community together and helping each other. The fine folks at NuWelcom were looking for a song to be about the exchange of energy that happens when we come together as a community. This is such a beautiful image to me.”

“We All Take Turns To Grow” is produced and engineered by Colin Buchanan and co-written by KINLEY and Bahamian rap artist Xale (Alex Ferguson). Xale moved to PEI from the Bahamas a few years ago and his verse explores his experience transitioning from the pink sand shores of the Bahamas to the white sand shores of PEI. Also featured on the track is world-class performer Tiffany Liu on the traditional Chinese pipa, and Aaron Comeau on guitar and keyboard.

“This project was one of the coolest things I have ever been part of. I know that this app will grow and expand into many other cities and towns and I’m so happy to be even a small part of it. The collaboration with the other musicians on this song has been so fun. I’m definitely going to work with all of these musicians again and have them featured on my next album.”

KINLEY is also in the process of writing songs for her next full-length album, with plans to record this winter and release next year. She also posts weekly online violin lesson videos on her website (and app) called Violin with KINLEY.