The Sheepdogs release new video “Keep on Loving You” 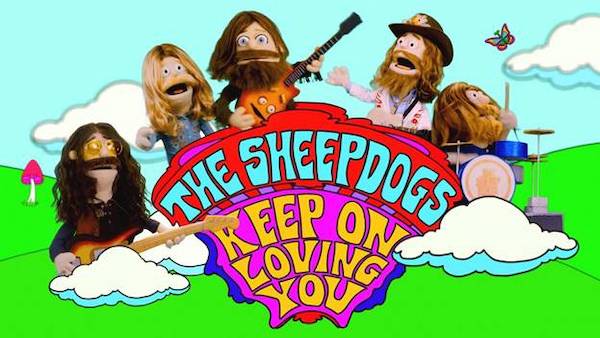 Beloved band of rugged rockers, The Sheepdogs have released the official video for their hit single “Keep on Loving You” last week.  Co-directed by bassist Ryan Gullen and Mat Dunlap, the video sees the group portrayed as puppets in the timeless tale of the enduring love between a rock star and his guitar.  The puppets were created by LA-based puppeteer Jess McKay (Crank Yankers, Jim Carrey’s Kidding), with illustrations created by Dawn Aquarius, all of which match the band’s throwback aesthetic perfectly.

Of the video, Ryan says:

“Both Mat and I love puppets and have always wanted to do something with puppets for a video. The idea for the video stemmed from a conversation around how we wanted to make a video non-binary love story and the idea evolved from there to be a love story between Ewan and his guitar (who we named Leslie – as in Leslie Paul).  It was amazing to watch all the band members come to life in puppet form. The song is about not realizing how much you love something until you almost lose it and fighting to get it back. I think that’s something that is universal and not gender-specific, and something that everyone can identify with. We wanted to convey that feeling in the video and hope everyone enjoys watching it as much as we enjoyed making it.”

In addition to releasing their new EP No Simple Thing, The Sheepdogs are returning to the stage as local regulations begin to allow it.  In Canada, the band will be performing at KRUGOFEST this weekend, with performances at the Calgary Stampede and Edmonton’s Together Again Festival coming up.  Check thesheepdogs.com for all upcoming tour dates.

Hailing from Saskatoon, The Sheepdogs are one of Canada’s most successful bands amassing a legion of fans worldwide with their rich harmonies, rounded guitar tones and classic rock influenced sound. All told, the band have scored ten Top 20’s, with seven of those Top 5’s and three single taking the #1 spot on Canadian Rock radio including, “Hole Where My Heart Should Be” from their 2018 studio LP Changing Colours. Hit singles “I Don’t Know” and “Feeling Good” both reached Platinum certification, with “The Way It Is” achieving Gold sales. Additionally, the albums Learn & Burn and The Sheepdogs both achieved Platinum status and to date the band has been nominated for 10 JUNO awards, winning four of the coveted trophies including Breakthrough Group (2012) and Rock Album of the Year. The Sheepdogs have notably received Rock Album of the Year nominations for all four of their last studio albums. The band were the first to be selected as the Record Store Day Canada Ambassadors in 2018 and have sold out shows from coast to coast and around the world.