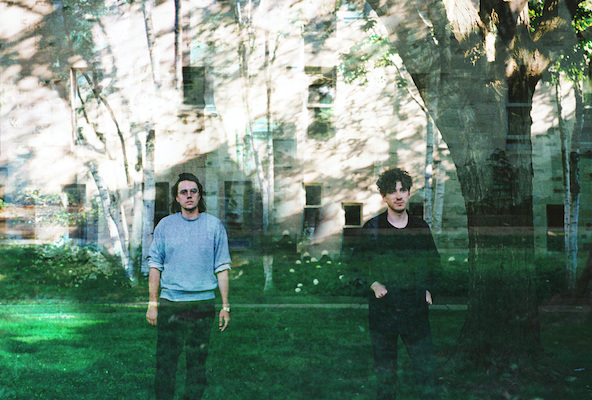 McGreevy and Lewis met at a Dilly Dally show and immediately connected over a resolute love of underrated indie-pop a la Sarah Records. The pair started writing and recording together in 2018, taking the time to discover their musical identity: a whole EP was recorded with outside producers and scrapped, never to be released. “It came out sounding good,” Tom explains, “But not like us.” Their critically acclaimed debut EP, Get Bleak, released on Madrid indie Bobo Integral and re-released on Carpark Records in 2021, revealed the key to Ducks Ltd.’s sound: simple charms, just like the music that inspired it, and a project best served when it’s just the two of them trusting the intensity of their creative relationship. Their debut LP, Modern Fiction, and its masterful melodies and depressive fun confirm it: great things are here, and sometimes, all you need is a good friend to realize it.

Writing Modern Fiction was intimate and collaborative. McGreevy would draft a song’s nucleus on an unplugged electric guitar before bringing it over to Lewis’ apartment. There the pair sat, placing percussive drum machine beats under nascent melodies, passing a bass back and forth, and adding organs and bridges where necessary. In addition to finishing touches by producer James Cecil (The Goon Sax, Architecture in Helsinki), Carpark labelmates The Beths provided backing harmonies on three of the album’s tracks.

On lead single “18 Cigarettes,” Eliza Neimi hops on to play cello. The track was loosely inspired by a 1997 Oasis performance of “Don’t Go Away.” “The thing I came to love about the song after watching that performance over and over again is that it’s a song that kind of tells on itself,” says McGreevy. “It’s a really raw emotional expression from someone whose capacity to talk about their feelings is stunted and they’re cut up about it. ‘18 Cigarettes’ is kind of an attempt to do a different version of what that song does.” The video, directed by Ali Vanderkruyk, features McGreevy running around Toronto.