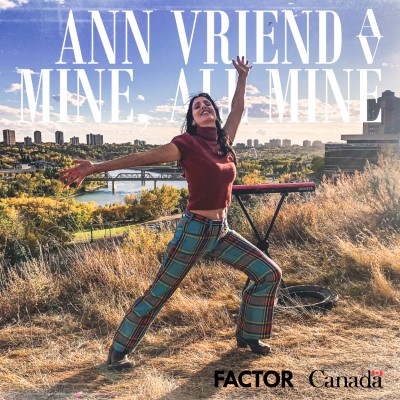 Well known for her dedication to social issues, Alberta-based singer-songwriter AV has just released “Mine, All Mine”, a song about coming to terms with the concept of hoarding, capitalism and how it’s normalized in our society, “Mine, All Mine” has an uplifting, catchy, retro sound, with lyrics that express the hard truths we must face as a society.

Ann has also announced the return of her community-based “Porch Concerts” series – a socially distanced, weekly community event located in her neighbourhood of McCauley that all are welcome to. Ann’s Porch Concerts quickly gained attention last summer and have been attended by people from all over the city, media, and local MP’s. They are partially hosted by McCauley residents who take pride in bringing the community and those outside of it together. Join AV and friends every Sunday at 2:00 pm.

Written over 3 years ago and now more relevant than ever, AV’s “Mine, All Mine” has a Doo-Wop, Motown style, cheery melody that is almost in direct opposition of its lyrics. While on the one hand, it is an old-school, sweet, nostalgic song you can’t help but tap your feet to “Mine, All Mine” is also an inward-looking critique of a society so possessed by materialism it justifies a large path of destruction, colonial and otherwise.

AV is a resident of McCauley, Edmonton, which is an inner city neighbourhood on Treaty Six land referred to in the local media as a “ghetto,” where a disproportionately large percentage of residents compared to the rest of the city suffer acute trauma, mental illness, homelessness, and/or severe addiction— and the rest of the more stable families living in and amongst this— mostly newcomers to Canada— try to cope with this as best they can. The opioid crisis has contributed to far more lives lost in McCauley than to the pandemic, and drug houses, the sex trade, gangs, and other crimes are rampant. Therefore AV’s daily life in McCauley constantly reveals the inequities of human standards such as basic safety that she and her neighbours face, all in the looming shadows of Edmonton’s shiny downtown business sector.

This volatile environment has led to AV’s examination of a society that worships and rewards affluence to the point of creating more and more victims as it cares so little for health compared to wealth. The lyrics of “Mine, All Mine” remind us how as children we are taught one thing: to share, be inclusive, helpful, and respectful— while in reality, our economy and stock market — and colonial past and present — encourages and rewards the exact opposite.

“Mine, All Mine” emphasizes the possessiveness of what’s normalized.

“We teach our kids to share their toys and be nice to people, but the way we have to operate in the economy is to do well seems to be the exact opposite. So much doesn’t line up.”

AV is known most for her virtuosic, soaringly powerful vocals, and not far behind that for her multi-award-winning abilities as a songwriter. She has been delivering her undeniably unique brand of old-school, inner-city soul to audiences around Europe, Oceana, Asia, and North America throughout her under-the-radar but a consistently award-winning, critically acclaimed career. AV has played some of the world’s most coveted music festivals, including SXSW and Reeperbahn, along with having her music featured in Elle Magazine and on numerous television shows. AV has also twice been the recipient of the “Cobalt Music Prize” at the Maple Blues Awards and has also taken home the “R&B/Soul Recording of the Year” Award at the Edmonton Music Awards.