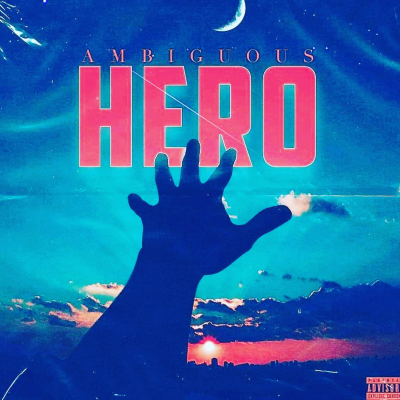 Originally from Nova Scotia, now based in Alberta,  hip-hop artist, Ambiguous, aka Troy Taylor is no stranger to the music scene but has been away for six years. Today, we have teamed up with him to unveil his first single in six years, “Hero”.

He shares on the single,

“The song concept is about simply being a friend to a friend in need. The song lyrics touch on the idea of a man’s experience of societal expectation to always be strong, not feel pain and move forward. To be like a HERO. At the same time, I offer my shared experience and support to the men in the world feeling lost and sometimes weak. I am offering my support as a HERO to them. I am letting them know, it will be ok.”

As for the video,

“The video is slightly different than the song lyrics although it remains congruent. This one goes out to the loving fathers who have been kept away from their children by a toxic and self-serving ex with the help of a greedy and manipulative family court business. (I emphasize LOVING father, as it is my experience that this topic sometimes elicits response regarding Dads that are not good for children. I stand by the protection of children first and do not support abusive mothers or fathers having legal custody of children.) It showcases the hurt of parental alienation from  father’s standpoint. It touches on the bias family law that perpetuated the broken home for monetary gain. The song is dedicated to all of those effected by missing out on a loved one’s life.”

Check out the video below, and find out more about Ambiguous via our Five Questions With segment.

It’s Troy aka Ambiguous!! Proud Canadian underground M.C! I’ve been disconnected from the scene for the last 6 years but have been a part of the hip-hop scene for a very long time. Literally, Classified got me on stage before he was famous and touring high schools, so, do that math haha. I’ve worked with TONS of Canadian talent and love it! Alberta born, east coast raised ( NS, Valley stand up), currently residing in Edmonton. I’ve got a series of singles and videos dropping over the next few months. My first single in over 6 years, “HERO”, has dropped!! Check it out!

People have called my hip hop uplifting and positive but I call it real in content. It is absolutely meant to lift the spirits of my listeners.

My first EP dropped in 2008. My last album DEVOTION was in 2015 and was my dopest project to date. I grew a lot and had to raise my lyrical ability as an artist with that project because I was collaborating with Canadian legends like Choclair, Saukrates, Moka Only, Touch, and Killah Priest (not Canadian but with Wu-Tang Collective) over beats by Classified, RichKidd, Saukrates and one of my fav Canadian underground producers Loophole and Prosper.

My writing style is diversified. I love free association but sometimes I need to vent in a record. I like experimenting with song structure and vocal delivery. Fast, punchy lyrics with slight melodic cadence, there’s always some sort of take home from my songs but my overall goal is to be better than I was the day before. Grow!! Learn from others and love the music.

I can rhyme fast, but I prefer my listeners to hear my words, process my metaphors and understand my message.

I’ve needed to be creative in order to survive.

I’ve been studying in university, finishing my sociology and psychology degrees. Exercising and meditating a lot. Studying Jiu Jitsu and raising my 2 young daughters.

I’ve learned to video edit and have been writing and preparing upcoming music for all ya’ll as well. Music, creativity, and expression are what keep me going. It keeps me healthy.

Well, you should check out my upcoming single “Hero” produced by Prosper. It is a tribute to the brothers who are always held to societal standard of being “invincible”.

But if I were to choose an EXISTING joint, I’d say check out “Unstoppable” on Spotify. Find it by searching AMBIGUOUS- DEVOTION.

I don’t have a favorite right now. I tend to watch and listen to the up and comers or best kept secrets of different genres. I am watching Mustafa, and Krystle Dos Santos is dope too. Shout out Tissa Rahim too. I had Mourain on my first album, so I am still checking his moves too. Good artist. You know I’m still blasting the classics too though. The Tragically Hip, D-Sisive, even the Weekend. If the music is good, it’s good. And Canadian music is the dopest! S/ O to Canadian Beats. It’s been a pleasure!