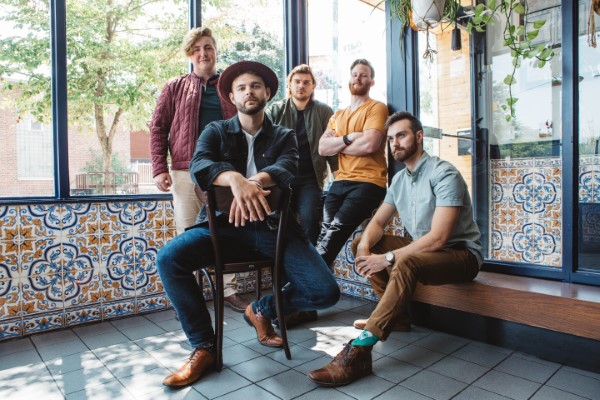 “There’s a common phrase – don’t let someone live rent-free in your head. Well, I have a bad habit of getting caught arguing with imaginary people in my head, something that only gets worse the longer I spend stuck home alone. When it’s 3am, and you can’t turn your brain off… well, I think we’ve all been there at one time or another.”

“Beeswax” was recorded at The Bathouse Studios near Kingston, ON, and produced and mixed virtually in Scotland by Tony Doogan (Wintersleep, Hey Rosetta!, Belle & Sebastian).

Long Range Hustle is a five-piece indie rock outfit made up of Paul Brogee (co-lead vocals, guitars, violin), Jay Foster (co-lead vocals, keys, synths), AJ Fisico (drums, vocals), Mike Brogee (bass, vocals) and Ryan Pritchard (guitars) grew up in the woods of small-town Ontario. You could have found them playing handfuls of musical instruments, singing in community choirs, practicing slapshots and blocking hockey pucks, running summer camps, and ultimately performing Long Range Hustle shows throughout high school. College and university flew by as they spent every weekend performing shows and writing music in basement studios. The band’s hard work over the past few years has paid off with cross-Canadian headline tours, shows in the US, and support slots with The Glorious Sons, Matt Mays, and Arkells. You might have heard them on CBC and campus radio stations, or found them on your favorite Spotify or YouTube playlists.

No matter what roadblocks try to come in front of Long Range Hustle, they put their hands together, shout “1-2-3 Friends!” and drive themselves forward – always determined to leave you with that bright spark to tuck away in your pocket for when you need it on a rainy day.