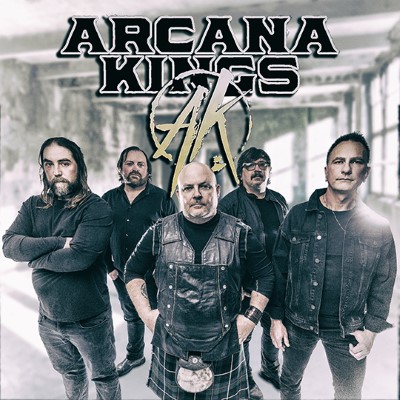 “Here We Go” is the lead single from the Nelson, BC, Regina, SK, Saskatoon, SK-based quintet’s brand new album Lions as Ravens, which was released in June via Brandy Records Canada/ MC1 Nashville.

It energetically showcases a band fired up and ready to play hard as we begin to emerge from our long, lonely pandemic winter and Canada opens up, smiles wide and gets ready to rock again.

Prior to its official release, “Here We Go” has already become a universal sports anthem with CFL, NHL and pro basketball teams across North America. The Saskatchewan Roughriders have adopted it as their rev up, team run-out song during home games and the Winnipeg Jets and the Saskatoon Rush also use it to pump up their crowds. Arcana Kings were also honoured to perform “Here We Go” live at halftime during the CFL’s western semi-final playoff game at Mosaic Stadium in Regina, Saskatchewan. Kicking off with the double rallying cry of “Here we go! Here we go!”, the chorus is guaranteed to have entire arenas ready to shout it out and ride along whether they’re in the house for the big concert or the big game.

After performing across Canada and internationally in the U.S., Japan, Taiwan and Sweden, the rush of putting it all out there on stage — or on the playing field, if you will — is what inspired Arcana Kings’ lead vocalist, rhythm guitarist and bagpiper Johnny McCuaig, to write “Here We Go.”

“I wanted to capture the feeling of those nights when we were getting ready to hit the stage and getting ourselves pumped up for the ‘Big Show’ or the ‘Big Night Out,’” McCuaig explains. “Every time I hear it, it still gets me pumped up and I get a little excited.”

The music video for “Here We Go” also has that “big show” vibe as it debuted at Regina’s IMAX Theatre and showcased at Saskatchewan’s renowned Yorkton Film Festival. Thematically, the band wanted the video to capture the intensity of competitive sports like football, hockey, or basketball but knew that budget limitations wouldn’t let them draw those connections visually. However, happenstance enabled the band to capture the idea in a more unique but no less intensely competitive way.

“It just so happened that there was an advertisement in the local paper for a women’s roller derby bout,” recalls McCuaig. “We brought the idea to our director Dave Benedict (from the band Default) and within a day we had the concept, the contacts and the direction. It all just came together like it was meant to be.”

Watch the video below, and find out more about Arcana Kings via our mini-interview.

Sure thing. My name is Johnny McCuaig and I am the lead singer, rhythm guitar player, and bagpiper of Arcana Kings. The five of us (Kevin Kyle bass, James Picton lead guitar, Allan Morrison rhythm guitar and vocals, and Martin Zinger drums) all come from different backgrounds. We chose the name Arcana Kings because of the lure. Arcana meaning secrets or mysteries, ties into our interests of things like ufo’s, ghosts, angels, and cryptid creatures. We like to keep our minds open and see where this journey takes us. We love the question “What if”?. Why not look into other possibilities? lol. But honestly, we are pretty down to earth guys. I was raised in a small town in the Kootenays, Nelson British Columbia, where I learned to play the bagpipes with the Nelson Kootenay Kiltie Pipe Band. In those days, after we would lead a parade or do a special event, the pipe band would end up at the local legion. I was too young to join them but I was allowed in as a performer. So they would put me on the tables and I would continue to play while the rest of the group would have a wee dram or two. This was where I was comfortable, performing for people and watching them have a good time.

Tell us about the recording process behind “Here We Go”?

It happened in a few stages. I wrote “Here We Go” at my home studio in Nelson. I wanted to capture the feeling of what it was like to get pumped up before our shows, or the feeling you get when you are getting ready to go to that big event that you are so excited for. When I write a tune for the band I always send it out to the guys and have them go over it. I like getting their opinions even if I don’t always agree with them. It keeps me honest and pushes me to keep an open mind. After the guys tinker and help with the arrangements we know it’s time to hit the studio. I’d like to say we lucked out working with Producer and Engineer Ryan Andersen of the Recording Arts Institute of Saskatoon. Ryan really made the recording process fun and easy. He is a very laid back guy and knows when something needs to shine. He let us do our thing and added his magic afterward. It was a real eye-opener for us and we learned a lot about his process and what we are capable of. Ryan has become one of the guys with Arcana Kings. We would go into the studio ready and prepared to record 3 songs in 3 days. Set up and get drum sounds on Friday’s, then on Sunday’s we would be adding the finishing touches.

We were lucky to do a string of shows right before covid shut everything down. I remember playing our last show for the Saskatchewan Arts Council in a small town called Indian Head Saskatchewan. The venue was a small movie theatre made into a live venue. such a cool theatre. You never know what to expect doing those shows. But let me tell you something, wow!!! those guys come out to party!!. One of my favorite shows of 2020 by far!.

Having the time to write, do some social media, and come up with different ways to keep active was also fun in its own way. I still don’t know what to make of 2020. lol.

Getting back out there and continuing all of the momentum that we had before Covid hit. We were making big plans and were starting to really tear it up!. 2021 has already seen us sign distribution with Brandy Records who we are very excited to work with. We want to keep adding to our team and surround ourselves with people who believe in what we are about and what we do. We have already started writing our next album and there are no signs of slowing us down. We are ready to take the world by storm! HERE WE GO!

Absolutely!! Bucket list would have to be Foo Fighters. I think Dave Grohl and his crew seem like fun guys. I love the music and the vibe is a good fit for what we do. What a concert that would be. ACDC is always on the list. Are you kidding me? Yes Please!! Imagine getting to rock out with Angus. As if none of us have ever pretended to be Angus. I would love to have a drink with that guy. I wish we could have met Eddie Van Halen. That one stings the most. Eddie’s playing and songwriting were very influential to me. His stuff got me through some tough times. Even though we don’t know any of these guys, it kinda feels like we do. Funny hey?