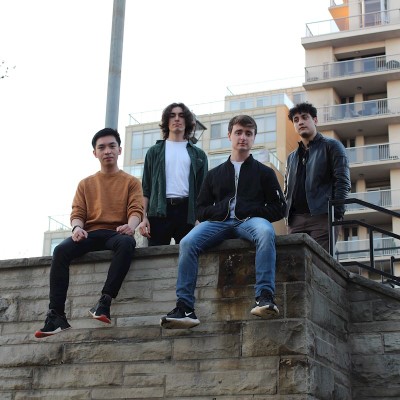 Burlington, ON-based alternative rock/ pop-punk band, Full Deck has released their latest single, “Limbic”, which is an ode to the human control centre responsible for this self-indulgent behaviour.

Beginning with a jumpy alternative indie-rock hook, “Limbic” takes the listener on a journey where someone feels confused and possessed by their own limbic system. It sounds strange, but this sort of behaviour happens to people every day.

The limbic system has the power to put a person into an almost fugue state, having them do something they are unaware of at the moment. Ever walked down a path and realize “wait, where am I, why did I go this way?” That’s the limbic system.

Throughout the song, the instruments almost take the shape of the limbic system: the bass and drums as the amygdala (emotional memory) the rhythm guitar, and vocals as the hippocampus (new memory and learning), and the lead guitar as the dopamine released by the brain’s neurons.

Full Deck keeps the pleasure-seeking actions in the song experiences just vague enough for the track to feel relatable. After moments of reflection (the chorus), the character realizes “I’ve been doing things I know I shouldn’t do.” There’s an unnerving sensation throughout the whole track, especially since the limbic system always wins in the end.

“Limbic” is the second song that’s been released from the band’s You Know It’s Real EP, which dropped this past April.

Check out “Limbic” below, and find out more about Full Deck via our Five Questions With segment.

Our music is heavily influenced by bands such as Nirvana, Green Day, and Muse. However, we also enjoy and draw from funk, ska, indie, and classic rock. Our songs typically start off from a cool riff/chord progressions idea where then lyrics are written to accompany the mood of the song. However, sometimes our songs also start from a lyric idea, cool drum beat, or interesting bass line.

At the start of the pandemic, we really hunkered down and decided to record as much as possible which resulted in our new EP “You Know It’s Real.” This year, however, we have been more focused on our online presence and taking advantage of some of the online tools that allow bands to connect to their fans during lockdown such as live-streaming band practices, concerts, and even hosting Livestream hangouts where we just chat with our fanbase and conduct in-depth analyses of our songs.

Our song Limbic would definitely be our go-to song for recommendation to a new listener. It has quickly become a fan favourite and continues to bring us new fans and opportunities.

There are so many! We love The Dirty Nil, the Arkells, PUP, The Beaches, Said the Whale, Hollerado, City and Colour, and Tokyo Police Club. We also enjoy and appreciate the classics such as Rush, The Tragically Hip, Sam Roberts Band, Sum 41, and Sloan. The new Kiwi jr. album, as well as the new Pottery album, are also really cool!