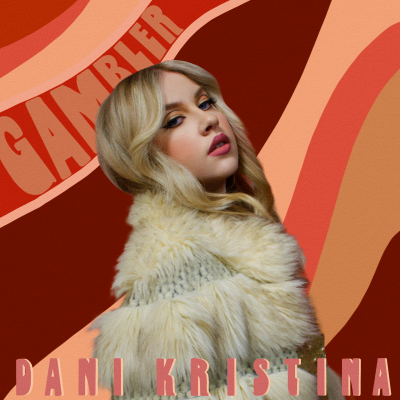 Award-winning artist Dani Kristina released her hot new disco-pop single “Gambler” and the official music video featuring TikTok star @katamogz. “Gambler” is an energetic disco-pop song inspired by the vintage synths of various influences, telling the story of a failed relationship when one person is more invested than the other. Produced by Grammy-nominee Trevor James Anderson and written by Dani Kristina, the new single is an energetic disco-pop track that sonically resembles Dua Lipa or the “new” Miley Cyrus.

“Gambler” is an energetic disco-pop song inspired by the vintage synths of various influences, telling the story of a failed relationship when one person is more invested than the other. With the help of cinematographer Paul Persic, Dani self-directed the music video featuring TikTok star @katamogz (En Flique Creative), this song explores the risks of being “all in” to somebody without being aware of the risks.

Following the successful release of her debut EP “Aura”, Mississauga Music’s Best New Solo Artist, and Dropout Entertainment’s winner of the Best Pop Video of 2020, Dani Kristina has established her sound as an up and coming pop artist.

Here’s what Dani had to say about her latest release!

Where did the concept for the title “Gambler” come from? Did you know the title of the song before you wrote it?

The concept for the title “Gambler” came to me as I was evaluating my own personal experiences and the idea of love in general. I began writing the song without even considering an overarching theme because I was using it as an outlet for my feelings. The song’s first verses were written as I looked back on past memories and even reading them now, they center around many nostalgic romantic feelings for me. Initially, it was the idea of making risky choices and investing time and effort into another person that made me draw the parallel between love and gambling, which eventually led me to build the song’s thematic content around this idea. As I looked back at the memories I was documenting in this song, I noticed that they were fuelled by risky choices and love lost, which was fitting to this parallel. After the song was written, “Gambler” felt like an appropriate title. Just like in love, gambling can often cause people to second guess their choices as they deal with the consequences of bold decisions and high stakes.

What was the inspiration for featuring a TikTok star?

When I was coming up with the mood board for this music video, I knew I wanted to represent a concept of duality throughout; where one can sometimes win, but also sometimes lose. Knowing this, I knew I would need to start looking for someone to play in this secondary lead role, and I immediately thought of Katarina Mogus. I wanted to cast someone who has similar features to me to showcase two versions of myself in the video, one that wins, and one that is not so lucky. I’ve known Katarina for quite some time, and I knew that she would be a great fit. She has a great on-camera presence, and she is such a pleasure to work with, so I reached out to her about the project, and we got started on creating the video!

How did you come up with the vision for your music video?

The vision for the music video was born during the initial writing process of the song. When I write music, I’m often picturing a scene in my head that guides the lyrics, and for “Gambler” I was visualizing a vintage casino. Building upon that, when the song was finished, I referenced my lyrics to use them as a guide for the video’s action. I used a mood board to help me create a convincing casino atmosphere, but the meaning of each character’s role and the storyline for the video was created to really emphasize this parallel between gambling and relationships. This eventually led me to use the concept of a dealer to represent a love interest, one who is literally holding the cards that decide your fate. Using all these metaphors, and even explicitly showing the main character in the video lose it all, I wanted to create a double interpretation of the song; one where a girl loses her money to the casino, and another where she risks it all to break her own heart.

What else can fans expect from you this year?

I have a lot of new music coming out this year that I’m so excited to share! I’ll be building upon some themes of love lost explored in “Gambler”, letting the story of this risky relationship continue through the narrative of my newer songs. Once these songs are released, I hope my fans will be able to notice the broader narrative being told throughout various songs.