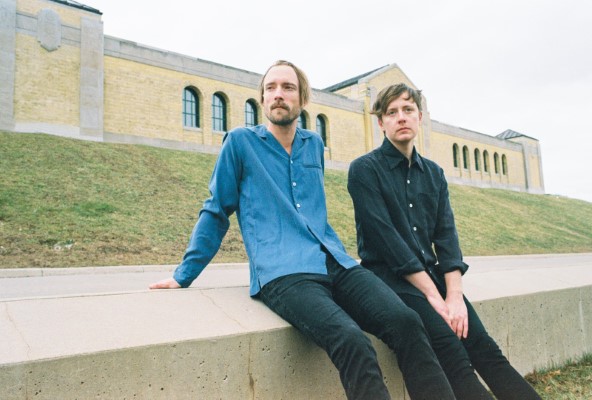 Summersets (the new duo from Kalle Mattson and Andrew Sowka) have shared another new track from their upcoming EP, small Town Sunday, “pass me by.”

“pass me by”, which saw its radio premiere this past weekend on the Strombo Show, is about “the two characters we’ve been writing about in all of our songs,” says Mattson. “Set early in the timeline of their relationship it’s about feeling a little lost or aimless but that all could change after meeting this new person. Musically, I’ve wanted to write a song like this for as long as I could remember. Tom Petty has always been a massive influence and I’ve always strived to write as terse and hopeful as he does.”

For the video, Mattson and Sowka stumbled upon a bunch of found footage of their hometown, Sault Ste. Marie, from the 60s and 70s.

“We wanted the video to feel like a collage of where we’re from and also where the story we’re telling is set,” says Mattson. “The steel plant, the bridge to Michigan, the Greyhounds. It all feels incredibly nostalgic to us.”

small town sunday is a companion EP to their debut, small town saturday.

“We recorded in the same studio, reunited with all the same collaborators, and wrote about the same characters,” says Mattson. “When we started Summersets almost a year and a half ago it came from a very natural place for Andrew and I. We were inspired by a lot of the same music from the late 60s to early 70s and I was writing all these songs that weren’t autobiographical for the first time.”

“Once I wrote “never love another”, which was on Small Town Saturday, I had the blueprint of the story I wanted to tell across our songs,” continues Mattson. “The story of a relationship from the moment two people meet until one of them passes away.” Small Town Sunday adds to that story with new narratives for each of the two characters from the relationship’s beginnings in “reciters” and “pass me by”, to the breakup and car crash in “afterthought” and “only you”, and finally the goodbye of “every tomorrow”.

The 30-year-old Mattson first gained public attention by writing the Polaris Music Prize-nominated 2014 album Someday, The Moon Will Be Gold, that dealt with the death of his mother who passed away when he was 16 years old. It was during the recording and touring of that album that Mattson and Sowka began their longtime musical collaboration that eventually led them to form Summersets in 2020.

“Starting a new project that coincided with a global pandemic wasn’t exactly how we planned for this to go, but writing and recording about these fictional characters in the midst of so much uncertainty has brought us a lot of comfort and escapism,” says Mattson.