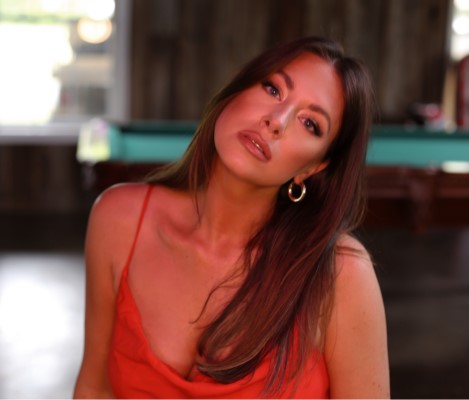 Vanessa Marie Carter is finding her authentic sound and showcasing it to the world. The Vancouver-born turned Nashville-based country singer is debuting her new single “Yours to Lose”.

Her new track comes on the heels of her 2020 release “Broke Your Own” which has already earned nearly 300 thousand digital streams on Spotify.

We caught up with Carter to learn about her big move to Nashville, her songwriting process, and what it really means to find your authentic sound.

What was the initial transition from Vancouver to Nashville like? Did you have any expectations or nerves making the move?

I actually made the move from Oakville to Nashville around 7 years ago and have been here on and off ever since! I think when you move here you can either look at all of the talent and feel really inspired by it or really intimidated.  Luckily, I’ve always found it inspiring – I still do!

You’ve already opened for so many big-name country acts so far in your career. Is there anything special you’ve learned from watching them perform that you’ve been able to incorporate into your own performances?

I try to learn little things from every live performance I watch.  But I think the best lessons I ever learnt were actually from playing in bars for years! There’s not much you can’t handle when you’ve done that for years.

What’s been the biggest lesson you’ve learned as an independent artist?

To trust my gut! There are so many times you can let your head get in the way and overthink things.  But at the end of the day, you’ve got to just trust yourself and go with your gut.

You’ve talked about writing “Yours to Lose” and how it originated from a conversation with a close friend. Can you tell us more about how those conversations shape the way you write songs? Do you make notes at the moment or is it something that comes up as inspiration later on?

I have a little note file on my phone that I’m constantly jotting ideas down on. If I’m in a conversation and someone says something, If I hear something cool in a movie… inspiration comes from everywhere!

Country music is of course known for its real storytelling and we definitely hear that in songs like “Yours to Lose” and “Heart of a Woman”? Is that what drew you to the genre, that kind of songwriting?

I love the storytelling aspect of Country music. I think it’s really special and unique to the genre as well. I think especially as a songwriter, it’s a really interesting exercise. Whatever you write has to make total sense. And that might sound obvious… but it’s kind of like, you have to be able to read the story front to back and have it all be cohesive. Whereas in pop music sometimes you hear things and you’re like I don’t get that…? That rarely happens in country music, and I think that’s a real art!

What are you most looking forward to as you continue to build your career? Are there any major goals you’ve set for yourself? Or are you living in the moment and just enjoying releasing new music?

I definitely try to live in the moment! But I’m also always planning for the next thing and the next big move. Right now, I’m so looking forward to getting back on stage. That was the toughest part of the pandemic for me for sure!

What does finding your authentic sound mean to you as an artist?

It’s been a real journey! I think honestly, it just takes time. I think it’s super important that as a young artist, you don’t try to rush that. My first few records will always be really special to me, but my style has definitely evolved, and I’m happy for that :).