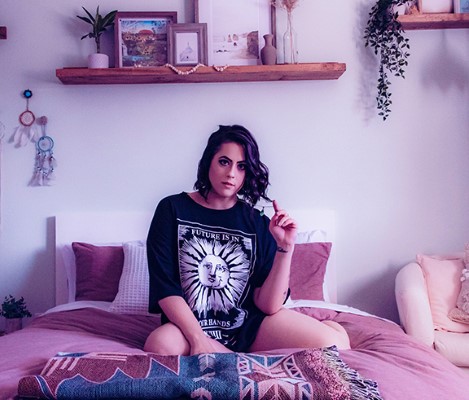 Chart-topping and award-nominated Canadian country artist Bree Taylor has unveiled her new single, “Kryptonite”, along with a music video to accompany the release.

Recently nominated for a 2021 Mississauga Arts Award (MARTY) in the Music: Solo Vocalist — Emerging category, the Ontario-based singer/songwriter has been churning out classic country tracks for the better part of the past two years.

With “Kryptonite,” she’s granting an all-access pass to fans with this contagiously upbeat, diary-reading track about a love that’s so wrong, it feels so incredibly right.

Taylor unleashes a hellstorm on a partner who might have been, could have been, had been, but ultimately shouldn’t have been.

And we’ve each been there; from flirting with danger to running directly into the fire, many of us know all too well the perilous doom that awaits us when we exchange love for lust. But doesn’t it just feel too damn good to leave well enough alone? Taylor unashamedly lets that careless whisper do all the talking on this rambunctious, roller coaster ride of intimate desire of knowing better, but disregarding the consequences anyway.

“You might be the devil in disguise,” Taylor affirms, packing heat on her next punch: “Fill up my head with your sweet lies, can’t tell what’s wrong it feels so right.” Written by Taylor and frequent collaborators Donny Anderson and Murray Daigle, the song refuses to veer off the path of authenticity, honesty, and real, pure emotional highs and lows.

Check out the video for “Kryptonite” below, and find out more about Bree via our mini-interview.

HI! I’m Bree! I am obsessed with purple and anything that sparkles! I am a pop-country singer-songwriter from Mississauga, Ontario and I am definitely not your typical country girl but I feel that is what makes what I bring to the table as an artist different and relatable. I am probably the only country girl with a lip piercing that you’ll find LOL. I am unapologetically myself and have no intentions of changing who I am for anyone. I love that I am able to bring something different to my sound in country music through dabbling with pop and rock elements because I grew up listening to literally every genre of music and love that country music has embraced this. Ultimately, I want listeners to love the vibe of a song, sing-a-long and to connect with my music on an emotional level. Music has always been an escape for me since I was a kid whether it was listening to other talented artists/bands or writing my own music as a creative outlet for my emotions but being an artist has always felt like my purpose on this earth and I love every single minute of it!

Tell us about the recording process behind the video for “Kryptonite”?

The process of creating the music video was truly incredible and so cool and different from anything I have ever done before. We collaborated on different ideas for the video and settled on the vision you see today. We filmed everything in two days – one day was filming myself and the dancers on a green screen and one day was filming the short intro/outro that makes the whole video have a mini-movie vibe that holds the Kryptonite dream world together. The hardest parts were on my videographer, Alex Gayoso, who had to digitally create the entire Kryptonite world that we envisioned from scratch and bring it all to life. He then placed us IN that world (myself and the dancers) and basically filmed us at different angles within that world which is SO different from any way that I have filmed a music video before. Most of the video took place in post including the voice-over parts we recorded for the intro voicemail part. Overall, the entire process was insanely cool and a learning process for me because I was working in a different way than I have been used to or how traditional music videos are filmed, especially at the indie level. I am so proud of what we have created and owe a lot of credit to Alex who did such an amazing job at bringing my Kryptonite world to life!

My highlight of 2020 was being able to do two drive-in country music festivals. Despite things being shut down, I was still able to perform and do what I love and rock out on two stages and perform my summer anthem “Burning Bridges” that I released last summer for fans in person. It was an incredible experience to be up on those stages and to be one of only a dozen artists that were able to actually get a chance to perform last year with so much shut down/restricted. Also my song “Burning Bridges” going number one on Canadian Indie Country radio was a huge honour and milestone as well so 2020 was a really great year for me. I truly do practice what I preach though when I talk about choosing to see the positives or find the silver lining in any given situation/scenario that may typically be viewed as negative. I don’t let anything keep me down or hold me back so it was great to bulldoze my way through 2020.

I am really hoping that people see how we’ve pushed the limits of creativity with “Kryptonite” and done something really outside the box so I want this song and music video to get the recognition that it deserves. I am hoping that we are able to reach more audiences with this song being country but also having some pop/rock elements to it that make it unique and appealing to wider audiences outside of country music too. I would love to be able to tour soon as well but that might have to wait until 2022. I do have an album that is almost finished as well (I keep adding to it since we’ve kept pushing its release so it’s going to be a full length album instead of an EP at this point). I would like to add 2-3 more songs to the album so that might be in the works by the end of this year. I have been planning this album for almost two years but I want to be able to tour and promote it so we’ve been waiting for that opportunity.

Overall, I really want to keep putting out music that people love and can relate to and be able to perform and connect with my audiences as much as possible while spreading love and positivity and bringing awareness to causes that I am passionate about like mental health.

I would love to write with or open for Kelsea Ballerini, The Chicks or Luke Bryan. I am also a HUGE fan of Emily Weisband and it would be a DREAM to write with her! Some other talented artists I would love to collaborate with or open for would be: Carrie Underwood, Kane Brown, Maren Morris, Halsey (I LOVE cross genre collabs and I love her voice!). There are so many it’s hard to choose/narrow the list down especially keeping it in one genre since my musical taste is pretty vast! A major collaboration dream of mine has always been to sing with Elton John since I was a little kid so that would be truly a dream come true!