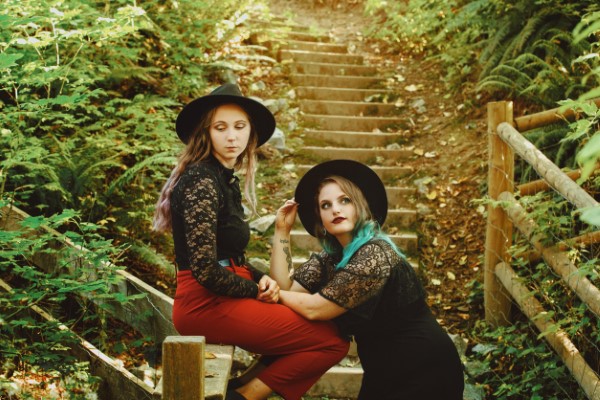 Vancouver, BC-based duo, Strange Tides is made up of Victoria Carbol & Kristen Bale. The two have released their new single, “Black Skies”. The track is a much-anticipated release following the duo’s 2020 FACTOR Canada-supported debut “Criminal”.

The duo shares on Black Skies,

“Black Skies began with Kirsten messing around on a micro guitar and grew into the sound it is today when Victoria fleshed out a chorus and bridge. Our first song, “Criminal”, is sonically more in line with Victoria’s grittier tastes, so for our second song, we wanted Kirsten’s preference for quirky melodies and unusual instruments to shine. We’ve got a falsetto bass line in the intro and a baritone guitar, so the song is strangely empty in the mid-range. As well as this, Kirsten pushed Victoria – in a good way – to write a piano part for the track, which our producer Dan Ponich tweaked into something that sounds like the gentle rain the lyrics talk about.”

Blending the different aspects within these developments, the single is heavily influenced by the production qualities of Jenn Grant’s ‘Dreamer’, and the old-country-pop of Taylor Swift, while midpoint transitions bring Fleetwood Mac tendencies. Together with a balance of lyrical reflectiveness and directive dominance, it truly is an undeniably gorgeous listen.

Check it out below, and find out more about Strange Tides via our Five Questions With segment.

Strange Tides is a folk-rock duo from Vancouver, Canada, comprised of Kirsten Bale and Victoria Carbol. By day, Kirsten presses buttons at an MRI facility. Originally from the UK, she brings the folk aspect to our duo with the Celtic influence of her youth. She also plays more instruments than she has fingers. Victoria was born and raised in Vancouver and, as such, likes her music like she likes her weather: dark and gloomy. She has a side gig composing theme songs for book characters on her YouTube channel, Inquillery, and offers feisty vocals and haunting keys to the Strange Tides collaboration.

We like to think of our music as a quirky fusion of folky melodies and rockin’ guitar solos. We have an eclectic range of tastes and we think you can see that in our music, though overall we’d classify ourselves as folk-rock.

Our writing style is highly collaborative! We’re always jotting down ideas independently from each other as they arise. When we feel a concept might resonate with us both, either lyrically or musically, we send it to the other to add a verse, a bridge, a hook—whatever is needed to turn the concept into a full song. Victoria has a knack for writing catchy hooks and Kirsten is a natural poet, so we find the combination of our different skills makes the process very easy. It was actually that ease of collaboration that solidified our decision to become a band.

While we miss live shows, the pandemic has actually been uniquely beneficial to our writing process in the sense that, for the first time, we have been able to dedicate all our focus to creating and recording without the pressure of polishing a set for performance. There was a time before the pandemic when we were gigging twice a month, so most of our energy went into that. During the lockdown, we were able to finish writing our EP and begin the recording process. Stay tuned for that later this year!

Our debut single, “Criminal”! Of the five songs on our upcoming EP, it is the most collaborative, and best represents that bridge between folk and rock that we love to walk. It tells the story of shared spiritual trauma we experienced at a church we attended a few years ago, around the time we became a band. For that reason, it has really shaped our sound. When we formed the band, we were intending to go the route of acoustic folk music, but as we wrote “Criminal”, we discovered we had a lot of buried anger, and pure folk no longer seemed to fit the tone of the music we were creating. The sound quickly morphed into the folk-rock fusion you hear today.

So many! The queen, Avril Lavigne, was a big reason both of us decided to try our hands at songwriting way back in the day. Feist has brilliant instrumentation, and Joni Mitchell is a classic. Oh, and Arcade Fire! Shania Twain! Leonard Cohen! There are so many. As our own career has blossomed, we’ve also had the pleasure of meeting a number of fantastic local musicians here in Vancouver: Hello Victim, Charlie PS, and Vox Rea to name a few!