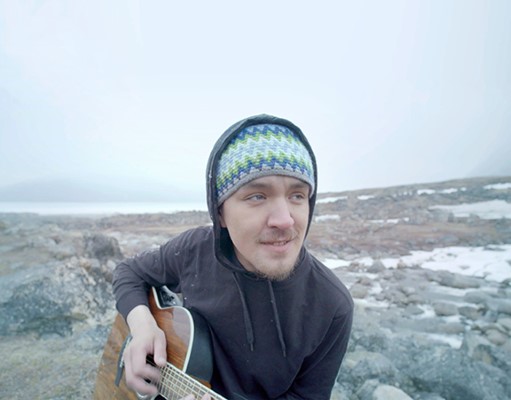 Award-winning alt-rocker, Joey Nowyuk has released his newest single, “Pray”, along with a video to accompany the release.

Joey Nowyuk’s name has been top of mind for some time now, with his previous release “Nalligigakku (Because I Love Her)” hitting #1 on the Indigenous Music Countdown. Currently nominated for the CBC Searchlight Contest, the track has stacked more than 100,000+ streams across platforms, adding to his previous hundreds of thousands via Soundcloud.

Joey Nowyuk’s beat-heavy, guitar-driven songs have beamed beyond Northern borders like the rays of optimism and hope they espouse — including translations across Inuktitut, English, French, and Japanese.

“I want to reach people around the world, just as much as Nunavut and Canada,” he says. “Tumitit is the Inuktitut word for ‘footsteps’ in English and, as the title suggests, I want others to walk in my footsteps by continuing to improve their lives and reach for their goals.”

Check out “Pray” below, and find out more about Joey via our mini-interview.

My name is Joey Nowyuk, I am a singer-songwriter from Pangnirtung, Nunavut, and my debut album, Tumitit, will be released on July 16th, 2021. I have been making music and writing songs for the last 8 years. I am excited to release my first full-length album this summer!

Tell us about the recording process behind “Pray”…?

I actually flew to Ottawa, ON from Pangnirtung, NU to work on my debut album, Tumitit. We worked on the album for that whole week. I remember focusing on recording my vocals first. I recorded “Pray” in Ottawa with producer and creative director of Hitmakerz, Thor Simonsen, when I was in the production process for my album.

The highlight of 2020 for me was filming and releasing the music video for my single, Nalligigakku (Because I Love Her). We filmed in Pang in the late spring/early summer and released the song in August 2020. I was happy with the response we got from fans after releasing the music video and the song reached number 1 on the Indigenous Music Countdown.

I hope the album does well. I want to be able to make music again, and we’re already working on the production of my next albums. I have quite a few songs now and I’m excited to release more music for my fans even after Tumitit is released. I want to get into performing live more, especially after the pandemic eases up. I am hoping to do more concert and festival appearances in the next few months, especially around the arctic, other parts of Canada, as well as overseas.

I always thought it would be awesome to collaborate with a Greenlandic artist. I listen to lots of Greenlandic music and although I can’t quite understand what they are saying when they’re singing, it is almost like Inuktitut music, and our languages are very similar. Also, Elisapie would be great to collaborate with one day. I like her songwriting style and would enjoy getting the chance to work with her either on a song or opening for her set!