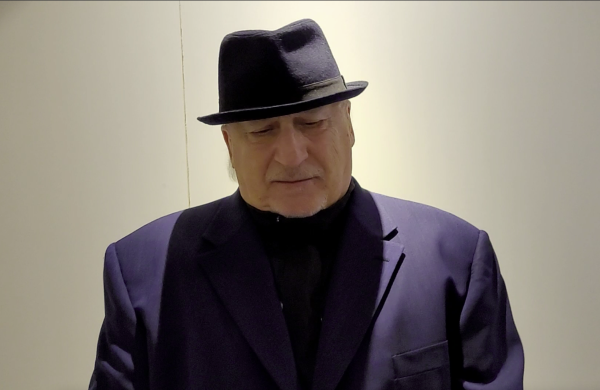 “Courage” is from Saunders’ recently released debut album, It’s About Time! An emotional, soulful ballad featuring his expressive tenor, “Courage,” and all the tracks on the 12-track LP, boast a stellar line up of some of Canada’s finest stage and studio musicians — including the late Michael Fonfara, Danny Weis, Danny McBride, Glen Morrow, Stacey Heydon, Igor Romanyk, Demo Cates, Gary Taylor, and Michael St Clair. The album was produced by Saunders and Gord Paton and recorded at Toronto’s Sky Blue Studios, Eastern Sound, and The Rhythm Ranch; Saunders wrote or co-wrote 10 of the songs on the album.

While the character in “Courage” laments not having the “courage to find the way,” Saunders himself has had the fortitude and drive to pursue multiple creative passions throughout his career — the first being music. His grandfather owned The Bermuda Tavern on Yonge Street, fostering an early love for music and performing in Saunders that started on stage at Toronto’s Yorkville clubs, and carried him to L.A. to a songwriting contract with Epic.

Over the ensuing years, Saunders’ career path took him in more diverse directions; a versatile and sought-after performer with multiple skills, he has appeared in over 60 film, television, and stage productions — including lead roles in both Jesus Christ Superstar and Hair.

Recording and releasing an album as a solo artist, however, is an accomplishment Saunders always dreamed of while carving out a successful career on stage and screen. “I am so happy to actually release my first solo CD in my long and diversified career,” Saunders says. “After all these years, this is something I have dreamed of doing for decades — and now it’s released to the global community on the EMG label.

“I am humbled and excited to see how the future unfolds for me and my music.”

In honour of Earth Day 2021, Saunders contributed “Courage” to the Heal the Earth project, which brought together legendary Canadian artists such as Murray McLauchlan, Gowan, Tommy James, and Andy Kim with independent artists for a virtual music celebration on Earth Day, April 22. The online event raised funds for Earth Day Canada and was headed up by Sandy Graham, owner of Cashbox Magazine Canada, and actor, musician, and Order of Canada honouree Tom Jackson.

Check out “Courage” below, and find out more about Paul via our mini-interview.

Hello, my name is Paul Saunders, I am a Canadian Singer-Songwriter, I live in Toronto Ontario. Check out my website http://pauljamessaunders.ca for more info on myself and my diversified careers.

Tell us about the recording process behind “Courage”?

Courage is a song that was written by me a few years ago it was originally composed as part of a musical that I had written “The Joker”  which was produced in several theatres. After recently reviewing my catalogue of songs to pick the tracks for my debut CD “It’s About Time” I realized how significant and relevant the song and lyrics were so I rearranged the song and added new vocals at B-4 Studios in Whitby ON, Canada.

It was chosen as one of the tracks for the one-hour worldwide music/doc “Heal the Earth” in celebration of Earth Day 2021 that featured other artists like Andy Kim, Tommy James, David Pomeranz, Gowan, Alan Frew of Glass Tiger, Don Graham, Spoons, Barry Stagg, Marshall Potts and Tom Jackson who also acted as Producer with Sandy Graham Executive Producer (Heal the Earth)

The highlight of 2020 was working with Entertainment Music Group (EMG) Records and Sandy Graham who convinced me to release my legacy CD “Its About Time” – the best decision possible. EMG has a great Team, I am blessed to be part of that musical family.

What I would like to accomplish in 2021, is to get back to live performance and getting airplay across the planet with my new single “Courage” and my CD “It’s About Time”

And spreading Love, Hope, And Healing to this world we live in…

Yes, I have discovered many new indie artists, hosting and producing my own daily radio show on Cashbox Radio “The Rock And Soul Review”.

I am very impressed with the amazing artist Marshall Potts,  I would love to collaborate musically with him, make some great videos (he produced the video footage “Courage” and Heal the Earth) and songs, and open for Marshall on some live shows in the near future.

Set your Author Custom HTML Tab Content on your Profile page
Related ItemsCanadianCourageEric Alper PRInterviewIt's About TimePaul Saunders
← Previous Story Five Questions With Timothy J
Next Story → Get ready for “Homesick”, the latest single off an upcoming album: Andre Pettipas and the Giants