Home / Interviews / Get ready for “Homesick”, the latest single off an upcoming album: Andre Pettipas and the Giants

Get ready for “Homesick”, the latest single off an upcoming album: Andre Pettipas and the Giants 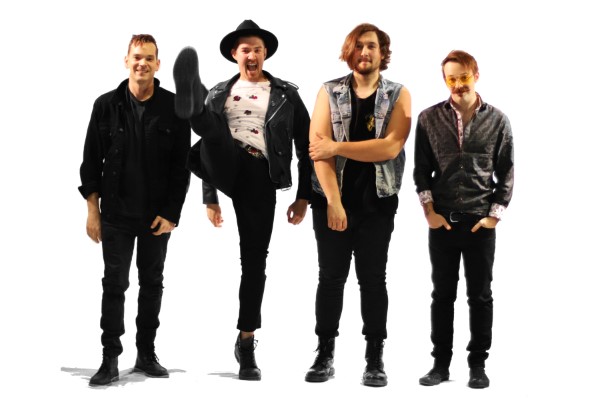 Andre Pettipas and the Giants just released their new single “Homesick”. A nod to the late eighties and early nineties rock sound with soaring guitars and classic rock vocals, the track will have fans blasting it in their cars on the drive home after a long day at the cottage this summer.

“I wrote ‘Homesick’ early on,” Pettipas explains. “We were touring through Alberta and we did this gig where only four people showed up. It was just one of those nights, where I was like, ‘What am I doing with my life?” The feeling passed, he adds, but the song stuck – even though Pettipas initially didn’t think it was a fit for the band. “Once we all put our stamp on it though, it ended up being a crowd favourite.”

The fact that Thorn also loved the track was just the icing on the cake: “No word of a lie, when I first put ‘Homesick’ on after he laid down his guitar tracks, and heard his entrance on the first chorus, I literally had tears coming out of my eyes. To have Christopher and all these musicians from some of our favourite bands on our record, it’s really something.”

With their live performances, stellar musicianship, and habit of finding grist for the songwriting mill in everything from southern rock to hip-hop and pop to prog, Andre Pettipas and The Giants are a rarity.

The bands’ first single “Sympathy Card” from their upcoming album “No Fools No Fun” hit #27 on Billboard’s Active Rock Chart and broke the top 50 on Billboard’s Mainstream Rock Chart in North America. The band was showcased internationally at Live At Heart/Sweden and were the Arkells: Leather Jacket Cover contest winners.

On “Homesick”, here’s what the group had to say:

How are you feeling about the upcoming album?

With having to hold off on the release a full year due to the pandemic we are thrilled to finally be letting our labor of love out into the world. We recorded it live off the floor at Chalet Studio in Uxbridge, Ontario with producer Brian Moncarz (Alice Cooper, OLP) who really helped us capture our energy. With us being on the tail-end of this pandemic we are thrilled to be able to finally hit the road and tour this the way we intended, paired with our live show. We stayed fresh throughout the year by rehearsing while not on lock-down, demoing from our respective studios, covering some of our favorite songs that inspired songs from the album, and doing live streams frequently. “No Fools No Fun” captured the essence of our band in a way that we’re super proud of. We made many sacrifices (physically and financially) to make this project a reality and can’t wait for everyone to hear it.

How does this song compare to the previous single “Sympathy Card”?

“Sympathy Card” was a damn the torpedoes, full steam ahead rock n‘ roll track which really helped us establish what kind of energy we bring forth as a band. It was also the first time we charted on Billboard, hitting #27 on active rock in Canada. “Homesick” shows a more delicate side while keeping that same intensity but in a more controlled manner. It’s got a darker over-tone and is a mix between an 80s power ballad and a 90s grunge track. It was a song that instantly stuck out to our producer in early conversation listening to our demos. Listening back to the track I remember exactly how I was feeling when I wrote the song and later recorded the vocals. The emotion is there and that’s what I hope to portray every single time we play this song; like an actor gets into character, I like to bring myself to the time in my head where this song was written so I can be genuine with the performance.

What does “Homesick” mean to you seeing as it was written during a time where the fans who support you now weren’t around? How has your perspective changed?

The lyrical matter of “Homesick” began after a show in Western Canada on a Tuesday night where we had a handful of people there and frustration set in. I knew that life on the road was my reality and nights like those really tend to crush your soul. We worked our asses over the last few years to build the connection with our fanbase and work on our product so that we can sustain a career with our music. I spent a good chunk of my life on the road as a sheet metal worker being away from family and friends so the lyrical matter is multi-faceted. I had a realization throughout writing the song, “When the lights fade, you’re still by my side”; meaning even if things aren’t going the way that I had hoped or planned I still had the support of my family and friends to get me through the hard times which is really crucial. This song hit instantly with our fanbase live and will hopefully garner a slew of new listeners. My perspective of the song went from a sad one to one that I couldn’t be more proud of. To me, it’s our best song to date and one from the album that we have been itching to release. Having Christopher Thorn of Blind Melon (who are my all-time favorite band) featured playing slide guitar on the track just brought it to another level. The song taught me that if you work harder and/or smarter you’ll get better results.

What can listeners expect from the new album?

With “No Fools No Fun” you can expect an album that doesn’t hold anything back. It captures the energy and fun that we bring forth in our live show. Recently I was finally able to pinpoint what “Grease Coast Rock N’ Roll” sounds like musically; that being southern power pop/rock n’ roll. We had a bunch of guests on the album which really helped us expand that fun factor. It’s one of those albums that you can listen back to and keep finding new parts deep in the mix (especially when the songs end) because they were recorded together live off the floor. Moncarz really helped us let loose and focused on us letting our true form fly. You work with some producers and they can take the wind out of the sail. This was the exact opposite with him. His energy level was the same as ours, he showed no frustration if we had a couple of bad takes and was just an all-around genuine dude throughout the whole process.

“Put bluntly, No Fools No Fun is the perfect soundtrack to chase away the late pandemic blues and a rarity in itself, the kind of record that – even when you think it can’t get possibly get any more fun to listen to – it does” – Kevin Young (Journalist//Moist Keyboard)