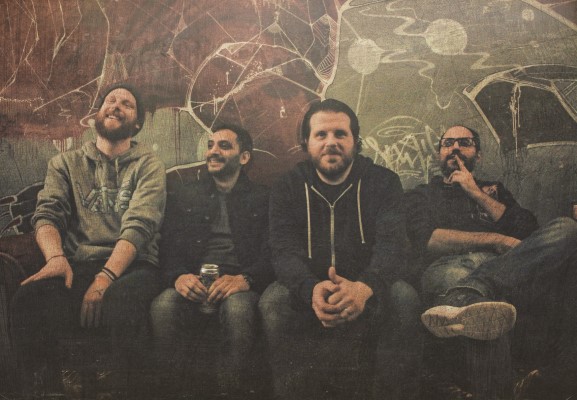 Eyes offers an outlet to help others work through their feelings both positive and negative. Not aiming to take over the world, these 4 regular guys are carving out their own little niche in the music scene for people who may be into unconventional music.

Check out the release below, and find out more about the band via our Five Questions With segment.

We’re Diamond Weapon! A post-hardcore band based out of Toronto. I’m Louis Tentsos, and I do vocals and guitar. There’s also Nick Richards on guitar and vocals, Marco Vani on bass, and Jason Bradfield on drums.

We’re kind of a throwback post-hardcore band to the late 90s/early 2000s era of the movement. We’re really into dynamic shifts, musical dissonance, and just…chaos, I guess? (laughs) Lyrically, just an attempt to be honest and vulnerable – both when speaking about personal feelings and emotions, as well as when providing societal commentary.

It actually took a while to get going – at the beginning of the pandemic when we really couldn’t do anything, it was really hard to draw inspiration anywhere. But eventually, it started going. We recorded our EP in September 2020, just as the second wave was beginning. So, that was an experience, but it got us into the right frame of mind for music again, and writing since then has come a lot easier. On top of which, since this was a great time to acquire new skills, I also took a music engineering course online through the Pro Mix Academy, and that was wonderful!

Oh man – that’s a tricky one. There’s some recency bias here, as we just filmed a video for it, but I would say “the House on 65th Street.” I think it’s a very good encompassing of all the features I mentioned about our writing style earlier.

Although a completely different genre of music, I have a soft spot in my heart for Basia Bulat. I think she’s one of the best songwriters in the world at the moment, and her last album – “Are You In Love?” – was incredible. Band-wise, Pine and T-Rex Marathon out of Ottawa are both amazing. More locally, Peacemaker, Single Wound, Junko Daydream, Polarity, and New Design are all fantastic. More recently, some great Canadian bands have released great albums in 2021; Blackout Orchestra, My Evil Twin, Trauma Lanes, and Pioneer Anomaly. Things are definitely on the up-and-up for Canadian music!