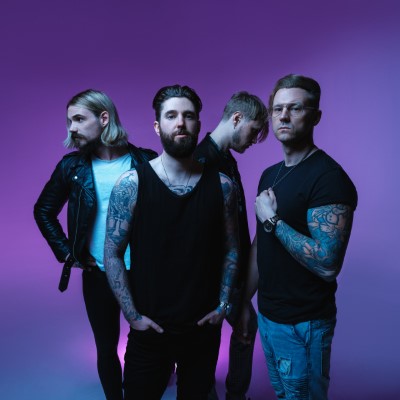 STEREOS is a name that’s been floating around the pop-music scene for over a decade, yet no matter the time that passes, they come back stronger and catchier than ever. This now includes a new single, “Look Good”, a song that frontman Pat Kordyback wanted to “keep (a) positive sound and message while also touching on how important it is to own your place in this world, especially when it’s hard to do so.”

It may be over a decade since the release of your debut album/single (which I was obsessed with, BTW), but your pop sensibility has only gotten stronger and catchier! How have you grown musically, lyrically, personally as a band?

Well, thanks so much for saying so! I think like most people we’ve all changed quite a bit on a personal level and just have so much more valuable perspective on both music and life. Thankfully, we didn’t change much at all in terms of the writing process, which has always been first and foremost about hook-driven pop songs through a live band filter, but I do think there’s an added depth in the lyrics and meaning behind the songs that we never could’ve achieved if we all hadn’t grown up quite a bit.

Your new single “Look Good” comes out with perfect timing for summer weather to hit. How did you keep up a positive vibe, including on this track, while creating throughout the pandemic?

That’s a great question, and I think this song specifically illustrates both sides of what you just mentioned. It really does have the classic Stereos elements and vibes, which have always been upbeat, but it comes from the perspective of feeling good about and loving yourself despite hard times. It was written during a pretty tough time for me personally, and I wanted to keep the positive sound and message while also touching on how important it is to own your place in this world, especially when it’s hard to do so. I think that’s something so many of us can relate to after the last year we’ve all had.

The cover of the new single, featuring the stunning @auroramatrix, makes the release pop even more! How was it decided to not have yourselves on the cover?

“Look Good” is all about being fiercely yourself, and we needed the single art to represent that. We worked with our old friend Marc Andrew Smith as a Creative Director, and as soon as Aurora was advanced as a possible candidate, we were immediately and unanimously on board. I personally think it’s the best cover art we’ve ever created and could not be happier with the result.

Since debuting in such a unique era as the “Much Music days” to now working in the “social media days”, what are the advantages now vs. back then? Any disadvantages?

I’d say the number one thing we’re enjoying now is our independence to do exactly what we want to. And to be fair, I don’t think we would’ve been ready to steer the ship this much back then, we learned a lot back then that was necessary to know where we want to take things this time around. As for how the industry has changed, there are so many ways in which we really had it good back then and just as many ways in which the industry today is better at supporting artists. All I can really say is I’m happy we have such a strong team around us as an independent artist to help us navigate the constantly changing landscape of the music industry. I think at the end of the day, after the songs, your team is the most important thing on your side to take you to that next level.

Well, 2020 kind of prepared us for the possibility that so much can be out of your control! But we’re resolute in releasing new music over the summer, a full-length album in the fall, and then the number one reason we all do this: getting out there and playing live. We cannot wait.