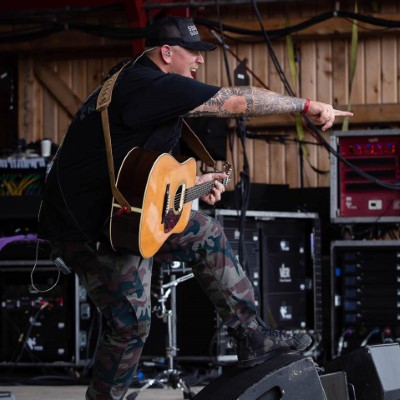 Award-winning Canadian country singer/songwriter, Graham Trude has said farewell to his service overseas, to get back to basics and focus on what truly matters. After battling Post Traumatic Stress Disorder (PTSD) and alcoholism after several tours in Afghanistan, Trude is returning to his much-anticipated solo career with the release of a new single entitled “PTSD”.

After a successful run as one half of country music duo The Singing Soldiers, a band dedicated to mental health advocacy among veterans, Trude is eager to sonically explore more of his creativity through his solo career.

“This song is extremely personal and sheds light on a subject that is all too often kept in the dark and misunderstood,” says Graham. “My struggle is not unique, and PTSD serves as an anthem for military personnel, veterans, first responders and for everyone who has experienced trauma.”

Combining emotive lyrics with the power of keyboard, drums, acoustic, electric, steel, and bass guitar, “PTSD” further explores Trude’s journey after he made the important decision to enter a trauma program to find help for his PTSD.

“I’ve heard numerous times in my life that I wasn’t alone,” says Graham. “However, it wasn’t until I was in the presence of other individuals who were battling the same demons I was, that I truly felt I wasn’t alone in my struggle.”

Check it out below, and find out more about Graham via our  Five Questions With segment.

I’m Graham Trude, a singer/songwriter and Afghanistan Veteran currently residing in Ontario, Canada. As a result of my tours in Afghanistan, I deal with a mental health disorder called PTSD every day.  I am a recovering alcoholic.

I’ve certainly been keeping busy and creative during the pandemic but regardless of the pandemic, creating music is my therapy and something I dedicate time to every day. It’s amazing how healing it is to get lost in writing music and in songwriting.  It is not only my muse but also my therapy.

That’s a great question, in this moment in time, I believe I would suggest the current release, PTSD. These are extraordinarily difficult times for a lot of people.  Whether you are suffering mentally or physically, my hope is that this song will remind everyone that you are not alone.  As a whole, we need to come together as a society and support one another.

Currently, my favourite Canadian artist would have to be Dallas Smith. I grew up listening to him and his style of music.  He is a brilliant lyricist and songwriter.  I also admire Alexisonfire, Silverstein, and a number of others from underground scene. Even though I am a country artist, I grew up listening to these bands and they have played a major role in influencing my music.