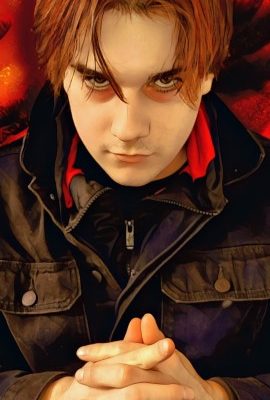 The self-proclaimed indie metalhead leaves it all on the mix as he storms the gates with his newly dubbed genre cyber metal. A sophisticated remix of synth, industrial, heavy bass, and percussion intertwined with traditional metal maximized, “Weird Equals Cool” is a welcome foray into a constantly evolving genre. Where S4lvati0n picks up is off the trail of his idols before him, blazing a new course into headbanging utopia.

“In 2019 and 2020, I was at my lowest mental health-wise,” S4lvati0n shares. “I lost my motivation completely, and I stopped being myself.

“I became a bit of a dulled, ‘chilled-out’ caricature of who I was before,” he reveals, adding, “but the thing that I find most outstandingly upsetting is that people started telling me I was ‘cool’ now, and they started talking badly about how I was before.

“It was like someone was telling me something behind my own back in a weird quad-dimensional way. In a way, society was telling me that my dull, unmotivated, depressed self was how I “’should’ be.

“That is exactly what the line ‘you hate when I smile, and you laugh when I cry’ stands for,” he continues. “When you’re different, you get penalized for doing things that make you happy; you get rewarded when you let go of yourself.

“My whole message is that, if you are weird, you are special.”

S4lvati0n takes no prisoners on the track, opening with fiercely dark melodies juxtaposed with charmingly dreamy synth. Equally as impressive as his exquisite production on the song is his near-inhumane vox; a spectrum of damning roar to harmonic falsetto, S4lvati0n runs the scale in hauntingly beautiful strides — deep and growling, to begging and pensive. Compared to Oli Sykes, S4lvati0n fluidly switches between angelic and demonic snarls through his vocals; a testament to his devotion to his craft and his commitment to exposing the rage of all those who are considered anything but normal.

Beyond production values, his lyrics are savagely explicit, unashamedly leaving it all out to dry. S4lvati0n makes no apologies; his angst serves as a shallow grave to those who’ve wronged him, and his resolve to make sure they know.

His emphasis, he says, is on the injustices the unorthodox individuals have to face in the world. Through his imagery in captivating lyrics, his quest is seemingly simple, yet tangled in complexity. How do you tell the world that you don’t have to “fit in” to actually become the most normal of all? It’s a task this artist is ready to tackle.

For all the heartbroken, the pushed around and dejected; for all those who seemingly can’t catch a break, can’t be themselves — those who have to feel the persistent nagging of a society that didn’t want them, and identify as misfits on the fringe of a world devoid of acceptance — there’s S4lvalti0n. And he’s coming to save us all.

Check out “Weird Equals Cool” below, and find out more about S4lvati0n via our mini-interview.

Hi, I’m S4lvati0n and I’m well, strange I guess. I’m from Northern Ontario in a small town called “Sturgeon Falls”. There’s not much there honestly. Schools and restaurants I guess. But yeah, I went to university in Montreal for computer science. After doing three years there I finally imploded and went all in with my music. I’ve always hated school, even though I excelled at it. Just because you’re good at something, it doesn’t mean it gives you any sense of accomplishment, you know? I’ve always been extremely volatile. Teachers didn’t know what to do with me, I just couldn’t really be tamed (enter Miley Cyrus pun). By that, I mean that I’ve always pushed the boundaries in ANYTHING I’ve ever been a part of. In fact, if I’m not allowed to push the boundaries, I get depressed and my drive fades away. Because of all those prior experiences in which I was told to act like others, I’ve got this built-up anger.

Tell us about the recording process behind “Weird Equals Cool”?

When I’m about to write a song that I’m gonna release, I have this funny feeling inside. It is a feeling that “This is it”. I write a demo a day, and never touch it again. But I always know, even before writing, when the song is gonna be “A song”. It was the case for WEC. I had this very dense, but very brief phase where I only listened to 8-bit versions of songs. I really, really enjoy the simplistic nature of those versions. I’ve also always thought that the contrast between heavy guitars and video game-like synths were an untouched gold mine in the music industry. Because quite frankly, nothing is better than closing your eyes and imagining yourself being the hero in your favorite video game whilst headbanging. When it comes to the meaning behind the track, I’ve analyzed the people around me in my life. I’ve seen how the “unorthodox individuals” get treated, and quite frankly it is absolutely tragic. The outside-the-box thinkers are the innovators: the people that will bring the world to a better place. The saddest part is, because those innovators get made fun of, picked, and stomped on their whole life, the grand majority of them cannot use the unbelievable gift that they were given at birth. It is a gift of sensing what is “right” without any logical thinking. Picasso didn’t use a mathematical formula that created a symmetrical work of art; he created what he felt was “right” for the emotion he had. Society tells us that we need to go to school. But I’ve realized that school is only a limit. It is an invisible “safe path”. In fact, school is a risky path in my opinion. Because it is a trap. And if you don’t like what is in the trap, you’re stuck. I’m not saying school is bad because it really isn’t. I’m just saying that society has stomped on the unorthodox thinkers and told them they need to act in certain ways so that they can water down their intelligence and creativity to make money for the government by going through school and working for them. I don’t know.

In all honesty, the release of “Post-Human Survival Horror” by Bring Me The Horizon was my favorite moment of 2020. Yes, literally out of everything. When I heard the song “Kingslayer” for the first time, I think I balled my eyes out. And when I heard the song “Dear Diary” for the first time, I bounced instead of walking for a week because of the breakdown. Of course, 2020 was terrible for us all, but Bring Me The Horizon knew how to make us forget.

I honestly am the biggest non-planner in the world. I don’t necessarily have goals set for 2021, because I don’t know how fast things will happen for me. But I do know that I’ll be working on music 24/7. It is very possible that there will be 3-4 new singles along with an EP before we call 2021 quits.

Oh, my. Okay. First of all, I’d like to collaborate with YUNGBLUD. He is an amazing, amazing person. He’s also part of my generation and I think he’s got similar fiery energy to me. I think a S4lvati0n and YUNGBLUD collaboration would blow the roof off by how much weirdness, ADHD, and energy would get bottled up in a 3-4 minute song. He’s so talented, and it wouldn’t surprise me that when the rock world once again dominates the industry, YUNGBLUD will be the one in front with his pink socks. Another one is Sullivan King. He’s just now entering the rock world, and I really think both our energies would make for a one-of-a-kind hit. Of course, Bring Me The Horizon would be insane (Opening for them would also be mental). But that’s wishful thinking haha. When it comes to other artists, I’d also enjoy making songs with people completely out of my scene. If I can get Harry Styles or Justin Bieber into a metal track, I think I could call my life complete. Generally, I just want to evolve the genre of rock. I want to bring it back to the mainstream. Oh, I almost forgot… Corpse would be absolutely mental on a heavy track, wouldn’t he?