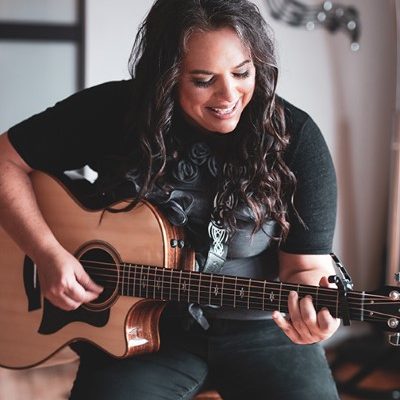 “‘Together’ was written a few years ago with my co-writers Rick Tiger and Jeff Wanex in Nashville,” Richard says of creating the track. “We wrote it after one of my trips to Europe where I got to perform in Budapest. I remember thinking that, although the majority of the audience didn’t understand English, they could fully understand the music I was playing. It’s true what they say… Music is a universal language!”

On “Together,” Richard utilizes all that country music stands for: a simple, but poignant message, buried in the roots of family, and friendship.

“Being ‘Together’ is always my favourite place to be, and that is the feeling I wanted to encompass in this song,” she says. “The lyric video for ‘Together’ is created by Warren Robert; we wanted to remind people of that special feeling we all get when we are with the people we love and care about — family, friends, loved ones, and the joy of spending time in places that make us happy.

“The take-home message in this song is to not take any of these things for granted, and to enjoy every minute of being ‘Together.’”

Check out the lyric video for “Together” below, and find out more about Lisa via our mini-interview.

I come from New Brunswick, Canada, and blend the sounds of rock, blues, and country, and one of my covers, “Jolene”, which was performed in Nashville, alongside Vince Gill and The Time Jumpers has reached over 130,000 people online.

Tell us about the recording process behind “Together”?

Together is a song I felt I had to try to reach people with as it has been a year of feeling completely disconnected from everyone for so long. I think that is what people will connect with the most in these lyrics. The simple things we all missed. It’s been a year of reflection for everyone. Singing the song without it being officially released had a great impact and response from the audience of all ages online and a few in person. I am excited to have Jason Barry CCMA Hall of Famer and Dean Brody’s producer and lead guitar player, producing this song and the album. I feel like we have a great connection to get the right feel and sound I am reaching for with my music.

Tim Hortons in Atlantic Canada and some other franchise owners live the song so much when they heard it the first time they asked me to perform for Kids’s Day Camp. It was the first time they had an outdoor venue to promote the camp day and have an. Artist featured. I was honoured and happy to help. It’s all about the kids and supporting an amazing facility for kids who may not have this opportunity otherwise. I was able to tour the kids camp and I was happy to see they have a music program which they have asked me to be a part of this year. It will be in line again and we how next year will be in person.

Finish recording the album with Jason & hopefully releasing it in late fall.

Terry Clark is a female Canadian country icon that I feel I identify with the most. So incredibly proud of her for following her dreams to Nashville at such a young age. She has been a role model for many over the years.

Chris Stapleton has this raw powerful voice and real down-to-earth stories in his songs that just get you. I am working on being the female version.