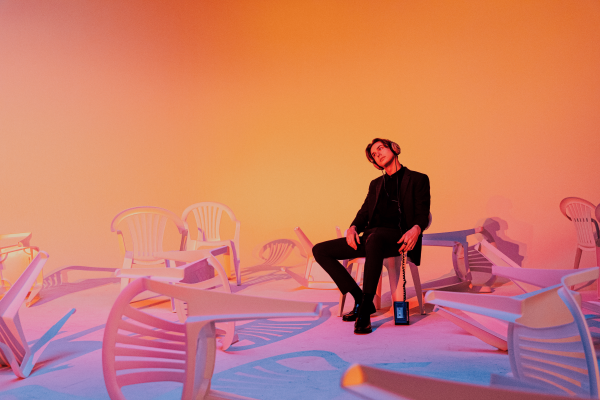 Vancouver, BC-based pop artist, TITUS BANK has released the new single, “I Do Yeah” from his forthcoming debut solo album.

While Titus previously made waves with his ambitious, song-a-day 365 Songwriting Challenge (during which he wrote, recorded, and released 185 in the span of a year), “I Do Yeah” showcases a more mature and fully realized pop vision.

The song is the result of multiple writing sessions with Toronto pop quartet Valley—evolving from a sea breeze acoustic sway towards an incandescent swirl of synths, tasteful tremolo-and-fuzz dusted licks, punctuated by TITUS’ rafters-reaching vocal glide.

Check out the video for “I Do Yeah” below, and find out more about Titus Bank via our Five Questions With segment.

Hi! My name is Titus Calderbank and I go by TITUS BANK. I grew up in a small town in BC. From a young age, I was surrounded by music. Whether it was going to church and singing songs or my siblings leaving their instruments around the house, I was almost raised to become a musician. I didn’t fully realize my passion till I was almost out of high school and I realized I wanted a real go out of this. That’s when I moved to Vancouver to realize this dream of mine!

In 2017 I challenged myself to write a song every day for the whole year. I failed, but I wrote 185 songs and I learned an absurd amount about writing and producing fast, and forcing creativity to flow. Nowadays I practice waiting for inspiration and to work slower and more thoughtfully. The two styles have really helped me so much over the years! My music has gone from totally weird indie to singer-songwriter folk music now to alternative pop. I can’t help writing these huge anthem/ballad-esque choruses so It’s been so fun combining them with a more modern bright pop style!

I’ve been focusing on becoming a better producer during this pandemic. It helped me in a big way because prior to it I would go off to Toronto to do these writing trips with these amazing people and producers and now because of the state of the world I had to become a little more self-sufficient and it’s been so much fun!

Well, it would have to be the song I just put out, “I Do Yeah”. This song was like catching lightning in a bottle. My manager had brought to my attention a Toronto band called Valley, and suggested I write with them. He connected us and I flew out to Toronto to meet them. It was honestly the best co-writing experience I’ve had to date. We hung out and got ice cream and watched movies, such a great start to a co-write. We proceeded to have several writing sessions and each time we walked away with a slapper of a tune. This song is a product of that amazing chemistry we all had felt. Give it a listen, you won’t regret it.

I’ve always loved The Zolas, but they just put out this new song “Yung Dicaprio” and it is such a smasher. I’ve also really been into Sunsetto who dropped “don’t leave”. Also gotta yell from the rooftops about Luca Fogale, absolutely incredible voice.