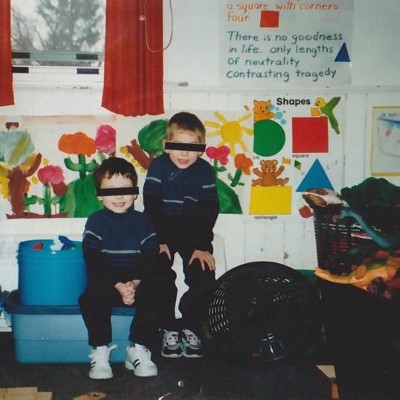 cleopatrick, a Canadian heavy alt-rock duo has released their highly anticipated debut album, BUMMER via the band’s own label Nowhere Special Recordings. Alongside the album release, the Cobourg, ON-based two-piece have unveiled the video for their latest single “VICTORIA PARK.”

“From the moment we wrote “VICTORIA PARK” we knew it would be the opening track on BUMMER. It’s the sonic mission statement for our debut album. It’s our thesis. Our first impression. It’s named after a real Victoria Park here in Cobourg, Ontario Canada. A place where Ian and I have both spent countless summer days and nights throughout our lives. It’s a green space that was named after Queen Victoria in an effort to impress the crown, during a time where this town was so young and prosperous that they truly believed they could be chosen as the capital of Canada” explains vocalist and guitarist Luke Gruntz. “Standing here today in what is now a sleepy rural retirement community, I feel a strange sense of tragedy lingering around this park. In my eyes, it is a monument to a long-lost ambition, and for that reason, it inspires me.”

The video for their latest single “VICTORIA PARK” is directed by Boy Wonder and shot on location in Cobourg on a SnorriCam rig. The video for the track is meant to capture the chaotic, monotonous, and explosive energy of the song, while personifying the concepts of isolation, uncertainty, and inner conflict through its protagonist played by the band’s dear friend James Edward Campbell (Degrassi). Watch the new video for “VICTORIA PARK” below.

In celebration of the release of BUMMER, cleopatrick announced a number of Canadian tour dates for October and December. Kicking off at the Commonwealth on October 14, 2021, in Calgary, AB, the seven-date tour, which also includes shows in Edmonton, Saskatoon, Winnipeg, Montreal, and Ottawa, will wrap up in Toronto with a show at the Danforth Music Hall on December 11, 2021. A complete list of dates is below. Tickets for the tour are now available to purchase here.

“These dates have been a long time coming” shares Gruntz. “We can’t wait to finally visit all these cities that we haven’t been able to check off this list until now. See you soon, Canada!”

Written, recorded, and produced by cleopatrick and their close friend Jig Dubé of Ottawa punk band Zig Mentality, BUMMER sees the band harnessing all the magic they’ve been brewing over their two-decade friendship and funneling it into a record that aims to re-invigorate the rock landscape from the ground up. BUMMER is out now. Check out the album right here.