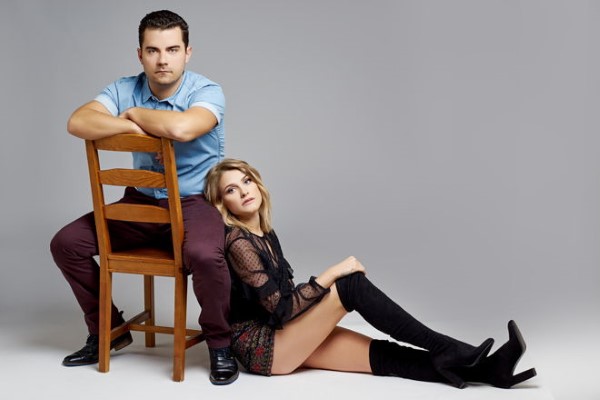 Cross Parallel released their new single “Better With Time” at a great time.

Having new music to release at the best of times is stressful and exciting, but doing it at a time when artists, writers, and producers can’t gather to work together on their music the way they usually would is a challenge. Yet, Cross Parallel has done just that with the release of their new single “Better With Time” via Mussel Records across all streaming platforms on May 28.

It’s a beautiful love song that tells the story of the kind of relationship that gets better with time. It’s also the type of song that you want to listen to while at full volume while driving … you know … that kind of tune we all love to hear in the summer!

2015 CCMA Spotlight artist and Ray McAuley Horizon Award-winner Danielle Marie and her husband Jordan Pritchett, guitarist of the JUNO-nominated, platinum-selling band Faber Drive, are the British Columbia based duo that makes Cross Parallel. This pair met at a songwriting session back in 2015, at a time when they were both pursuing solo music careers. They then decided to come together to form Cross Parallel and haven’t looked back since.

I caught up with Danielle and Jordan, via email, to talk about their new single, how it came together, what it took to make it, and more.

People still need to hear and relate to the great sound of new music, especially love songs, and we at Canadian Beats would like to congratulate you on the release of your single “Better With Time.”

With that being said, let’s chat about it. I really, and I mean really, like it. Your harmonies are spot on and you two are connecting so beautifully. I can feel that as I listen to it. This melody gave me the “WOW, what a great tune” feeling immediately upon listening to it.

Thanks for having us on! We wrote “Better With Time” with two other co-writers in Nashville. Danielle had it in her notes for ideas and one of the guys started jamming on a sweet-sounding riff he had. It was one of those writes that was just a blast and the song seemed to write itself. Ever since writing it, it’s been a meaningful song to us, very much about our relationship, but we also believe it can be relatable for any couples that stand the test of time. In particular, how we have grown as individuals but also together since we met.

Who wrote “Better With Time” and who produced it?

We wrote it with Derek Norsworthy and Brandon Green, very talented dudes! And we actually produced it ourselves with the help of a very talented band and crew in The Warehouse Studio in Vancouver.

Tell us about how it was produced, with all the restrictions that are in place right now, and what was this experience like for both of you?

There were definitely some restrictions that took away from the full studio experience like masks, limited people in the control room, etc. but the magic was still the same. There’s something about creating a song with an awesome group of people that will never get old. With this song, we were all feeling the vibe and everyone had input for ideas. That’s a great feeling when we’re all having that much fun.

Let’s move on to some of your other music …

You released a cover of “The Christmas Song” with Jordan’s award-winning country artist dad, Aaron Pritchett, and his brothers from AtlantisOne. Tell us about that experience.

“The Christmas Song” is one of our favourite holiday songs, and the same with them. It’s been a favourite in the family for a long time, so it was really fun covering that and putting all of our own spin on it. We wanted to keep it simple, something you can put on both classic or modern holiday playlists, so we did it pretty remotely. Dad came to record his vocals at our place and my brothers recorded their vocals from their home on Gabriola Island. It was kind of one of those projects that my dad, brothers, and I will cherish doing together and for it to be such a nostalgic song to all of us makes it pretty special.

Cross Parallel has garnered worldwide attention from the music industry and fans. You have built a huge online presence, with over 175K+ streams on Spotify, 25K Apple Music streams and 29K+ YouTube views in your first year as a duo. What does this mean to you, both personally and professionally?

To both of us, we are directly grateful to the fans that support us and listen to our music. It feels like we’re still just getting started, but to see the numbers like that is very humbling! Especially as an independent group, it means the world to us. Same with on a personal level. We both feel so privileged to have fans from Faber Drive, or Danielle Marie when she was a solo artist, support us through the years to now what we’re doing today.

You are gearing up for the release of your debut album that includes “Better With Time.” Can you give us any more details about this … when it will be released, the title? Or, do you want to be able to keep us in suspense for a bit?

We can’t tell you TOO much about it! But … we will say … that we plan on the end of the year or early next year release. And … it will be a pretty diverse sounding, but still have “our sound” that is our harmonies singing together. If that makes sense.

Now, some random questions, so your fans can get to know you a little better …

Was there an artist or an album that had a profound impact on each of you that made you say “Yah, I want to do this for a living.”

Know what, this is actually a tough one to answer! We were both those kids when we were really young, having a “singing group” with friends, putting on shows singing our favourite Britney Spears or Backstreet Boys songs, or songs we wrote back then. Danielle was always in choir, band, private music lessons, etc. Jordan always loved to sing and got his first guitar for Christmas at 11 and had bands in his teenage years. But we will give you our “turning points,” when it became a reality that we can do this for real:

For Danielle, she got an experience shadowing an engineer (Sheldon Zaharko, who we still work with to this day) in a Vancouver studio at age 15. It was a session with recording artist Tara Oram accompanied by a talented band and crew. She loved music and performing all her life, but this was her first experience in a professional studio setting and she fell in love with the entire creative process. Sheldon then gave Danielle the opportunity to record a cover song, and she’s been recording and releasing music ever since.

For me (Jordan), I remember several studio experiences growing up and saw firsthand the career of an artist having a dad who brought me along for some of it. But if I’m being honest, I didn’t think country music was for me back then! Maybe it was just that it was too normal for me, growing up having my dad?? At the time he got me that electric guitar for Christmas when I was 11 years old, I was inspired by punk rock bands like Sum 41, Blink 182, Greenday, Billy Talent, etc. It took me a couple of years to actually start lead singing in the bands I was in for those teenage years. Harder to say when my turning point was, but it definitely started when I got that guitar! Sorry for the long-winded answer.

Who are your biggest influences so far?

These are honestly the hardest questions to answer because we have so many! But for Danielle, the artist who really made her dive more into songwriting is Ed Sheeran, but she has so many different influences for different aspects like performing, writing, etc. Taylor Swift would be another one as an artist overall.

For me, I also have many, but to kind of continue my last answer, I’ll give my dad the credit he deserves. He’s provided me opportunities since I started playing music that most people don’t get and I’m grateful to have gotten. He’s always been a fan and supported whatever music I’ve done. As an influence, he does so much that others and I can learn from as an entertainer, an artist, and a human.

If you’re on a long drive and can only listen to one album the entire trip, what album would each of you choose? And, would your partner want to listen to it as well?

Amazing question! One that we can agree on and we’ve both been loving lately is anything by Kacey Musgraves. We’ll go with Pageant Material, but we could even say her album Golden Hour too. They’re so great from writing to production. And we just never seem to get sick of her!

Do you have a dream collaboration?

All these amazing questions! We’ll go with Ed Sheeran for this one. He’s pretty amazing!

With all the many social media platforms that exist today telling the world your life story, is there anything about each of you that would be of interest to your fans; something that they couldn’t find on your own social network or even Google?

Danielle was a highly competitive ballroom dancer who competed in (and won) many international competitions in the US!

For me … I love golf. That might be apparent sometimes on social media, but probably not often! I even watch it. I know, weird, right? And I started watching it when I was like 12. Please don’t unfollow me! haha

Easy! One of the big things we both look up to my dad for. We want to be remembered by fans as good people. We feel the best legacy a person can leave is to make a positive mark on other people’s lives.

We, at Canadianbeats.ca, want to thank you Danielle and Jordan so much for taking the time for this interview and helping your fans get to know you a little more. We wish you much success in your future and are excited to see what great things are coming your way.