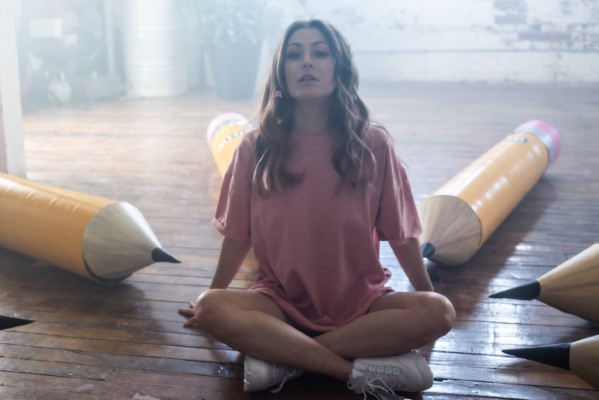 FEATURETTE’s stripped version of “The Blame” is the beginning of Lexi’s healing process.

Toronto-based electro-pop duo FEATURETTE, composed of Lexie and Jon, released the music video for the stripped version of their song “The Blame”. The duo initially released an electronic version of the track on their latest EP Dream Riot released in 2020. This beautiful, raw and heartbreakingly stripped-down version is Lexie’s testimonial as a victim of sexual abuse.

As the director and producer of the new music video shot in Toronto, Lexie said the song is the beginning of her healing process and finding her voice, both through art and to speak about her past.

“When I originally released The Blame on our 2020 record Dream Riot, I was only just starting to confront the idea of my abuser. I wasn’t ready to face the issue head-on, and decided to bury it in my art, although it was starting to bubble to the surface organically,” says Lexie. “The first step is coming to terms with what happened and letting others know that what’s happened or is happening to them, isn’t their fault. The first step is finding their voice – my voice.”

FEATURETTE’s EP Dream Riot has garnered over 700,000 streams and their music has been featured on popular Netflix shows like Ginny & Georgia, Working Moms, and Kim’s Convenience.

On “The Blame”, here’s what FEATURETTE had to say.

Does this version of the song allow Lexie to be more vulnerable about her story? Why or why not?

I think it absolutely does. In the other version, I was singing my lyrics, but it’s as though it wasn’t in my voice. I think I did everything in my power NOT to get real with the words I was saying because it was too close to home. This exposed version is raw and real. I sing with my heart. It’s slower, which gives more time for the lyrics to sink in, and sting. Not to mention, the pairing with the visuals in the music video really brings the story to the forefront and makes it crystal clear what the song is about.

Why did you feel it necessary to release a second version of the song?

I honestly thought that putting out the original version of The Blame would be enough to serve as a release for me, and set me on a path to healing. But as I looked inward in Covid, I came to terms with some of my mental health concerns and self-love that had been lacking, and I came to terms with the notion that this whole issue was a lot bigger than me. I also realized that I’m probably not the only one that this abuser has preyed on. That realization, more than any other, is what spurred me on. Knowing how badly I needed to make this, to free me of this burden I’d been carrying around alone, also likely meant that there would be so many others that need this kind of representation too. After the release, the outpour of support, and the amount of people whose stories have reached me because of seeing this art, is staggering, tragic, and so powerful. But now, we have each other, and we’re not alone with our trauma anymore.

What was the concept for the music video? How does it complement the story being told through the music?

There were a lot of things that needed to be said through the art and visuals, rather than overtly through the lyrics. I wanted to set the scene in a school, so I brought in some of those elements. Desks and lockers, the giant surrealist pencils Jon and I built, paper airplanes, all made to pinpoint a specific place and time in my life. I also did all of the styling myself, so I leaned into a 90’s aesthetic, because I’m a 90’s baby, and wanted to show that I was at the age where actually wearing butterfly clips when this happened. I even show my age on the candles on my cake. I wanted to have images of childhood innocence, contrasted with shadow and darkness. Images, of paper predators, like a kid’s arts and crafts project, but tainted.  One of the key lines for me is ‘it’s just like music through my brain… it’s driving me insane’ – referring subtly to the fact that this was a music teacher of mine. I visually represented that by tying myself up in reels and reels of magnetic cassette tape, so literally trapping myself in a web of music. It was a powerful moment for me to rip myself free from that web. Another powerful moment was shattering the glass, an invisible barrier I’ve had blocking me my whole life. On the glass I had written: ‘You won’t own up to what you did, so I’m taking all The Blame’, this is the crux of the song for me. It’s not my blame to take; in no way, as I was a child, am I to blame. But I’m still taking that on, because no one else will, so I’m making it my mission to bring this issue to light so that this doesn’t continue to happen. So that victims don’t have to carry this burden alone, and we can start to normalize conversations like this one, that leads to healing.

Oh yes, the floodgates have really opened for me with this release. I’m definitely done with flirting with heavy issues, and ready to dive in. There is one song in particular that we’ve been playing live for years, that we’ve never recorded. Every time we play this song people lose their minds because it just has so much raw and real energy. The timing wasn’t right to record it then, but I think now it’s time we slay that dragon too. Covid has taught me the life is short, and I’ve got too much to say only allude to a message and worry about subtlety. At this point, I’m ready to shout it from the rooftops! Time to get real.