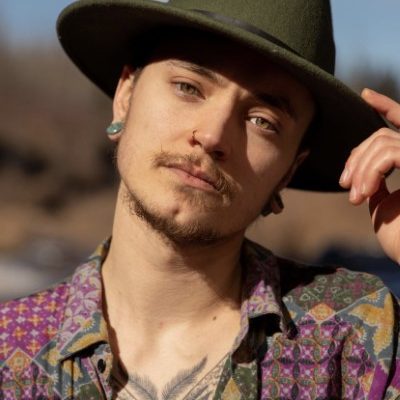 Edmonton, AB-based singer-songwriter, Emmet Michael has released his debut full-length album, I Hope You’re Home on May 28, 2021. Along with the release, he unveiled a video for the single, “Devotion”.

Growing up in a conservative, Christian household, Michael realized her was queer when he was young. He spent years in private education that compelled him to deny who he was, but after enrolling in public high school, it helped him to realize it was time to live his truth.

“Up until that point in my life, I truly thought I was crazy because I never had the words to be able to explain what I was feeling inside. I ended up immersing myself in faith, hoping God would be able to ‘cure’ me,” he confesses.

Sadly, Emmet’s self-realization of his queer identity sent him into a drug and alcohol-fueled lifestyle that saw him leave home and get expelled from school. At the age of 17, he checked into a treatment facility to put his demons to rest once and for all, and it was while there he picked up a guitar, ultimately setting him on the course he travels today.

“Songwriting opened a door for me to feel safe to discuss things I tried to push away for so much of my life. Through song, I wasn’t afraid to share anything. The album is about the journey and experiences I went through that led me to a place where I could feel like I was at home in my body and with who I was. It wasn’t always something that came easy.”

On the 14-track release, Emmet leaves no stone unturned, confronting his turbulent upbringing with unflinching honesty and openness.

“Each of these songs draw from very different experiences that share the common theme of self-discovery. I didn’t set out to make a record with that goal in mind, it just happened to naturally unfurl that way.”

Check out the video for “Devotion” below, and find out more about Emmet via our Five Questions With segment.

Hi Emmet! Welcome to Canadian Beats. Please introduce yourself to our readers…

My name is Emmet Michael, and I am a queer singer-songwriter from Edmonton Alberta. I grew up in a faith-based home, so my first introduction to music was through playing in worship bands both at school and church. In my early adolescence, I struggled to come out as transgender and relied heavily on drugs and alcohol to cope. It was while I was in rehab, at 17 years old, that I discovered songwriting as a way of channeling all of the emotions I’d suppressed and expressing who I was in a way I never really could before. I’ve been writing and sharing songs that shed light on the most vulnerable aspects of myself ever since then. I hope to inspire others to do the same, by embracing and celebrating who they are in their own lives.

You have just released your new album “I Hope You’re Home”. What can you tell us about the album? What was the writing and recording process like?

“I Hope You’re Home” is all about the experiences that led me to a place where I could finally feel at home in my own skin. More often than not, those experiences were extremely painful, but they taught me a lot about myself. Some of these experiences include what it was like for me to come out in the church, losing a close friend to suicide, and learning what it means to love and be loved by someone. Some of the songs were written years ago, and others just a couple of weeks before I started recording the album. Each of them represents some aspect of my journey that led me to where I am now. They are a profound expression of my innermost joys and pains.

Facing my shame head-on and allowing others to see me as I was, however messy and imperfect that was, gave me the incredible gift of meaningful connection to others. It taught me the depth of real love. This album is an invitation for others to explore their own uncomfortable feelings, and to allow themselves the space to feel them. My story won’t be identical to anyone else’s, but we can all relate to the messages portrayed in these songs. They are songs about the complexity and beauty of relationships, learning to love and accept ourselves, and longing for a sense of belonging or “home”.

I was very blessed to be able to receive funding to record this album shortly after the height of the pandemic. I had all of this time off and the money to be able to put this project together, so I applied all of my creative energy into writing and recording this album. I feel really lucky to have had the opportunity to really make the most of such uncertain times. All of my bandmates brought so much life into these songs and turned them into something far beyond what I’d imagined. I owe a lot of my inspiration and refinement as an artist to the musicians that I work with.

Along with the album, you released a video for your song “Devotion”. Can you tell us about the video?

Devotion is the oldest song on the album. I wrote it when I was 19 and in the throws of a complicated and painful relationship with my dad. At the time, I struggled to let go of my expectations that he would change. I was totally devoted to making him proud and gaining his acceptance, regardless of how many times he had failed to support me emotionally. I think that’s something a lot of people struggle with. No matter how many times our parents let us down or cause us harm, we still crave to feel their love. We want to make them proud.

I originally did plan on including the song on the album. I was afraid of what people in my personal life might think. It’s hard to put something that vulnerable out there. My band loved the song from the first time we played it in the studio though, and they encouraged me not to shy away from it. I’d been sitting on this song for years. I needed to get it out there.

I know that many others feel the way that I do. They have so much to say but feel like they can’t say it. That’s why I offered the opportunity for people to submit anonymous letters to their parents to be included in the music video. Each photo expresses something they wish they could say to their parents. I’m really happy with how the video turned out. Being able to express these feelings with so many other people who feel the same way is extremely liberating.

I have been writing songs more than I ever have before. A lot of the stuff I’m writing now is more vulnerable and raw. I’ve had a lot of time to feel my feelings and to explore things about myself and my past. That almost always correlates with my ability to create. My main instrument is guitar, but I’ve been tinkering away on my piano a lot more recently. I’ve had more time to develop that skill. I think there could be some piano-driven music coming from me soon!

On top of doing music, I work as a gardener for half of the year. That always really helps flex my creative muscles. When I wasn’t gardening, I took up embroidery for a while and started selling embroidered clothing as merchandise for my music! Having the opportunity to try new crafts has kept me sane in the midst of not being able to perform or see people in person.

I really like Dan Mangan. I think he’s a very poetic writer. I listened to Half Moon Run a lot in my adolescence and still love their music now as well. July Talk was one of the best live concerts I’ve ever been to. I think they’ve got a very unique and exciting sound. I just recently discovered Basia Bulat and love her work.