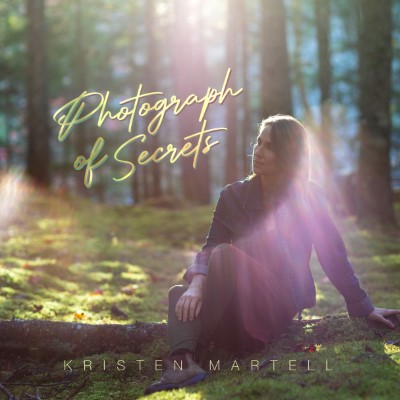 Kristen Martell released her new single “Photographs of Secrets” on April 29th. The song is a collaborative effort between Martell and award-winning artist Gabrielle Papillon, along with award-winning Producer Dan Ledwell (Jenn Grant, The Fortunate Ones, Rachel Beck).  Together, they weave a rich tapestry of sound that takes you on a journey towards a better future.  It is a hauntingly beautiful lullaby about finding the light at the end of the tunnel and discovering the clarity to march forward with confidence.

Kristen Martell has shown a remarkable amount of ambition in recent years. Since returning to music, she has consistently touched the hearts of her devoted fanbase with carefully crafted songs that embrace life’s challenges and quiet moments of beauty.  With her debut album ‘Coming Home’ (April 2020) recently nominated for the 2021 ECMA Inspirational Recording of the Year, Martell is an emerging artist not to be overlooked.

On “Photographs of Secrets”, here’s what Kristen Martell had to say.

What was the songwriting process for this song? Did you compose the music first or the lyrics and melody?

‘Photograph of Secrets’ was the third song Gabrielle and I wrote together. I brought the guitar pattern to her (which was inspired by the Iron and Wine song ‘Naked as We Came’) and we sorted out the progression. Gabrielle heard a melody and we both tweaked it to a point where we liked it. Then we let the song tell us where to go in terms of lyrics. We threw some ideas around, then I took it from there. Gabrielle later acted as an editor of sorts, helping to smooth out the edges and offer advice. She is a fantastic lyricist and had many great tips to share. It was important from the beginning that my voice be heard in these songs and she gave me room to explore. We had many ideas for the final arrangement, which we later worked out with Dan’s help in the studio.

What does this song mean to you personally?

We all have an inner vision of where we want to be and the key to our joy is following that inner guidance. ‘Photograph of Secrets’ to me is about discovering that inner knowing and leaving behind negative cycles. It’s a release of sorts. It’s about finding the confidence to march forward.

What was it like writing the song with award-winning collaborators?

I have a lot of respect for Dan and Gabrielle, as well as the drummer who played on the track, Jordi Comstock. They’ve been in the industry a while and I took in as much as I could. I learned so much. Each of them made the recording process look so easy and it was awesome to watch them in action. I never once felt out of place, even though I was the new kid on the block, which speaks volumes about their personalities! I always had a say in the decision-making, and never once felt like I had to take a back seat. All around, it was an amazing experience and I feel so fortunate for the opportunity.

Can listeners expect more music from you this year?

Yes! In the Fall I’ll be releasing the 2nd single from this collaboration. I like this next song a lot and am looking forward to sharing it. I’m also currently working out the details of a new body of work for 2022. To hear about new music follow me on socials @kristenmartellmusic or join my mailing list at kristenmartell.com.