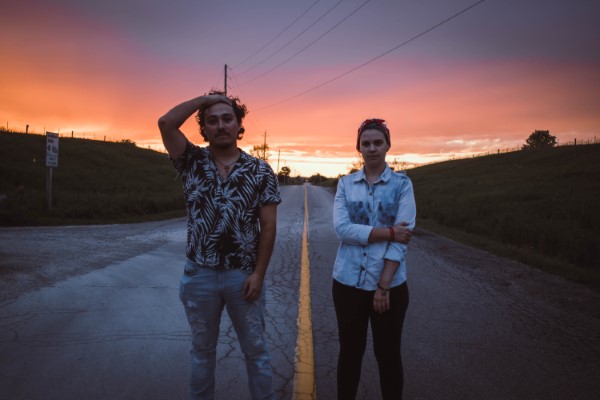 Toronto-based indie rock duo FXRRVST has just released Dear Friend; Part 2,  a follow-up to their 2020 EP  Dear Friend; Part 1. The EP garnered over 385,000 streams on Spotify and featured two singles, “Bad Things” and “This Rough Patch”, which received an impressive amount of airplay on CBC Radio and college radio in Canada. FXRRVST (pronounced “forest”) continues the dialogue started with the first EP, and adds a few new twists and turns with Part 2.

FXRRVST has released 3 singles and videos from the new EP, including the musically unconventional “Here’s The Key, Don’t Lose It”, which resonated with audiences instantly with its hard-hitting lyrics surrounding mental health. The duo then reclaimed their reputation for making hooky pop songs with their second single and video, “The Story Doesn’t End At Chapter 14. Their latest single and video, “Floorboards”, is anchored by an entrancing melody sung by vocalist Holly Forest. Opting for the “less is more” approach, the song is backed by a U2-esque guitar melody – minus the delay effect – that consistently reaches new heights as the track progresses.

The video for “Floorboards” stars Holly navigating her way through an abandoned house. While the outset of the video is bathed in light, the second half takes a darker turn as tension builds with each passing moment. Playing the lead role in the video is new to the vocalist, as the duo has previously limited themselves to cameo roles in prior clips.

Here’s what the guitarist Matthew Fuentes has to say about their latest EP.

You recorded both EPs around the same time. How did you choose which tracks would go on which EP? What was the narrative you were trying to tell?

All of the songs were originally recorded as a full album, but when the pandemic hit we decided to release two EP’s instead. We had to quickly pivot all our marketing and promotion plans since our tour plans all got canceled. We didn’t consciously choose a specific narrative to follow. We just listened to all the songs and sequenced them based on which songs sounded best beside each other. We decided to look for a silver lining in the time we had on our hands and decided to devote more time to promoting ourselves online, which worked out well for us. We were hoping by the second EP release that we would be back on the road doing live performances, but sadly we are still waiting.

Did the pandemic have an effect on the darker songs on the EP like “Left Lung Sinking” and “Floorboards”?

We wrote the album before the pandemic began, so it was a little surreal when the songs became that much more relevant with the pandemic. The lyrics were written to shed light on mental health and let our audience know that they are not alone, and through the lockdown process, we believe the songs resonated even more with our fans.

What makes the second EP different from the first one sonically and lyrically?

Because the two EPs were written and recorded together, there are not any major differences. We got to show off a few different styles of songs that as a whole make up our “sound”. Lyrically, Rough Patch, Bad Things, and The Story Doesn’t End At Chapter 14 are more focused on overcoming mental health issues, while songs like Anxiety, Veins, Fine, and Left Lung are centered around emotions that come with mental health issues.  Anxiety was our big shot at a rock song and it’s been really well received.

What was the writing and production process like? Did you divide the workload or was everything done by both of you?

Our co-writing process is unconventional but works for us.  When we write, it’s usually one of us having an idea, and the other coming in later and adding. Holly usually writes the structure and rhythm along with the lyrics and melody.  Then I listen and add notes (change chord progression, tempo, etc).  Once we have the song done in terms of lyrics and structure, we sit down and demo a bunch of ideas on piano, bass, and guitar.  Songs start to come alive at that point, and it’s then that we send it off to our producer for notes and drums.

If the story doesn’t end at chapter 14, what can fans expect from FXRRVST in 2021?

CHAPTER 15!?! Right now we are still playing things by ear but we know we can’t slack off now. We need to be fully prepared when live performances and touring opens up again, so we are spending a lot of time rehearsing the songs from both EP’s and trying to formulate the best show possible.