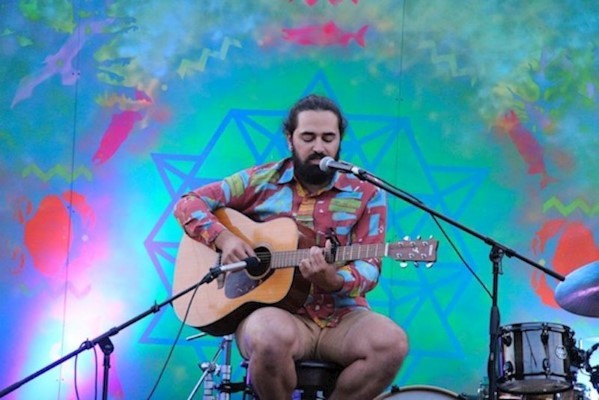 BC-based band CALICO has recently unveiled their new single, “My Darlin'” from their upcoming debut album, Under a Sudden Sun, which drops in August. The single is described as a calming, yet upbeat ode to a past relationship between a man and his dog, Saloh.

While living in the vivid setting of Granada, Spain, lead vocalist, lyricist, and rhythm guitarist, Tony Cecchetti, came across a young pup on the side of the road. Granada was full of dogs, but for some reason, this one stole Tony’s heart, leading him to take her home and create a life for her.

After a few obstacles, Tony managed to take Saloh back to Canada and eventually wrote “My Darlin,'” about their fated relationship.

The track utilizes Tony’s singular and poetic approach to songwriting, as certain verses feel like they come from a stream of consciousness. The instrumentation—with its sincere drumbeats, melodic bass line, and bluesy electric guitar add to the warmth and tranquility of the track.

“This song brings me back to a time in my life of adventure, risk, and acting on something that I deeply believed in,” Tony says. “I wanted to give an opportunity to an animal that deserved a chance in life and I had the honor and privilege to make that decision. I learned to trust my instinct and gut and, more than anything, to trust myself.”

Check out “My Darlin'” below, and find out more about CALICO via our Five Questions With segment.

My name is Tony Cecchetti and I am the lead singer and songwriter of CALICO. I am originally from Berkeley, Ca but moved to British Columbia in 2010 and have lived here ever since. I now live in Victoria, BC with my fiancee and our 2-year-old daughter. I started writing songs in 2015 when I was lucky enough to participate in some songwriting workshops a friend was leading out of Vancouver, BC. At the time, I didn’t play much guitar but over the years, as I began to play more, my songwriting grew and my ability to put lyrics to guitar became more comfortable and natural. Songwriting has become one of my deepest and most profound passions. Chris Couto is the co-founder and percussionist/drummer of CALICO. Jean Se Le Doujet is our bassist and Will Lloyd is our lead guitarist. All three live in Vancouver, BC, and are well established in the music scene playing for many of Vancouver’s finest musicians.

I write songs based on my experiences. Every song tells a story and reminds me of a time in my life, an emotion, or a journey. I have written many of my songs with a particular idea or prompt in mind. One is written about an art piece that inspired me, a conversation with a friend, my relationship with my guitar, growth and transformation, political unrest, and the list goes on. I am inspired by the context of the world around me, those I love and care about, and the natural world that never ceases to amaze me. Nature is a big element of my songwriting and a large component of CALICO. We live in one of the most beautiful places on earth here in the Pacific Northwest. Every song of mine is written as a poem. Some are poems first before I compose guitar along with it and some have the guitar parts written first and I match lyrics after the fact. Each song has been written in its own way in its own time.

We like to say that CALICO was birthed out of the pandemic. In March of 2020, at the start of the pandemic, Chris Couto and myself decided to start this project. I had written two albums worth of material that had been sitting around for years and Chris and I had always wanted to play in a group together. We saw this as our opportunity, as life had slowed down and there was more time for projects we never would of had time to do. Shortly after the idea manifested, Will Lloyd and JeanSe Le Doujet jumped on board and we all recorded our respective parts from afar. We would go back and forth until we agreed on the track’s completion. From there, the songs were produced by Chris Couto, sent off to be mixed by Braeden Rangno, and mastered by Stuart Mckillop. We now have released our first three singles and our debut album, Under a Sudden Sun, is set to release on August 6th. All during the pandemic. It has been an incredible time of creativity, friendship, and beginning a journey that we have always wanted to embark on.

“Oh My Mind” is one of my favourite songs of ours and is our first ever single that we released. It is about growing up and chasing memories. It is about discovery, unknowns, and overcoming hardship. “Oh My Mind” always brings me to a place of nostalgia and I hope it does a similar thing to our listeners.

You can find Oh My Mind on all streaming platforms.

I’d have to say Leif Vollebeck, Andy Shauf, and Half Moon Run are right up there. Wonderful songwriters that write beautiful and moving music that I listen to often.