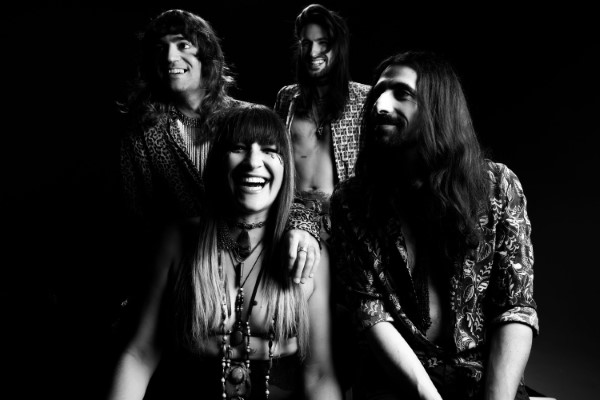 Canadian rockers The Damn Truth are back with their first album release since 2016, entitled Now or Nowhere.

The album comes 5 years after “Devilish Folk” and promises to be the band’s best album yet. With the help of Grammy-winning mixers Vance Powell and Nick DiDia, the album is chock-full of powerful guitar riffs and electric vocals.

The band’s rising star is indisputable, with more than four million worldwide streams, a number one single on the Quebec Rock Charts, and a Top 15 hit on the Canadian Active Rock Chart with 2016’s “Heart is Cold.” Stations around the world are adding the band to their rotation including UK’s biggest classic rock playlist, Planet Rock.

We caught up with The Damn Truth to learn about their growth as a band, and what messages they’re delivering to fans with their new album.

In those years since Devilish Folk was released, what has your relationship been like as a band? Have you found that you’ve grown in new ways? Or are there any significant things you’ve learned about yourselves as artists?

DAVE: Just as soon as Devilish Folk was released we had a member change on the Bass guitar. At that moment, we were devastated, gutted. But as they say, it’s darkest before dawn. With our new bassist, PY Letellier came to a cannon-blast of positive energy, a facelift on the outside, and a soul lift on the inside. We became stronger than ever, more confident than ever, and have never sounded betterŠ We haven’t looked back.

Growing as artists and as a family over the years, we’ve learned to appreciate each other’s strengths and have found ways to highlight those attributes.  Knowing each other so well and each other’s weaknesses, it would be wrong to hold a person to their faultŠ We kinda know what to expect from each other. We all have good days and bad ones but through it all, someone is usually there to try to lift the other when they are down and be the light when it’s dark.

On your website, you’ve touched on the ingenuity and creativity it takes to be an upcoming band in the industry, learning to shoot your own videos and create your own promotion. Can you describe what those experiences have taught you about the industry overall or how you approach that side of the creative process?

DAVE: We’ve been autonomous in our ability to turn on a dime and produce music, visuals, assets, and launch campaigns. We compose, produce, record, mix, edit, shoot, design, style, and so much more. For any given project, with a clear vision, we can carry the torch further and during times where we’re collaborating with others, we can illustrate better to them what our end goals are. It’s really key for bands and artists to be able to lead a TEAMŠ I mean, we can’t do it all by ourselves. But by being able to ‘grab the bull by the horns’ we can build a team for any given project and see an end result that is true to our creative goal.

Was this your first experience working with Bob Rock? What was the energy like between the band and your producer? Was it a positive experience?

DAVE: It was incredible. Above all, he is a wonderful, thoughtful and creative person. We witnessed a spark in him which shone brighter as the session went on. It was obvious that he really enjoyed the session with us. Somewhere during the 2nd day, as we listened back to our last take at ear smouldering volume (Bob loves it insanely loud), he turned to us and said “You guys are my new favourite band”! At least know we could stop holding our breath by that point hahaha.

And as a producer, beyond his incredibly vast knowledge of music, gear, and sound; he really knew how to cut through to each of us personally, to get us inspired, and to play passionately at that moment. Honestly, it felt like magic was happening. With Bob, we worked fast and played hard. We’d count off a tune and for 4 minutes we could play like we’d never played before. He always seemed to find a way to coax something great out of us and quickly. He’s really great at pulling obstacles out of the way.

When COVID hit and your entire recording process changed with Bob Rock, what were the conversations like as a band when it came to those next steps?

DAVE: It was crushing that we couldn’t finish the record with Bob. I’m sure there was a small voice inside each of us that felt like we needed Bob, or his room, or that magic moment back. But we were too focused on making a great recording; that we just plowed forward.  We took that confidence and momentum we built with Bob, packed a big lunch, and just went to work. Not to mention, we set a super-human-like deadline to record the rest of the record. It gave us little time to fret about anything. We are lucky to have a bandmate who owns an incredible recording studio in town and on a whim we can swoop into the studio to record. We gave ourselves 10 days to record and mix the rest of the record. Off to mastering it went!

What’s been the most rewarding part about making this album?

LEE-LA: I think that the most rewarding thing about recording these songs for me, is the fact that now, months later, I can just sit back and listen to what we’ve done,  just drop the needle on the first pressing of our album just for the pure purpose of listening to the whole thing from A-to-Z and I’m really proud. I  think we created something really good here.

Is there a particular song you think your fans will connect with the most?
LEE-LA: I’ve actually been asking our fans on social media to let me know what songs they are most digging and so far it’s seems that different folks are resonating with different songs. There hasn’t been a song on the album that hasn’t been mentioned as a favorite… so I think that’s a really good thing- that there’s something in there for everyone. If Rock n’ Roll is your jam that is…

Overall, as a band, has this past year taught you anything different about the way you approach songwriting or the way you create music in general?

LEE-LA: It’s not that I approach songwriting or creating differently per se, it’s more like I am different now. I think in some way we all are. For the good or the bad, we’ve all been affected by this last year that we’ve been through. It was very easy for me to sink into the darkness and depression of our communal global situation, but the realization that creating music with my band will always be my saviour, my sanity, and even my therapy, kept me going. They gave me a reason to wake up in the morning and I honestly don’t know what I would do without my band. They’re my best friends.

Is there a specific aspect of recording or performing you’re most looking forward to when the world finds its new normal?

LEE-LA: I cannot wait to get back on the road again. To get into the van with the band, my family, and tour this record. I am a traveller in my heart and soul, and this sedentary life does not suit me at all.

I also hope that we will be able to make another record with Bob Rock. It was such a positive and incredible experience, 4 days in studio seemed like a lifetime… I can only imagine what we could come up with if we had some more time together.