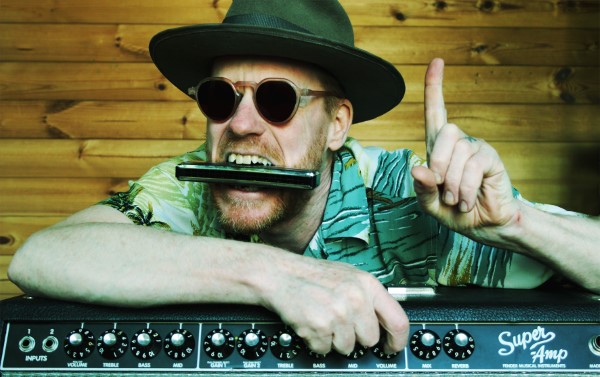 Renowned international bluesman Son Of Dave has written 11 golden songs on a hundred dollar piano for this, his upcoming album Call Me A Cab, which was released on May 14, 2021.

Put Call Me A Cab proudly alongside Randy Newman, Tom Waits, and Dr John… Though fans who have been following the London, UK-based Winnipeg, MB-born for decades know there’s also unique blues harmonica, croon, and growl.

First started before 2019, the worldwide shut-in gave Son Of Dave (Benjamin Darvill) time off from touring to perfect the album. Joined at home and in-studio (Hoxa HQ, London) by expert musicians Jimmy Hogarth, ‘Budi’ Butenop, Martin Slattery, and ‘KC’ Zenker, this is an organic record… How they made ’em 1974.

Check out the single, “End of Days” below, and find out more about Son of Dave via our mini-interview.

Introduce myself? Ever walk into a room of people and the host tells you to introduce yourself?  Just turn around and leave is my advice.

But no, here goes the middle-aged international alt bluesman bragging about thousands of concerts, 9 acclaimed albums, his book,  the Breaking Bad soundtrack the private party performance for Grace Jones, the Rizzlekicks sample, jamming with Neil Young…

Tell us about the recording process behind “End Of Days”?

She dragged home a hundred-dollar piano as a 50th birthday present. Learning to play it, was painful for the household and neighbours. But out poured the songs.

Then I layered up everything else up in the home studio (wires and microphones and gizmos moving from room to room) until there was a wonky version of the final product (this is known as a ‘demo’ but I hate that word). Then did it all over again to make the real record with my fantastic musician pals.

The oft-spoken about pandemic gave me and those fabulous musician pals the time to make this organic album lush and grand. Even getting together at HoxaHQ in London to do bed-tracks (and better piano) between lockdowns. The sirens wailing away outside.

‘End of Days’ in particular is a song about a grumpy old man. Inspired by one in particular- me and what I’ll likely become. Any resemblance to Dave is coincidental.

I mean, how can I begin to choose from all the magic moments that have brought us to this point? Are you insane? If you had a highlight, you should be very careful about sharing it with anyone. We’re all so desperate for positive memories of that year, might even snatch yours.

Hope is a dangerous mistress. There are achievable goals, and people (and viruses) who stand in the way. There will be more time spent in Canada, even if I have to smuggle myself in a coffin.

Then as if releasing this record isn’t enough, the next one will start to be drip-fed to you in Autumn. It’s back to harmonica-driven blues and beatbox mutations. Hopefully (oh damn there I am being hopeful) it won’t be too avant-garde for the average Canadian bum to dance and drink to. But it doesn’t take much.

Well, already jammed with Neil,  Spinal Tap, John Spencer, smoked weed with The Stooges (Iggy was having red wine and a little rest) under French Independence Day fireworks and played to 20K people supporting UB40. So I’m hoping (damn! again!) to top all that by singing a duet with Al Simmons somewhere in the Manitoba outback.