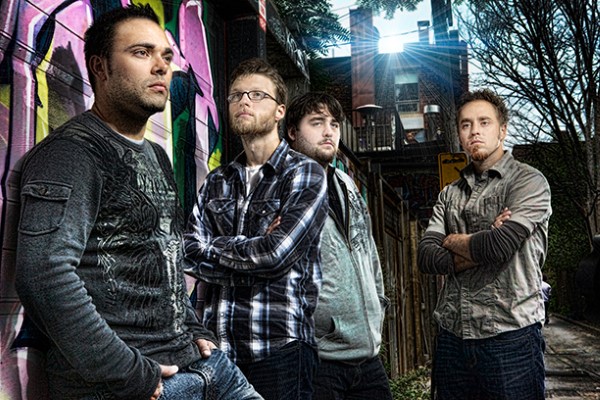 Following up their debut album, District of Broken Hope, “Fire” serves as the lead single from the group’s sophomore effort — a project they call a “vivid picture of who Ravenscode is as a band”.

The track, as they say, starts as many of them do – from a riff. “That main riff you hear at the start of a song that hits you like a punch to the face was written by Justin (aka Journey) one night before bed,” the band explains. “He knew right away that it was something special and recognized the full-throttle emotion that seemed to come with it.

“This feeling brought out one word ‘Fire’.”

The song actually serves as a promise during a breakup, where our hero assures he’s going to be just fine in light of the recent heartbreak because he is, in fact, fire. “And I’m here to burn this place down,” sears the lyrics. “You better back away and hide your eyes,” it continues to threaten, “as I burn brighter. Let the flames embrace me now ‘cause I am fire tonight.”

It’s the essence of energy that Ravenscode produces on the track that melts you into submission of its force. The chant “we want the fire, we need the fire, we breathe the fire” establishes an almost guttural Vincent Price-like pledge to darkness, illuminated only by flames.

The song is a flash-forward into the future of Ravenscode as songwriters and musicians; a testament to their grueling touring, and dedication to honing their craft on stages across Canada.

“The reaction of crowds while on tour was a true affirmation that this is what (we) were born to do,” they say, adding the multitude of fan videos, and cover tracks has been the most endearing to them of all their interactions with their audience. “Watching someone take the time to learn your song and have the confidence to perform it and put it out into the world is one for the best feelings there is.”

Check out “Fire” below, and find out more about Ravenscode via our mini-interview.

We are Ravenscode, a rock band from Windsor, Ontario Canada. The band is comprised of Justin Bezaire (Guitar and Vocals), Brian Daniel (Guitar and Vocals), Drew Larsh (Drums), and Michael Davidson (Bass). There are many incredible bands out there made up of very talented musicians, but what sets the great bands apart is whether or not you have something to say. Ravenscode has Something to say!

Tell us about the recording process behind “Fire”?

We do all of our recordings at SLR Studios in Windsor Ontario with the brilliant Marty Bak. The studio is fondly referred to as our happy place because it brings out the best of us musically. The song Fire started off the same way that many of our songs do, as a riff. That main riff that you hear at the start of the song that hits you like a punch to the face was written by Justin (aka Journey) one night before bed. He knew right away that it was something special and recognized the full-throttle emotion that seemed to come with it. This feeling brought out one word “Fire”. He then went to work on some chord progressions for a verse and chorus and some simple lyrics and immediately sent the song to the rest of the band. The rest of the band agreed that this song had a ton of potential and that our next focus needed to be completing the lyrics (the original song said the word “Fire” far more than any song should include a single word).

Brian and Justin sat down to come up with a concept for the song. They decided that the song would be written from the perspective of a person who is coming to terms with the fact that he is the reason that none of his relationships work out. He “sets fire” to them so to speak. By the end of the song, he decides to embrace this truth and be consumed by the fire himself.

As with many Ravenscode songs, Fire changed for the better while in the studio with improvements to the intro riff and solo as well as the removal of a few more “Fires”. What we were left with is a hard-hitting first single off of the album “Fire and Storm” that gives the listener a vivid picture of who Ravenscode is as a band.

2020 has been a tough year for everybody, but few industries have been hit as hard as the music industry. The lockdown and lack of touring make it difficult to find the upside. Luckily, we were able to book some time in the studio in late summer (in between Lockdowns in Ontario) in order to finish recording our 2nd full-length studio album “Fire and Storm”. This might seem like the highlight of 2020 for the band, but truth is, the real highlight of the year was not the release of the album, but the response from fans. We were blown away by the outpouring of support from new and old fans alike. We love hearing from fans about the connections they make to our songs, and this album’s release and corresponding fan reaction was definitely the highlight of 2020.

Our number 1 goal for 2021 is to continue to ride the success of “Fire and Storm”, starting with the single “Fire”. We have plans in the works for music videos as well as online performances. The real hope is to get back to doing what we love most, playing live shows!

There are hundreds of dream collaborations for us. Bands like Alter Bridge, Muse, Breaking Benjamin, Foo Fighters, and Three Days Grace just to name a few.