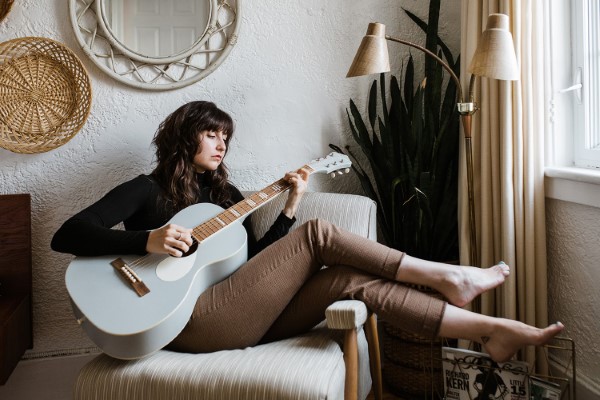 Ontario’s own Sleepy Jean will be releasing her first recorded offering, Idle Hands in midsummer 2021, but until then, she has unveiled her single, “Smaller”. The track is a meditation on the compulsion to curl up in a ball and physically occupy as little space as possible. Anxiety often turns into a dreamlike, soft-around-the-edges state of numbness, and this song is the sonic representation of that.

The upcoming EP sees Sleepy exploring her love of 1960’s folk music (“Smaller,” “I Don’t Belong”) while paying homage to the likes of Billie Holiday and Ella Fitzgerald (“Moonshine,” “Downer.”) The final track, “How’s it All Gonna End,” is both an ode to the Truman Show and an unnerving waltz that swells with a tension-filled current as she ponders that titular, existential question.

Sleepy partnered with long-time collaborator Dan Serre (Cat Clyde, Shitbats) to record and mix the majority of the 7 song extended play over the course of 2 months within the confines of a spare bedroom. Russ Donohue (Stonehouse Studios) aided in additional mixing, and mastering was completed by Kristian Montano (Montano Mastering) in Toronto, ON. Drums and vibraphone were provided by Marshall Bureau (Great Lake Swimmers, Jill Barber), with additional playing from Kaelin Murphy (trumpet), Phil Bosley (upright bass), and Al Aguilar (synthesizers).

Check out the video for “Smaller” below, and find out more about Sleepy Jean via our Five Questions With segment.

Well hello there! I’m Sleepy Jean – a nostalgic singer-songwriter based in St. Catharines, ON.

A combination of American Standard style songwriting (you know, classic songs that Billie Holiday might’ve sung) with 1960’s folk sensibilities and a hint of cosmic Americana. Songs come and go like rivers ebb and flow – sometimes I catch them, sometimes they catch me.

The song that comes next, How’s it All Gonna End. I’d watched the Truman Show the night prior to writing it and was struck by some of the parallels Truman’s life had with our current global predicament. When I woke up the next morning, the song was just sitting there staring me in the face. I have no recollection of it being written, just that it came to be.