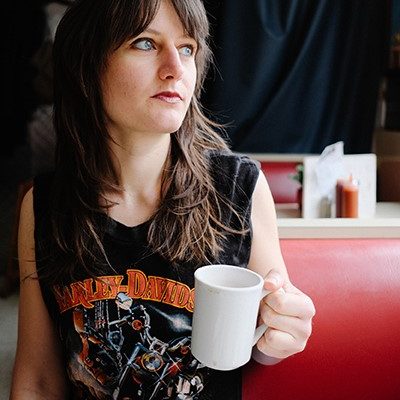 Canadian folk-country songstress, Claire Whitehead is back with her latest project, Thelma: A Country Opera.

And if the name sounds familiar, it should… Built through interpretation of the character Thelma of Thelma & Louise, Whitehead has churned a fable into a nine-track release about the fearlessness of the human spirit — including album closer, “No Right Way, Louise.”

“Thelma: A Country Opera is a ‘coming-of-agency’ story,” Whitehead explains. “It’s about the transformation of self and relationships when someone becomes disillusioned with the rules of our world.”

As a storyteller, Whitehead commiserates with the protagonist through a series of emotion-driven songs that speak to Thelma’s internal journey, and the album’s live performance features video clips from the film to cue songs.

For its part, “No Right Way, Louise” chronicles Thelma’s ongoing dedication to her best friend. Whitehead’s delicate but piercing vocals churn out a near-plea to Louise as our heroine succumbs to the inevitability of failure to live a life of restraints, and rules. “And they’ll chase us down,” Whitehead coos, “And they’ll spit from a truck. So hand me that gun, cuz I’m all out of luck.”

To tie the song together, Whitehead has self-produced a subsequent music video — a first in her lengthy career.

“To make this video, I tried to celebrate the song’s theme of prioritizing female relationships, while working under the constraints of the pandemic,” Whitehead reveals. “This was the first official music video I’ve made, or released, and I did it completely DIY on camera phones and editing on my laptop.

“I was lucky enough to have my sister, Anne, to film the footage and a friend and vocalist from London Ontario, Imogen Wasse, who sings live with me and fosters a lot of positive energy in our performances.

“The result has me feeling comfortable being silly on camera, while capturing the power of women working creatively together to make great things.”

Check out the video below, and find out more about Claire via our mini-interview.

Sure, my name’s Claire and I’m a musician based, as a settler, in London Ont (Treaty 6) and Tkaronto (Treaty 13). I’ve been performing as a guitarist, violinist, and songwriter for over 10 years, touring parts of Europe and North America with groups such as Blimp Rock, Forest City Lovers, and my own rock band, Carew. My most recent project is a country concept album called “Thelma: A Country Opera”, which extrapolates the title character’s journey throughout the 1991 film Thelma & Louise, highlighting the power of female friendship.

Tell us about the recording process behind “No Right Way, Louise”?

Recording was a really fun, organic process that felt like a cozy jam session. Peter Elkes and I sat facing each other in his studio with two different and unique acoustic guitars and some mic’s between us, and basically jammed it out a couple of times. He played some seriously tight licks on a Gretsch bronze Resonator, which made the song feel a bit saucy, like a Rolling Stones track. We also got Dani Nash on drums and Peter played bass too. Later we got some excellent musicians to add some beauty, with Kelly McMichael on keys and backing vocals and Christine Bougie on lapsteel. It all came together well and was fun!

Definitely finishing this album! And in addition to that, finding inspiration in the wilderness around me to shoot a DIY music video. This year has been messed up and disheartening in so many ways, but I found solace in the outdoors and found ways to try new creative skills like making videos, in order to connect with an online audience more than I have in the past.

I am currently starting a new recording project which highlights my more personal songs and some offbeat guitar compositions. My hope is to record that new material and explore my sound and voice as Claire Whitehead, rather than as a character like Thelma. Also, playing an actual show to real live people would be quite something.

Oh gosh! What an inspiring question…I would love to play with/open for The Weather Station, Bernice, Diane Cluck, Land of Talk, and so many more.