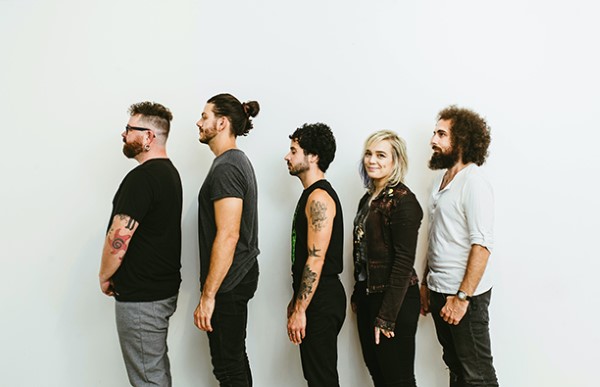 Canadian five-piece band, The Mandevilles are back with their new single, “Fading Colors in the Northern Lights”.

“Lyrically, it’s a bit ambiguous,” lead vocalist Serena Pryne nods, “but I love songs that leave room for the listener to make up their own minds about the story.

“For me, the song is about learning to let things roll off your back, and tuning out the bull****. It’s about letting go of senselessness, and of things that hurt your focus — like having the same argument over and over with someone.

“The main melody fell into my head when we were loading out after a show one night,” she recalls. “I sang it to myself for a few days; ‘something something morning light’… It finally came together in a session a couple of weeks later, and the words ‘Northern Lights’ just rolled off the tongue perfectly.”

“‘Fading Colors in the Northern Lights’ is our interpretation of a sea shanty,” the band  — Pryne plus guitarist Nick Lesyk, synth/guitarist Taylor Laslo, bassist Dan Risi, and drummer Brett Bendo — add. “We were plowing through the rum and channelling that epic scene in the Goonies when Captain One Eyed Wily’s ship is freed back into the ocean…

“We went hard with hand claps, and kicked the **** out of a homemade stomp box.”

Beyond that, The Mandevilles layered ‘guitarmonies’ to give this song its dark, pulsating rhythm, with especially triumphant guitar styling in the bridge and outro.

“Sonically, Nick was mimicking what a horn section might do to break the tension that builds through the whole song,” the band explains. “Think: Biffy Clyro, or Big Country.”

Check out the video below, and find out more about the band via our mini-interview.

Hey Canadian Beats! I’m Serena and I sing and write songs in a band called The Mandevilles. We’re a rock and roll 5 piece from Welland, Ontario.

Tell us about the recording process behind “Fading Colors in the Northern Lights”?

In the studio, we always try to push ourselves creatively but still serve the song. There’s a real darkness on this track and although the lyrics are a bit ambiguous, the vocal melody feels light and airy. As with any vocal recording I’m definitely a fan of ‘the fewer takes the better’. Keeping things raw and spontaneous is one the most rewarding parts of recording. I love just going for it and allowing myself to be vulnerable.

The guitarmonies play a huge part in ‘lifting’ the tension created throughout the song and Nick’s solo is particularly triumphant. Layering was everything and we did that in spades with handclaps and kicking the shit out of a homemade stomp box to fatten up the rhythm section.

We had an epic year on Spotify racking up over 300,000 streams and played two socially distanced sold-out shows at one of our favourite venues, Warehouse Concert Hall. The incredible sensation of playing those two nights in front of an actual audience will have to tide us over until live music is fully back in action.

Well, it looks like another year of mostly live-streaming is ahead of us. We’ll keep hitting that hard on Twitch and planning something special for some full band virtual performances as well. Releasing the album we’ve been working on for the last little while is the biggest thing on our plates right now… I’m hoping we have that finalized and Vinylized for late fall.

HAIM. One of the greatest bands out there. Their songwriting is top-notch. They’re pro players (who actually have fun on stage too) and they have swagger for days. Take us on tour with you Danielle, Este and Alana!