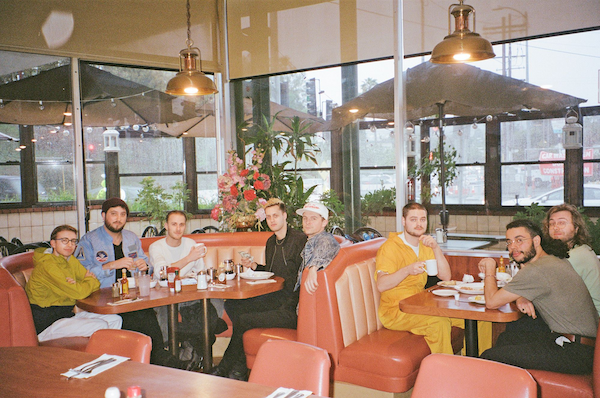 “We wanted to give our audience a moment to just sit with the music. Being such a large ensemble, every instrument and note you hear was carefully crafted and cared for, and by sharing the instrumental version with you, we feel we get to bring you one step closer into our world, and let each part of the dish speak for itself.”

“On this record we really expanded our overall approach to the arranging and orchestration of the record. We treated many of the tracks quite cinematically, working with a great string quintet and using our horns in a way that highlighted the grandiosity of the music. All this floated overtop of a solid foundation laid by the rhythm section.”

Eddie sets out to answer the questions ‘What advice would you impart on that younger self? And if you could pass your younger self a mixtape, what would it sound like?’ The resulting 12 tracks set nostalgic and vulnerable lyrical ruminations against a soundscape of simmering soul, fiery funk, spirited rock, hypnotic hip-hip, perennial psychedelic funk and artful R&B. The character of Eddie stands in as a representative for the group’s collective past identity but far from a concept album, he serves as a common thematic thread tying the songs back to those central questions.

Busty And The Bass first burst onto the scene in early 2015, releasing a pair of EPs—GLAM [2015] and LIFT [2016]—before unveiling 2017’s full-length debut, Uncommon Good and in the time since have amassed over 30 MILLION streams worldwide. In addition to packing houses on headline tours, including recent SOLD OUT shows at NYC’s Bowery Ballroom and LA’s Troubadour, they graced the stages of international festivals such as Made in America, Osheaga, Pinkpop, Montreal International Jazz Festival, The Great Escape, Ottawa Bluesfest, and Rifflandia, playing alongside the likes of Radiohead, Anderson .Paak, and Lana Del Rey.

mariegoestoshows.wixsite.com/mariegoestoshows
Related ItemsBusty and the BassEddieInstrumentalKillbeat MusicLPmontrealQuebec
← Previous Story Sluice unveils new video for “Électrique”
Next Story → Weekly Beat Down – May 17, 2021 to May 22, 2021